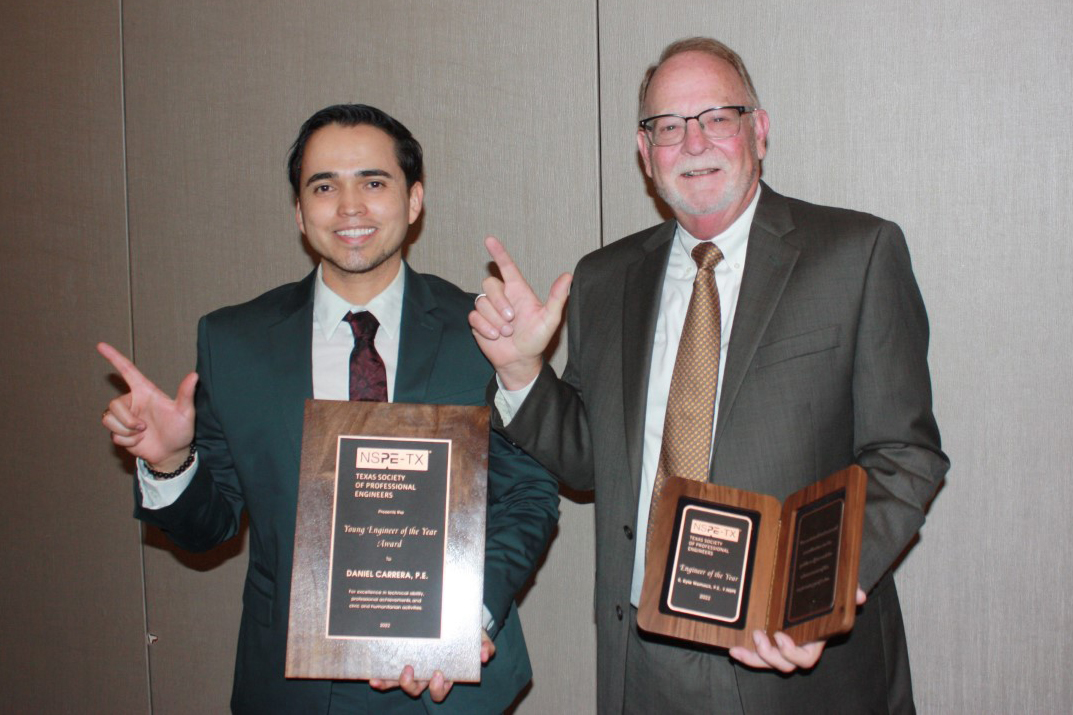 They came to Texas Tech University a generation apart, but Kyle Womack and Daniel Carrera found themselves sharing an awards ceremony in Houston earlier this summer when Womack was named Engineer of the Year and Carrera Young Engineer of the Year for the State of Texas.

The honors are bestowed annually by the Texas Society of Professional Engineers (TSPE). While Texas Tech engineering alumni have claimed each of the awards in the past, 2022 was the first time the university has held both at the same time.

“These recognitions show that the next generation of leaders in the civil engineering field are being taught at Texas Tech,” said Venky Shankar, department chair for the Department of Civil, Environmental and Construction Engineering in the Edward E. Whitacre Jr. College of Engineering. “Texas Tech continues to play a significant role in shaping leaders in the profession.

“The simultaneous recognition of these individuals shows that the department has built up a reputation for inter-generational impact.”

A native of Odessa, Texas, Womack graduated from Texas Tech with a degree in civil engineering in 1975. He spent the bulk of his career working as a consulting engineer for Parkhill, Smith & Cooper, a multi-discipline firm with over 500 employees.

During his 43 years with Parkhill, primarily spent in Midland, Womack helped change the landscape of the Permian Basin and the surrounding area. He was the principal-in-charge of redesigning the terminal for the Midland International Air and Space Port and the city's multi-purpose sports complex, which included a 5,000-seat professional baseball stadium and a state-of-the-art 18,000-seat football stadium.

“Everything I have been able to do in my career was built upon the foundation that was laid for me at Texas Tech in the civil engineering department,” Womack said. “Not only from a technical expertise perspective but also from a professional standpoint – the importance of professional engineer licensure, ethics and involvement – all my professors exemplified that.

“At Parkhill, we did a lot of work around Midland and over the course of my time there we built or rebuilt just about every part of the airport. But we did a lot of work in both large cities and smaller communities around us as well. We really were able to make an impact in a substantial part of West Texas, primarily with all facets of civil engineering and architecture.”

The TSPE Engineer of the Year for Texas award was a recognition of Womack's dedication and leadership in the field of professional engineering.

“It was surprising to me, as I told the group, to be recognized at this stage of my career,” Womack said. “My 'use-by date' is approaching. But it really is an affirmation of your peer group appreciating your career, people who I've known going on 50 years now.”

Nearly four decades passed between Womack's graduation and Daniel Carrera's arrival in Lubbock from El Paso, but the two men share many of the same qualities and express similar sentiments about their education at Texas Tech.

A 2013 civil engineering graduate, Carrera credits Texas Tech with instilling in him a love for giving back to the community.

Wanting to be closer to family, Carrera moved back to El Paso after spending a year working for an engineering firm in Lubbock. But when he moved, he took the values of Texas Tech with him.

“The education I received at Texas Tech, my professors and classmates really challenged me and prepared me for the engineering world,” Carrera said. “That work ethic and discipline translate to other facets of my life. Everyone is so friendly and giving at Texas Tech and in Lubbock, and really showed me the value of treating people with respect and doing things for others.

“From the first time I stepped foot on campus in 2010, the people of Texas Tech and Lubbock always welcomed me with open arms. I got involved with student organizations and I believe that is where I first started to love the art of giving and being generous. I volunteered at the Lubbock Long Term Care Nursing & Rehabilitation (formerly MiCasita) and loved seeing the faces of people there as I spent time with them.”

“I love promoting STEM in the community at area high schools, El Paso Community College and the University of Texas at El Paso (UTEP),” Carrera said. “I've made it a priority to bridge the gap between professionals and students, where students can feel comfortable talking to professionals; helping their confidence and potentially leading to internships and employment.”

But his community service doesn't stop there. Carrera has served as president of the American Society of Civil Engineers (ASCE) El Paso Younger Member Group for the past two years, is a chapter director for the TSPE El Paso Chapter, volunteers his time as the ASCE student chapter practitioner advisor at UTEP and stays involved in the youth ministry and organizations at his church.

As a leader for those organizations he's coordinated a YMCA donation drive for Afghan refugees housed at Fort Bliss; brought the ASCE and TSPE together to sponsor COVID-19-impacted families at a local hospital, personally delivered gifts to the impacted families; worked with the ASCE UTEP student chapter and TSPE El Paso chapter to host a blanket, food and toy drive for orphans in Ciudad Juarez, Mexico; and serves on the Career and Technical Education board to provide feedback for area STEM teachers.

“Commitment to the profession of civil engineering is personified by one's conduct of duties as a licensed professional engineer. It is the ultimate responsibility that a graduated engineer can have: safeguarding public health first and foremost, and second, the designing of built environments that stand the test of time. Texas Tech graduates stand out in this regard.”

Texas Tech alumni who have been named Young Engineer of the Year include LeEarl Ann Bryant, the first female recipient of the award; Jay M. Edwards, the current CEO of Parkhill; James B. Stinnett, currently a vice president with Zachry Group; Jack M. Young, currently a program manager at Halff Associates; and West.