Outgoing Raider Reds Unmasked at 2022 Passing of the Guns Ceremony 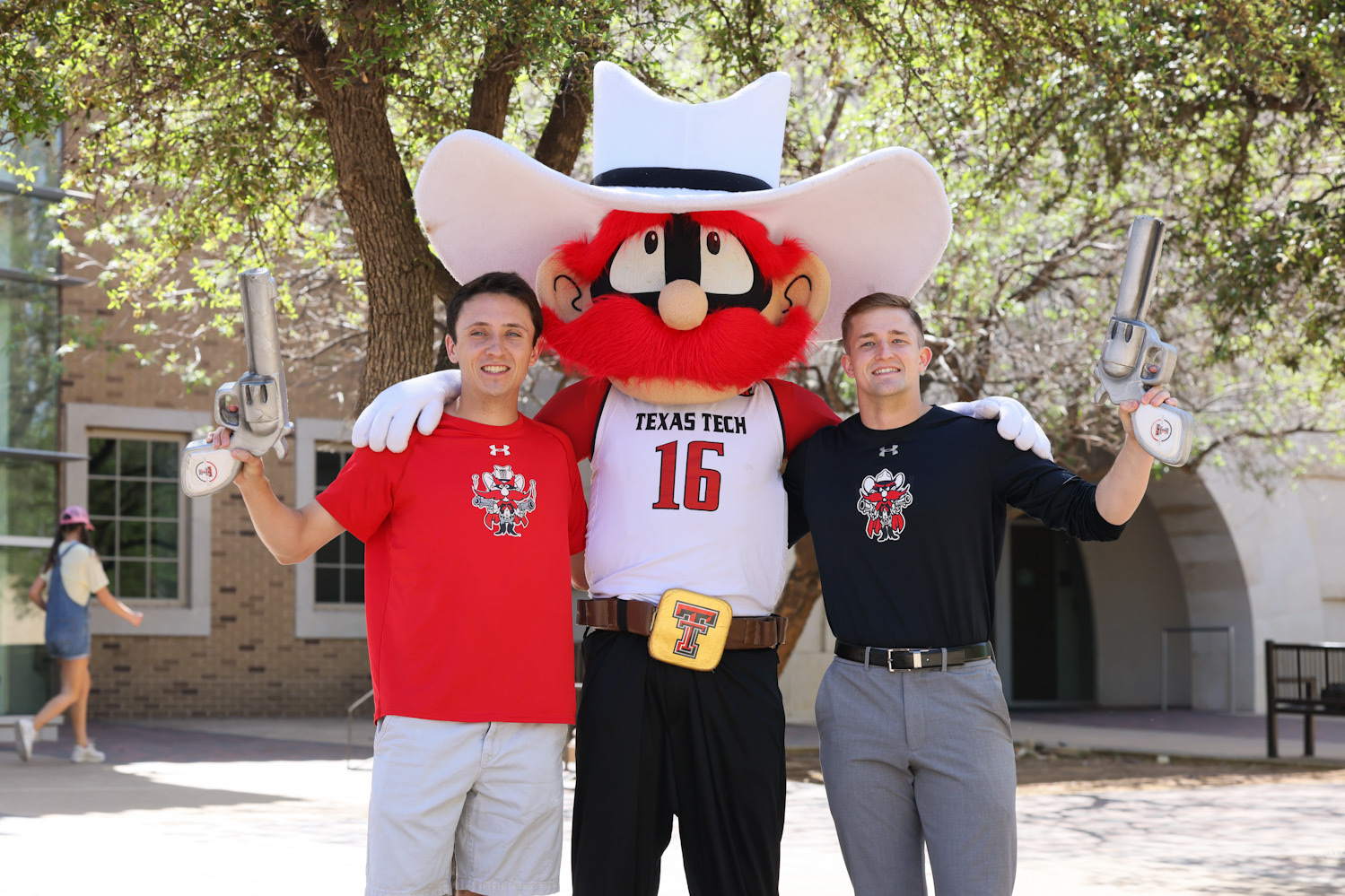 Saddle Tramps Regi Lane and Brandt Schneider served as the beloved mascot for the 2020-21 and 2021-22 academic years.

Texas Tech University students Regi Lane of Bridgeport and Brandt Schneider of Midland were revealed today (April 29) as the students who jointly served as the official Raider Red mascot for the 2020-21 and 2021-22 academic years. The two were unmasked at the annual Passing of the Guns ceremony at the McKenzie-Merket Alumni Center.

Texas Tech's costumed mascot was born in the early 1970s when the Southwest Conference passed a rule that prohibited live animal mascots at out-of-town games. With the Masked Rider as the official mascot, Jim Gaspard, then a member of the Saddle Tramps, created the Raider Red character from drawings by cartoonist Dirk West to represent the university at off-campus football games.

“I am so incredibly proud of Brandt and Regi,” said Bruce Bills, head cheer and mascot coach. “It's been a genuine pleasure working with them for the past three years, and I wish them all the best in their future endeavors. Their legacies will live on long after they leave Texas Tech.”

Schneider will graduate with a bachelor's degree in civil engineering and begin working for a local civil engineering company in August. Lane graduated with dual bachelor's degrees in general business administration and agricultural and applied economics in December, and currently is pursuing a graduate certificate in autism instruction. He plans to spend a year working and traveling after completing his education.

Prior to becoming Raider Red, Lane and Schneider served as Raider Red's assistants during the 2019-2020 academic year, supporting former mascots Jacey Ross and Triston Colquett in their duties and stepping into costume when needed. While it's atypical for students to spend three years in the Raider Red Program, COVID-19 largely brought Raider Red's career to a standstill; consequently, Lane and Schneider reprised their roles for the 2021-22 academic year.

Below, they share some of their memories as the beloved mascot.

What was it like to represent the university and the Spirit Program as Raider Red?

Schneider: Being able to represent the university and the Spirit Program on such a significant level was a true blessing. Wherever I go, I am always trying to represent myself and the group I am part of to the best of my ability. The university and the Spirit Program mean so much to alumni, faculty and students across the country. Given the COVID-19 pandemic, it was a great opportunity to give people something to remember and smile about during such a dark time. The Spirit Program at Texas Tech is one of the best in the country, and I could not be prouder to have accomplished as much as we did these past three years.

Lane: It was awesome to make so many people laugh and smile. It truly was an honor to represent the university, the Spirit Program and the West family for the past three years.

What was your favorite part of being Raider Red, and did it live up to your expectations going into the role?

Schneider: Going into the Raider Red program, I did not have many expectations other than that I was going to be a redheaded cowboy for the next few years. I had zero mascot experience and knew very little about the program and what was expected of me going into it. I started out very nervous and anxious about what I could do and what I could get away with, not being as animated as I should've been. Then, COVID-19 hit and brought everything, including the Spirit Program, to a halt. The second year, we were all bound by the pandemic, and it was hard to enjoy the character and interact with people knowing everything that was going on. Once COVID-19 started to calm down, that's when I would say everything really started to come together, and I began to enjoy myself and not take the role too seriously. We finally got to travel with the athletic department, continue our normal appearance schedule and the role started to take shape for me.

My favorite part of being Raider Red, as stereotypical as this might sound, was being able to make people smile and laugh during such trying times. Everyone at Texas Tech, even at other universities I got to visit, loves Raider Red! People see the character and it immediately brings a smile to their face. I think that speaks volumes to the creators of Raider Red - Jim Gaspard and Dirk West - as well as the Spirit Program for the progress we have made with the character.

Lane: Making people's days better was the best part of being Raider Red. There are so many smiles and laughs I can remember throughout my career as the mascot. You never know what hardships someone is experiencing, so positively impacting everyone I encountered as Raider Red was amazing. I was asked to try out for Raider Red by some former mascots and initially I didn't think it was for me, but when I auditioned, I fell in love with it. Being Raider Red has far exceeded my expectations.

What memory will stick with you, and why?

Schneider: While there are many memories to choose from, one vivid memory I will remember is winning the National Cheerleaders Association (NCA) Mascot Championships in Daytona Beach, Florida in 2021. After everything that happened with COVID-19, the stress of school and the constant uncertainty, it was an incredible feeling to bring home a national championship for the program that provides so much atmosphere to our university. Being able to have that memory with my family and friends alongside me is something I will never forget.

Lane: Winning our first National Championship is my favorite memory. We went into the competition not knowing much, but we worked hard all year on music, props and characterization and it paid off. It was really awesome to do something historic for the program and now winning the National Championship is an expectation for Raider Red – not just an insurmountable goal.

How difficult was it to stay quiet and in character?

Schneider: I am a shy and introverted individual, so staying quiet inside the suit was an easy task. However, I don't know if I can say the same for Regi! Once you put the Raider Red head on, you have to take the character over and sell every inch of it. That's what makes Raider Red so enjoyable and unique – the character and attitude reflect West Texas and it's a great mascot for Texas Tech.

Lane: I'm a talker, so it was tough to stay quiet during the first couple of weeks in the suit. But, just like anything else, with practice and time it became easier. Even now, I catch myself gesturing for things instead of saying what I want out loud.

What are your plans after you pass the guns to the next Raider Red? Any advice for them?

Schneider: Once I graduate, I will be working for a civil engineering company here in Lubbock. So, I will not be going very far. My advice for the upcoming Raider Reds is to enjoy every minute you can inside the suit. My colleagues and I got our time cut short because of COVID-19 and it was a gut-wrenching feeling. While I was fortunate enough to have another opportunity in the program, really make sure to enjoy it while you can. There is no other job out there where the university, community and alumni love and enjoy what you do like being Raider Red.

Lane: I plan to take a year to work and travel. It's tough to do either with the sporadic schedule that comes with being Raider Red. My advice for the incoming mascots is to have fun and understand that Raider Red is about others, not yourself.

Is there anything else you'd like to mention about being Raider Red or your time at Texas Tech?

Schneider: Choosing to do something out of my comfort zone and push myself these past few years is the best decision I made in college. I never would have thought I could be a collegiate mascot and perform on the national level until I decided to take a chance and try out. I have made some of the greatest memories alongside some of the greatest and most hardworking people on the planet. The Spirit Program here at Texas Tech is something else and anyone who gets the opportunity to be part of it should take that chance!

Lane: Being Raider Red was an unbelievable experience because of the Texas Tech community. We are so blessed with awesome students and fans who love Texas Tech and Raider Red. Thank you for making these past three years so much fun.