From Loss to Learning 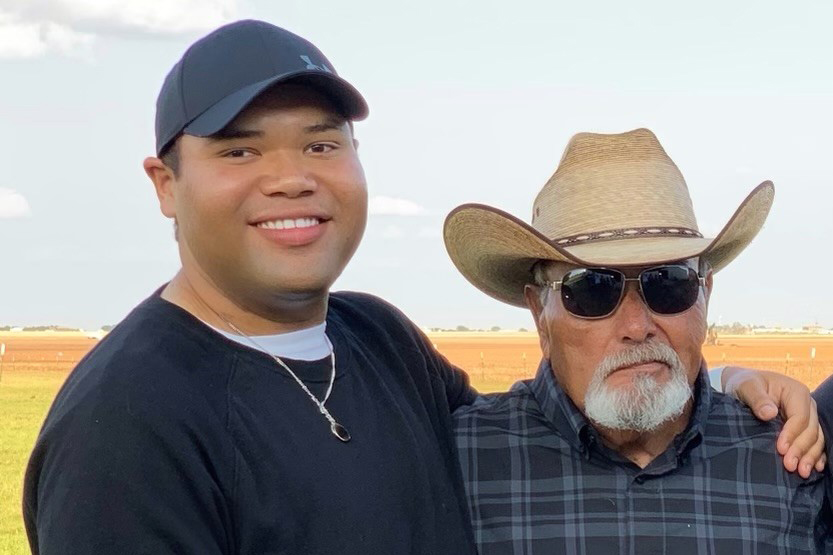 Kirk Balderas took one of life’s hardest setbacks and let it fuel his curiosity as an undergraduate researcher.

It can be a haunting question for anyone who must ask it.

It's a question Kirk Balderas asks himself when thinking of his late grandparents. The fourth-year Texas Tech University student lost his grandmother and grandfather within a few years of each other – both taken by cancer.

“My grandmother died of cancer and diabetes-related complications and my grandfather died of kidney cancer,” Balderas said. “They lived in small-town Texas and didn't have many medical resources unless they drove into Lubbock.”

Which they were hesitant to do.

“They were Spanish speakers and struggled to communicate in a mostly English-speaking health care system, so they avoided going to the doctor,” Balderas said.

And while putting off a doctor's visit for a year or two is never a great idea, Balderas' grandfather was actively in physical pain, but still was too nervous to see a doctor.

“Watching what my grandmother went through scared him, I think,” Balderas said.

Before passing away, Balderas' grandmother spent a lot of time in the hospital. Rather than providing comfort or support, her hospital stay was full of frustration due to the language barrier. She was often confused and would have to wait, sometimes more than 24 hours, for a bilingual family member to get off work and come translate for her.

After seeing his wife go through that, Balderas' grandfather lost his remaining trust in the medical system.

“In the last year of his life, my grandfather was in a lot of pain,” Balderas said. “By the time he finally agreed to see a doctor, it was too late. He had stage IV cancer.”

Balderas took his grandfather home and cared for him in the time they had left.

“Obviously, no one lives forever,” Balderas said, “but I've often wondered if I could have had more time with my grandparents had they met a compassionate doctor who spoke their language.”

So while there is nothing he can do for his late grandparents, Balderas realized there might be something he could do for others.

Balderas wasn't planning to go into medicine. The Plainview, Texas, native started school at South Plains College (SPC) as a music major. It was during a tour of a science lab at Texas Tech, however, that his interest in science, technology, engineering and mathematics (STEM) was piqued.

“I joined a program called Plains Bridges to the Baccalaureate Program while I was at SPC,” Balderas said. “The program is a partnership between SPC and Texas Tech to help first-generation students with an interest in STEM graduate from college.”

During an event with the program, students got to tour Naïma Moustaïd-Moussa's research lab at Texas Tech. Moustaïd-Moussa is a Horn distinguished professor of nutritional sciences and is director of the Obesity Research Institute (ORI). Her research specifically looks at the role of fat cell inflammation and its link to obesity.

Balderas instantly recognized how important this research was for those looking to overcome unhealthy lifestyles and diabetes-related challenges. Balderas transferred to Texas Tech as a biology major and set up a meeting with Moustaïd-Moussa.

“I was a young undergraduate and I didn't have experience that qualified me to work with her, but I had to try,” Balderas recalled.

And whether it was his enthusiasm or persistence, or both, Moustaïd-Moussa recognized a true passion in Balderas that she encouraged. So as a second-year student, Balderas started working in the lab at the ORI and has been there ever since.

However, while Balderas has stayed on with the lab, he changed his major from biology to Spanish.

“I still plan to go to medical school, but you don't need a STEM degree to apply,” he said. “Actually, medical schools often are interested in applicants with more academically diverse backgrounds.”

Balderas realized that continuing in STEM research while becoming fluent in Spanish would create the strongest skill set for what he hopes to do in the future.

“I want to set up a network of hospitals that can serve the Spanish-speaking population and ensure they receive the same care as anyone else,” he said.

Balderas explains that while doctors may diagnose and treat people fairly across the board, Spanish speakers' care still suffers because of nuances that get lost in translation.

For example, there are words in Spanish that have no direct English translation. One such is anteayer, which loosely translates to “the day before yesterday” in English, but is still not exact. If a patient is trying to communicate when their symptoms started, knowing details such as these is critical.

“Some people get confused when they learn I'm studying Spanish because I grew up in a Spanish-speaking household,” Balderas said. “But there is a major difference between the Spanish I picked up from my parents and Spanish language and grammar.”

While many second- or third-generation Mexican Americans speak the language, Balderas says they cannot read or write in Spanish.

“I knew enough Spanish to communicate with my family, but I knew if I wanted to practice medicine in Spanish, I needed to master the language,” Balderas said. “I'll need to write prescriptions and read research in Spanish. That's why I decided to major in Spanish now and then pair it with medical school later.”

Since Balderas changed his major from biology to Spanish, his work in Moustaïd-Moussa's lab has become even more important to him.

“Working on this obesity research is helping me keep my math and science skills sharp,” Balderas said.

So sharp in fact, Balderas recently won an award at an international conference hosted by the Society for the Advancement of Chicanos/Hispanics and Native Americans (SACNAS) in Puerto Rico.

SACNAS holds its NDiSTEM conference every year. It's the largest multidisciplinary and multicultural STEM event of its kind and allows undergraduate and graduate students to present cutting-edge research.

“The research looks at eicosapentaenoic acid (EPA) which is a kind of omega-3 fatty acid,” he said. “EPA has anti-obesity and anti-inflammatory effects, which is very beneficial in treating non-alcoholic fatty liver disease.

“Our lab found that EPA is able to treat and prevent fatty liver disease in mice so we're looking at how it could be used to do the same for humans. To treat any liver disease in humans, the only treatment now is lifestyle and diet change. We also know that's hard to maintain for many people. So, we're hoping that introducing more EPA into someone's diet could help get them going in the right direction.”

According to Balderas and his colleagues, while many people associate fats with weight gain, many fats are good and even needed to create energy and burn stored body fat.

“EPA is one of three healthy fats,” he said. “There also is alpha-linolenic acid (ALA) and docosahexaenoic acid (DHA). Many of these omega-3 fatty acids can be found in fish, avocados and plants.”

This is the kind of information Balderas wants Spanish speakers to have more access to.

“We take this for granted in the English-speaking world,” he said, “but some of this information is not translated well, or at all. My family lives in a rural community and they only have one grocery store. Sometimes even that is picked over, so they find themselves in a food desert.”

Balderas said while some people may drive 30 minutes to shop at a bigger store, many elderly Spanish speakers do not.

“Because of limited access to fresh foods, their diets suffer, and you see a higher rate of diabetes,” he said. “If we can educate people on how to get nutrients from the foods they do have access to, liver disease and liver-related issues could decrease.”

Educating Spanish speakers on nutrition and wellness will always be a passion for Balderas because of his experience with his grandparents, but he isn't waiting for a white coat to start teaching.

As part of the Plains Bridges to Baccalaureate program, Balderas spends his free time tutoring undergraduates in biology.

“I enjoy working with students and getting them excited about undergraduate research,” Balderas said. “It's especially important to encourage first-generation students that STEM is something they can do.”

While there may always be lingering questions around Balderas' grandparents, he is creating answers to as many questions as he can in the meantime.

“Good health care is inaccessible to a lot of people in this country,” he said. “When you don't speak the primary language, it makes the process that much harder. I want to change the system so people feel confident seeing a doctor, making nutritional choices and managing their lives.”

The Department of Classical & Modern Languages & Literatures is a gateway to languages and cultures from across the globe. We offer instruction in many languages and offer exciting opportunities to study abroad. Our mission is to represent the diversity of human cultural achievements and experiences through the development of international language skills.