Distinguished Alumnus Puts Serving Others As His Most Important Life Pursuit 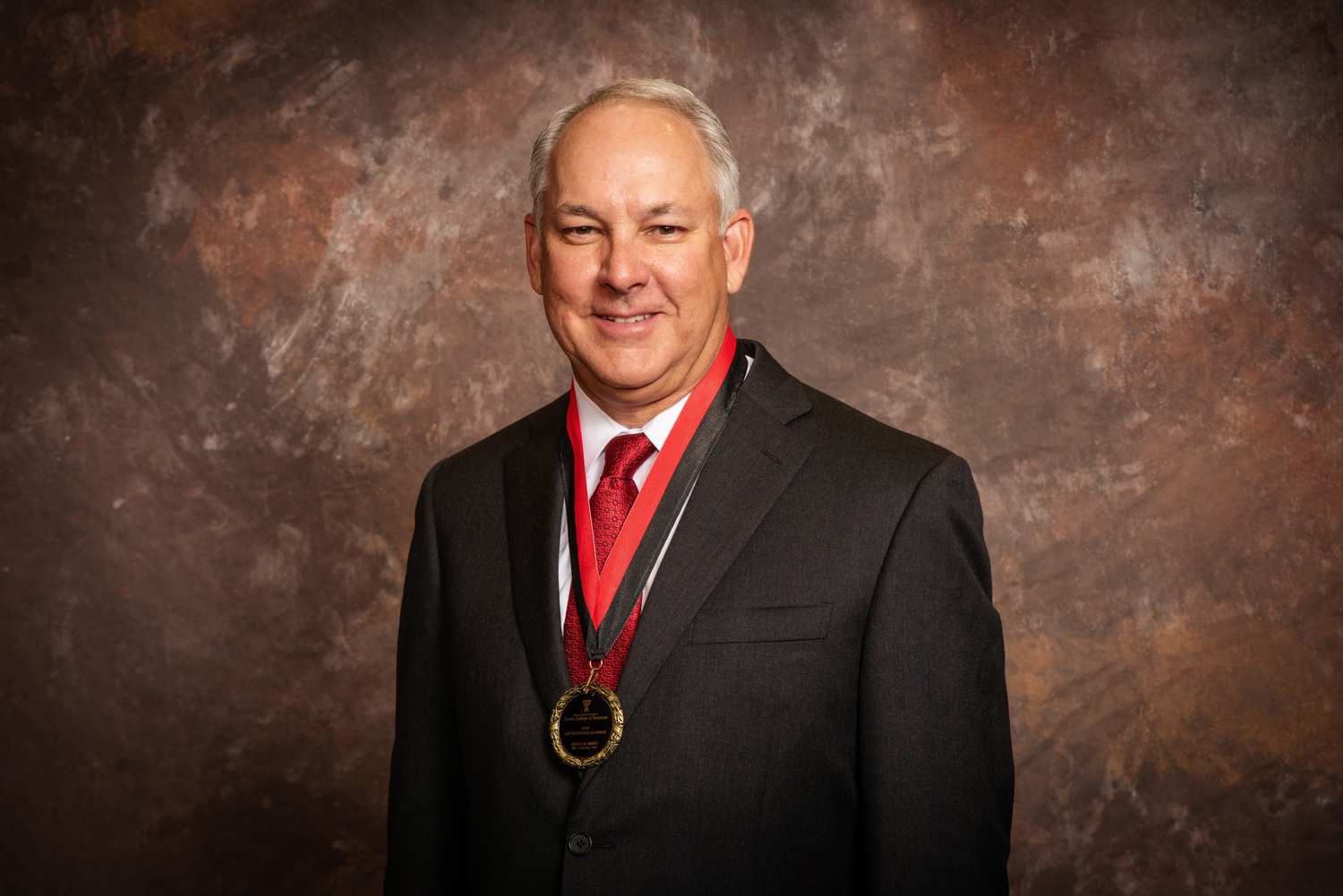 People often set the goal in life to raise their standard of living.

What if instead, a person raises their standard of giving?

A simple adjustment of words, but the true implications could be life changing for someone on the receiving end of the gift.

This is the hope of Kenny Smith, 2019 Distinguished Alumnus of the Jerry S. Rawls College of Business.

The 1983 Rawls College of Business graduate and his wife Joanna have been strong supporters of the college. Smith retired as the vice chairman and leader of the financial services industry at the big four staple, Deloitte LLP - serving in an industry he loves for more than 36 years – providing strategy, risk management, governance and consulting services to multiple, diverse financial companies with a focus on banking.

It was through Smith's work with Deloitte that he and Joanna decided to partner with the Rawls College of Business Dean Margaret L. Williams and Deloitte to create a university gift-matching program, the Kenny and Joanna Smith Family Strategic Initiative Endowment for Rawls College.

“For Joanna and me, it's about responsibility,” Smith said. “I grew up in Lubbock and we didn't have two nickels to rub together most of the time. To be able to experience some of the successes and tremendous opportunities we have enjoyed, it's a tremendous amount of responsibility to look back and pave the way for others.”

Deloitte Foundation, has historically matched up to $7,500 per donor per year. For Smith that wasn't enough. He wanted to make Texas Tech a strategic matching school for Deloitte, matching up to $25,000 per donor, per year. Their most recent gift to the Rawls College endowment? A $50,000 + $50,000 matched by Deloitte.

“The purpose of this was to give the dean additional resources some to be competitive,” Smith said. “Dean Williams is out there looking for those opportunities where she can make a difference in some people's lives long-term. That's what we want to have happen with this endowment.”

So, how did Smith reach this philanthropic place? Well, it might be easier to answer the question by going back to the beginning and why Smith decided to make the trip to Texas Tech and Rawls College.

Smith's family has been a staple in Lubbock dating back to the early days of the community. One of his grandfathers laid the bricks that make up the streets of downtown during the Great Depression. Smith attended Coronado High School and he and his sister became first generation college students.

It's important to note enrollment at Texas Tech and the add/drop process today is quite a bit different than it was a decade ago, let alone multiple decades.

Instead of hopping online at a specific time to register or make adjustments, long lines were protocol, and they were for 18-year-old Smith at the former Lubbock Municipal Coliseum as he looked to decide where he would spend the next few years of his college life.

The goal, as Smith tells it, was to get into the coliseum early to get the classes one wanted before they filled up.

“When I was an entering freshman, one of my high school teacher's husband was in law school at Texas Tech, and I had decided I was going to go be a lawyer. I was going to register for pre-law. His counsel to me was to back up and consider some other options in case I changed my mind over the next four years,” Smith recalled.

“If you're not the lead sled dog, the view is all the same.”

Smith's natural gravitation to accounting created some opportunities along the way at Texas Tech and then in the corporate sector at Deloitte.

There is a reason Smith spent the better part of four decades providing opportunities for others and their businesses to grow before retiring in May 2020. This remains a cornerstone of Smith's long-term goal of passing these same opportunities on to others.

“One of the things we were able to do is increase the Deloitte Foundation investment in the business school with alumni who work in Deloitte,” said Smith. “My hope from a Deloitte perspective is to really double down and use these new, enhanced matching opportunities along with the masses Deloitte represents to be a leader and to help Rawls continue to move forward.”

An area Smith continually alluded to as he has worked with Rawls College as a student, alumnus, graduate and partner has been his experience with the faculty and staff at the college. It should come as no surprise he holds them in high regard.

“When I was in school, I was a typical 18-year-old worried about getting to class - worried about studying, worried about getting in trouble with your professor,” Smith said. “As a graduate who has stayed connected to Rawls, which I particularly have done and enjoyed over the years, I am especially inspired about how much they cared about the students. It's about the quality of those professors - whether it was Robert Ricketts or Herschel Mann.”

As Rawls College continues to grow, so does its influence in the corporate realm. Smith said he is amazed during Rawls Advisory Council meetings by the caliber of alumni out in the world today – contributing on a grand scale.

“I'm sitting with the advisory council that I've been a part of for the last 10 to 12 years. If you look at the successes a lot of the alumni have had out of the business school, it's pretty darn impressive especially with so many of them giving back a lot,” Smith said. “I think Dean Williams has done a fantastic job of building the next legacy there.”

Better to Give Than Receive

It's been said often it is better to give than receive. Smith couldn't agree more. He believes the opportunities through his experience at Rawls College and time with Deloitte have positioned him to create more hope not only for current students but future ones as well.

“We feel we have a tremendous amount of responsibility,” he said. “There are others in West Texas and elsewhere who need a little bit of a hand - a little bit of sponsorship to find their path. It's really important for us to try to provide that.”

Smith has been influenced by so many over the course of his life, from his parents, friends, family and professors at Texas Tech to mentors and colleagues at work. It seems fitting one of his favorite quotes came from his time at Deloitte.

“There was a CEO of ours who had a great quote I still use a lot,” recalled Smith. “‘I base my success on the success of my successors.' That's exactly the way I feel. It makes me feel happy and whole when I look and see some of the success others have whether it's life or in business. As long as you are paying it forward and helping your successors be successful, that's a much better way to judge your success.”

Hopes for the Future

Thousands. This is Smith's estimation of how many Rawls College students have moved into positions of influence not just at his former company Deloitte, but also at large corporations around the globe.

Smith is convinced even more can be done to expand the school's footprint by increasing the opportunities for students who may not have thought a business degree from Rawls College was even a possibility. This process will require constant adjustments to meet those needs – adjustments he said were key to aiding students while working for his former employer.

“To be able to designate Texas Tech as a strategic school at Deloitte allowed us to increase the investment in Rawls College with matching funds from the foundation,” said Smith. “If we can invest and fund more and engage with Rawls College more, hopefully we get more candidates from Texas Tech to join the firm.”

If you ask Smith his thoughts on future possibilities tied to his alma mater and Rawls College, he is adamant the sky is the limit.

“I think it's nationally a very under-recognized and under-ranked program,” said Smith. “I don't want to be ranked with Princeton, Harvard, Columbia, Yale or Stanford. I think we will continue to make salt of the Earth, very successful, incredibly capable business leaders of the future coming out of Rawls.

For those that would like to give to the Jerry S. Rawls College of Business much like Kenny and Joanna Smith have done, please consider donating to the Rawls Dean's Strategic Initiative Endowment. And don't miss an opportunity to learn more about the company matching through the Texas Tech University Office of Advancement.