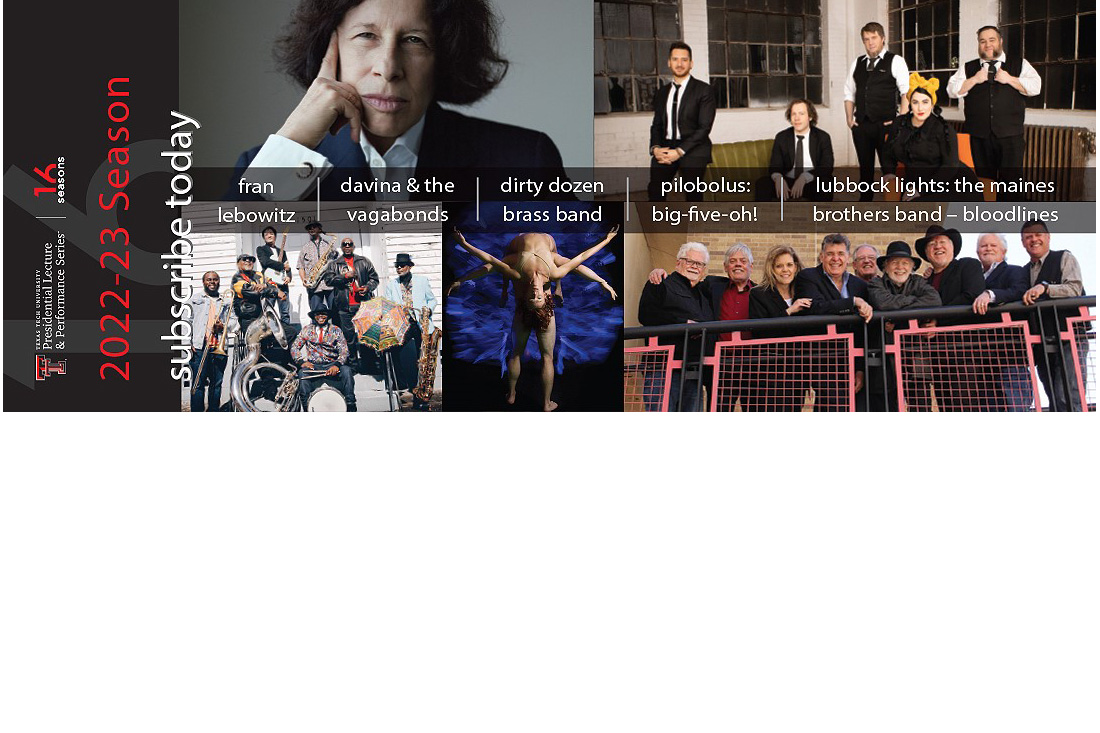 This season’s performances will include Fran Lebowitz, Davina & The Vagabonds, Dirty Dozen Brass Band, Pilobolus and the Maines Brothers Band.

Texas Tech University's Office of the President will host the 16th season of the Presidential Lecture & Performance Series. This season boasts a lineup of Emmy Award-winning speakers and performers, along with a special Lubbock Lights festival in conjunction with the 45th Lubbock Arts Festival.

“True to its mission, the Presidential Lecture & Performance Series provides the audience an impactful experience by recruiting unique talent from around the world to Texas Tech,” said Texas Tech President Lawrence Schovanec. “More than entertainment, the series provides learning opportunities for our students, and we look forward to another engaging season.”

Created in 2006 by then-Texas Tech President Jon Whitmore, the series' mission is to enhance the intellectual and cultural landscape, of not only Texas Tech, but also of Lubbock and the South Plains. It was important to Whitmore that the series be a celebration of inclusion and diversity on campus and throughout the community.

This year's events include:

An Evening with Fran Lebowitz

In a cultural landscape filled with endless pundits and talking heads, Fran Lebowitz stands out as one of the nation's most insightful social commentators. The recently Emmy-nominated author, journalist and social observer offers her acerbic views on current events and the media as well as pet peeves including tourists, baggage-claim areas, after-shave lotion, adults who roller skate, children who speak French or anyone who is unduly tan. The New York Times Book Review calls Lebowitz an “important humorist in the classic tradition.”

A new spin on an old sound, Davina & The Vagabonds have created a stir on the national music scene with their high-energy live shows and commanding stage presence. With influences ranging from Fats Domino and the Preservation Hall Jazz Band to Aretha Franklin and Tom Waits, the band is converting audiences one show at a time, from Vancouver to Miami and across Europe.

Formed in 1977, The Dirty Dozen Brass Band are the pioneers of the modern New Orleans brass band movement and are referred to as the brass band equivalent of Duke Ellington. Celebrating over 40 years Dirty Dozen Brass Band has taken the traditional foundation of brass band music and incorporated it into a blend of genres including Bebop Jazz, Funk and R&B/Soul. This unique sound, described by the band as a ‘musical gumbo,' has allowed The Dirty Dozen to tour across 5 continents and more than 30 countries, record 12 studio albums and collaborate with a range of artists from Modest Mouse to Widespread Panic to Norah Jones.

Pilobolus is a rebellious dance company. Since 1971, Pilobolus has tested the limits of human physicality to explore the beauty and the power of connected bodies. They continue to bring this tradition to global audiences through our post-disciplinary collaborations with some of the greatest influencers, thinkers and creators in the world. Over the past 50 years, Pilobolus has performed around the globe in events ranging from the Oscars to the Olympics.