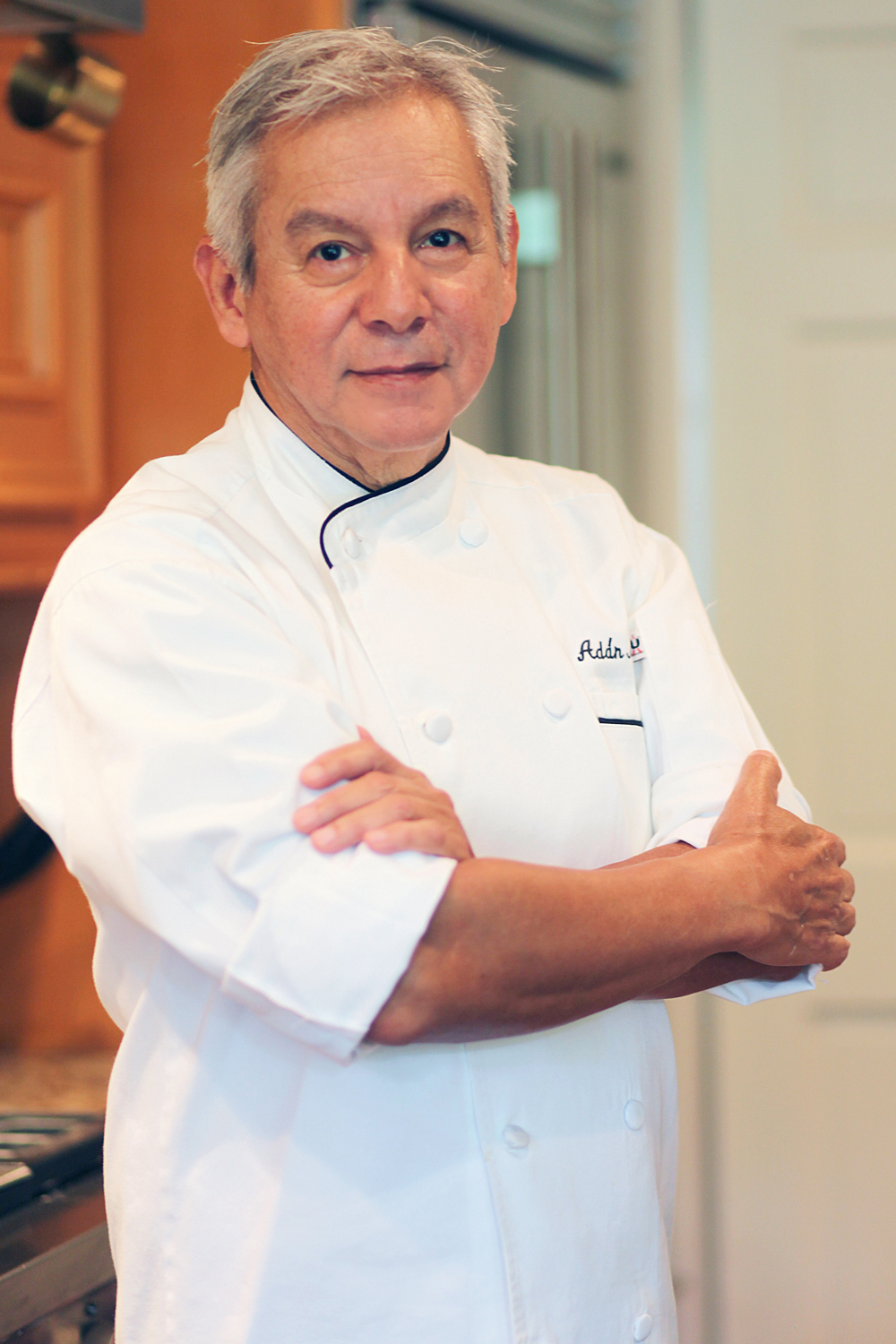 The scent of tortillas from freshly ground corn, picking avocados from a tree and running his fingers over coarse salt are etched in his mind.

Cooking isn't a hobby or even a career to Medrano; it's an identity.

And much like an individual's identity can go through turbulent times, so can a culture's identity. Medrano's life work is to reclaim and celebrate his culture's history by telling the story of its food.

Raised in San Antonio, Medrano often spent time with family in Nava, Coahuila across the Rio Grande in Mexico. In his mind, Medrano saw the land as one landscape. He had family on both sides and so the land was as cohesive as his own family.

As he grew older, he recognized that others didn't see it that way, and while his ancestors had lived on the land for thousands of years, new fissures and borders were erasing some of his culture's most beloved traditions.

As Medrano saw the rise of “Tex-Mex” cuisine take-off across Texas, he longed to reconnect people with the food that had been on the land for so long. After first earning a bachelor's degree in philosophy and journalism and then a master's degree in radio, television and film, Medrano applied and was accepted to the Culinary Institute of America.

It's never been enough for Medrano to be a great storyteller or a great chef; he was determined to be both. With experience from working with the White House, the Vatican, Cannes Film Festival, CBS Television and the National Endowment for the Humanities, to producing his own feature-length documentary and working as head chef in restaurants throughout North America and Europe, Medrano has a resume as rich as his food.

In celebration of Hispanic Heritage Month, Texas Tech University's College of Human Sciences, Department of Hospitality and Retail Management and Division of Diversity, Equity & Inclusion will host Chef Medrano for a dinner and book signing at 5:30 p.m. Wednesday (Sept. 21) at Skyviews Restaurant.

In anticipation of the event, we spoke with Chef Medrano to learn how his passion for storytelling, culture and food have created such a fascinating career.

After studying at the Culinary Institute of America and cooking in so many places around the world, what are the problems you observed that you wanted to solve?

I will break that answer down in two parts. The first is the erasing of history. Through my experiences, I saw many experts dismissing Native American history and the history of Mexican American families from Texas.

Many people in Texas have this worldview that Texas is founded by and liberated by white people. And if you're brown, then you came from ‘over there.' That's simply the worldview that's taught in schools. And when I was at the Culinary Institute of America, I realized how embedded that worldview was even in their curriculum. They looked at natives from Chihuahua as almost evil. One of the lesson plans said that the northern tribes ate their young. Those are my ancestors, and I knew that wasn't true. It was a closed-minded way of seeing the world and dismissed what was different.

But the bottom line is people are missing out on delicious food. They've been enjoying “Tex-Mex,” which tries to imitate our food, and that's OK, but it doesn't do a very good job. I don't want to disparage anybody's food, but you're missing a lot by not tasting these other flavors.

The second problem I saw came down to flavor. One day in class we were making refried pinto beans. So, I'm running around trying to find a potato masher and couldn't find one. The instructor told me there wasn't a masher in the kitchen so to just use a blender. They said, “We're in the 20th century, a blender will work just the same.”

I wasn't going to argue with the teacher, right? So instead, I went and found a tin vegetable can and used it to mash the beans on a cast iron skillet.

After I had mashed them and was stewing and pan roasting them, the instructor comes over and says, “What are you doing?”

He stepped back and asked, “So refried beans aren't a puree of beans?”

I explained there is a chemical reaction that happens to proteins in a pinto bean, it's called the Maillard Reaction and occurs between 280-330 degrees Fahrenheit. When this occurs, the proteins are physically altered, and it completely changes the flavor. The flavor becomes quite meaty. And while it was a European scientist who named the Maillard Reaction, our people had been cooking like this for millennia. When women invented corn tortillas and subsequentially engineered the molecular process called Nixtamalization, they themselves were experimenting with the best way to maximize the protein in food. So, the history of this literally goes back to women who lived 5,000 years ago.

Why is it important to celebrate Hispanic Heritage Month?

Language is something we all must live with. There are many words about our culture that I don't like, but we must use them because that's all we've got. So, we use “Tex-Mex” and “Hispanic.”

I always joke and ask whose ‘panic' is it? Is it his-panic or her-panic? I never use Hispanic to refer to myself or to my community. I will use Mexican American or indigenous, but there are many words. I think what's interesting is to accept all the terms and have them lead to an experience of the land. Once you accept that we have an affinity to the land of Texas you recognize this is an ancient place. Texas is an ancient land. The oldest house in North America is 13,000 years old and it's right outside of Austin. The things we surround ourselves with today are not new ideas, but the reclaiming of ancient cultures and realities that long pre-date us.

So, Hispanic Heritage Month is a time to think about anchoring ourselves to the planet, to this space on the planet, taking care of it, looking back at our ancestors and how they were in ethical relationship to ingredients, to the trees and to the earth.

This month is a time to reimagine ourselves incorporating some of those values, if not all of them. It is really about grounding. I think the labels come and go; as I said, I don't like many of them, but if we push past that and connect to the ideas and history those labels represent, we have an opportunity to focus on something wonderful.

In your opinion, what is the relationship between food and storytelling?

They are one and the same. When we cook, we narrate our history.

Next May in Houston, I am having an event called “Encuentro” – Spanish for “Encounter.” I'm going to invite 10 chefs to cook Texas Mexican food and over two days, we're going to be sharing food. We're also going to invite four scholars and we will publish the proceedings. And then at the end, there will be a meeting with 250 people so we can share the findings.

As the chefs are cooking, I'll be asking them, “How did you learn this?”

“Where does it come from?” “Why is it important to you?

“Why is it important to those whom you feed? What is their reaction?”

Essentially, I'm asking what the story is behind that food, and that's an inherent part of food.

It is a process that is inviting. And that moment when I'm eating a dish you've made, it's so delicious that I remember it. From then on, that memory and me eating it with you is anchored in my memory in the way a good story is anchored in our minds.

What would you say to the Texas Tech students who will be the next leaders in the hospitality and restaurant industry? What's important to understand about culture as they're making decisions around restaurant and cuisine?

They need to prioritize the primacy of food and pleasure in terms of the food. The second thing is the primacy of hospitality and serving. Those two things are very important.

A town or city is, in my view, defined by its restaurants. Restaurants are an expression of the landscape and how that community chooses to express the landscape. The sourcing of food, the ingredients that may be growing locally, and if something is not growing there, it's shipped or imported. The local community has chosen those elements to express something. Those flavors and textures, that visual presentation, all of those are artistic expressions that express what the community feels is beautiful and pleasurable.

And a restaurant truly is the cultural center. That is, a restaurant is always a place of engagement by people around people. A democracy rests on the ability of people to rub elbows with one another. Restaurants are spaces where that can be done.

So, if you're just beginning in the restaurant industry, use your voice and your agency. You are not a machine to be overworked or used for productivity. You are a human being that is contributing. Workers' rights and collective bargaining are important. If this industry is going to grow, it cannot be on the backs of those suffering, but rather, through a collective expression of something beautiful.