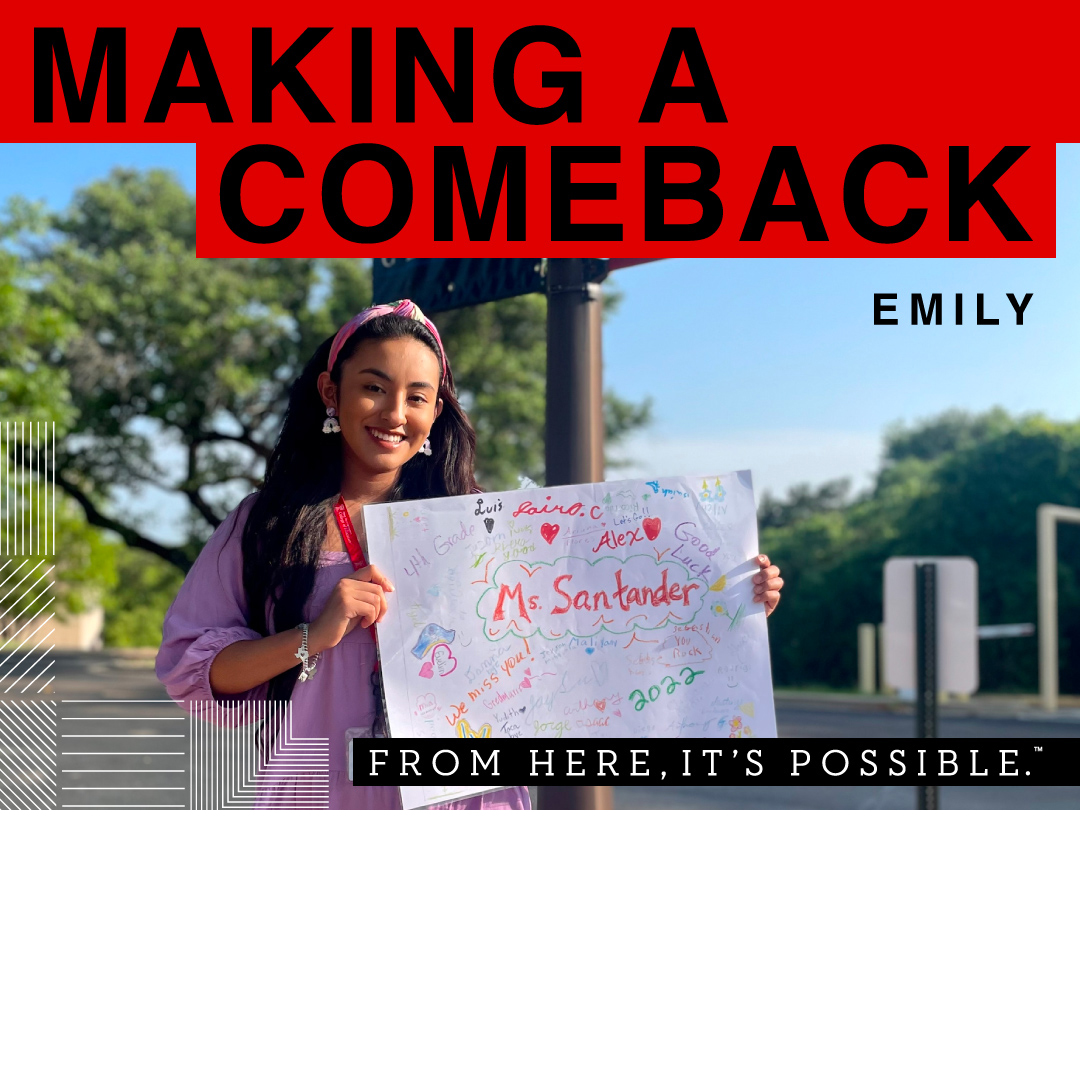 For Emily Santander, making a comeback means going back to first grade.

‘Back-to-school' is a time of year that evokes nostalgia for many. For others, it can mark the beginning of an exciting, yet uncertain journey. It can be a reminder of past setbacks and anxieties. However, the Red Raider spirit has never been defined by fear, but rather, by pushing through it. That's what four Texas Tech University students are doing this fall as they stage their comeback.

Emily Santander's first language was Spanish, so she remembers what it was like going to elementary school and facing a language barrier, which is why she has decided to go back to where it all began.

“I'm just excited to be in first grade,” she said.

As a senior early childhood education major at Texas Tech University at Waco, Santander has begun her first full year of student teaching at La Vega Elementary in Bellmead, Texas.

And although going back to the first grade may not be the typical back-to-school experience for most college seniors, Santander's passion for education means she is exactly where she wants to be. In fact, after graduating high school, Santander was certain about two things: She wanted to become a teacher, and after finishing community college, Texas Tech was her school of choice.

While Santander was enrolled at McLennan Community College (MCC) in Waco she was introduced to the TechTeach Across Texas program at Texas Tech at Waco, and suddenly, her dreams of becoming a teacher and going to Texas Tech got a lot closer to being reality.

“Instead of moving to Lubbock, I decided to stay here,” she said. “I could be close to home, and I knew the programs they offered were perfect for me.

“It was really nice to be able to maintain the job I had while still being close to my family and achieving the same goals I would have if I'd gone to Lubbock.”

Going into her final year at Texas Tech, Santander has become the first student from the TechTeach Across Texas program at Waco to earn teaching certificates in both English and Spanish. And with them, she hopes to provide the same educational and emotional support to her students that her elementary school teachers gave to her.

“My experiences as a young English learner highly influenced my choice of pursuing a career in bilingual education,” she said.

In fact, Santander credits her own bilingual teachers with giving her the tools necessary to pursue higher education.

“I had amazing teachers growing up that could speak both English and Spanish, which really helped me succeed,” Santander said. “My teachers were the reason I was able to speak English fluently, and they gave me a good foundation for my future in college.”

Now, Santander wants to lay a similar foundation in her classroom and provide her first graders with the same opportunities to succeed.

“Just as I had an amazing support system in elementary, I want my students to feel understood,” she said.

Santander says she can see the connection between her students and her younger self.

“I know that a lot of students have similar backgrounds to mine, especially at La Vega, around 50% of the students there are Hispanic,” she said.

Having walked the same uncertain road which her students now face, she wants them to know that they are seen, heard, and, most importantly, that they are not alone.

Santander feels it is essential that her students are comfortable in the classroom and around her, and she hopes to foster that positive atmosphere by building relationships with her students and developing a sense of trust.

“I know that they need somebody who understands them and who knows how to help,” she said.

But Santander goes beyond simply understanding her students. She knows them because she was them.

“Now that I have experienced being in a dual-language classroom, I can see the similarities I shared with my students when I was in their shoes,” she said. “Many of them also are older siblings, speak Spanish at home, are emergent English language learners, enjoy the same music I do, and will be first-generation students.

“I understand their frustration when they can't read an English word correctly or start speaking ‘Spanglish' to their friends because they are fluent in both languages.”

Santander is confident in her path forward; a path that serves the needs of her community and beyond by beginning to fill the role of a bilingual educator amidst a growing teacher shortage.

And while it may have been difficult to be the first student in her program to earn bilingual certificates, Santander says it is an honor and a privilege to open these doors for others and pave the way for more students like herself to become bilingual educators.

“I'm really excited to be the first one to go through the program and lead the way for prospective students who also want to be certified as a bilingual teacher,” she said.

With the opportunities provided by Texas Tech at Waco, Emily Santander has made her come back and proven that, even over 300 miles away, From Here, It's Possible. ™

TechTeach Across Texas is our fast-track, one-year teacher preparation program, combining intense clinical experiences with applicable online courses in district-based partnerships around the state. You will receive classroom coaching from skilled, experienced Site Coordinators and Mentor Teachers, and be able to immediately apply principles from your practical coursework.

TechTeach Across Texas allows students to complete a Bachelor of Science degree and earn teacher certification in one calendar year.

Our  program has earned top marks from the National Council on Teacher Quality, placing it in the top 35 programs in the nation.