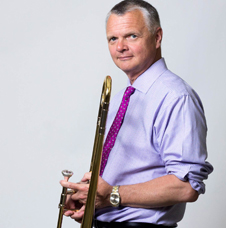 The piece will premiere at the Texas Tech Jazz Ensemble's spring concert at 7:30 p.m. Saturday (April 23). The concert will be held at Hemmle Recital Hall in the Texas Tech School of Music.

“This is a wonderfully unique opportunity for students in the School of Music,” Jones said. “Not only will they perform a new work written specifically for them, but they'll get to work with and be directed by the composer himself. Bret brings decades of experience as an educator, composer, arranger and performer of the absolute highest caliber.”

Zvacek has performed with The Woody Herman Orchestra, Kenny Wheeler and numerous other jazz artists. He also has served as the musical director of the Central New York Jazz Orchestra (Syracuse) since 2005, collaborating with artists including Phil Woods, Hubert Laws, Bobby Watson, Joe Locke and others.

In 2011, Zvacek was commissioned to write the multi-movement work for jazz orchestra, “A White Horse From Jerusalem” which featured National Endowment for the Arts (NEA) Jazz Master David Liebman as soloist.

Zvacek has written big band music for numerous professional and student ensembles, for orchestra and concert band, and has arranged and conducted horn and string tracks in various studios. He also has held teaching positions at the University of North Texas, McGill University and the State University of New York (SUNY) Potsdam and currently serves as a clinician and performing artist for the Yamaha Corporation of America.

The concert is free and open to the public. Parking is available in the R11 lot south of the School of Music.