A Half-Century of Service 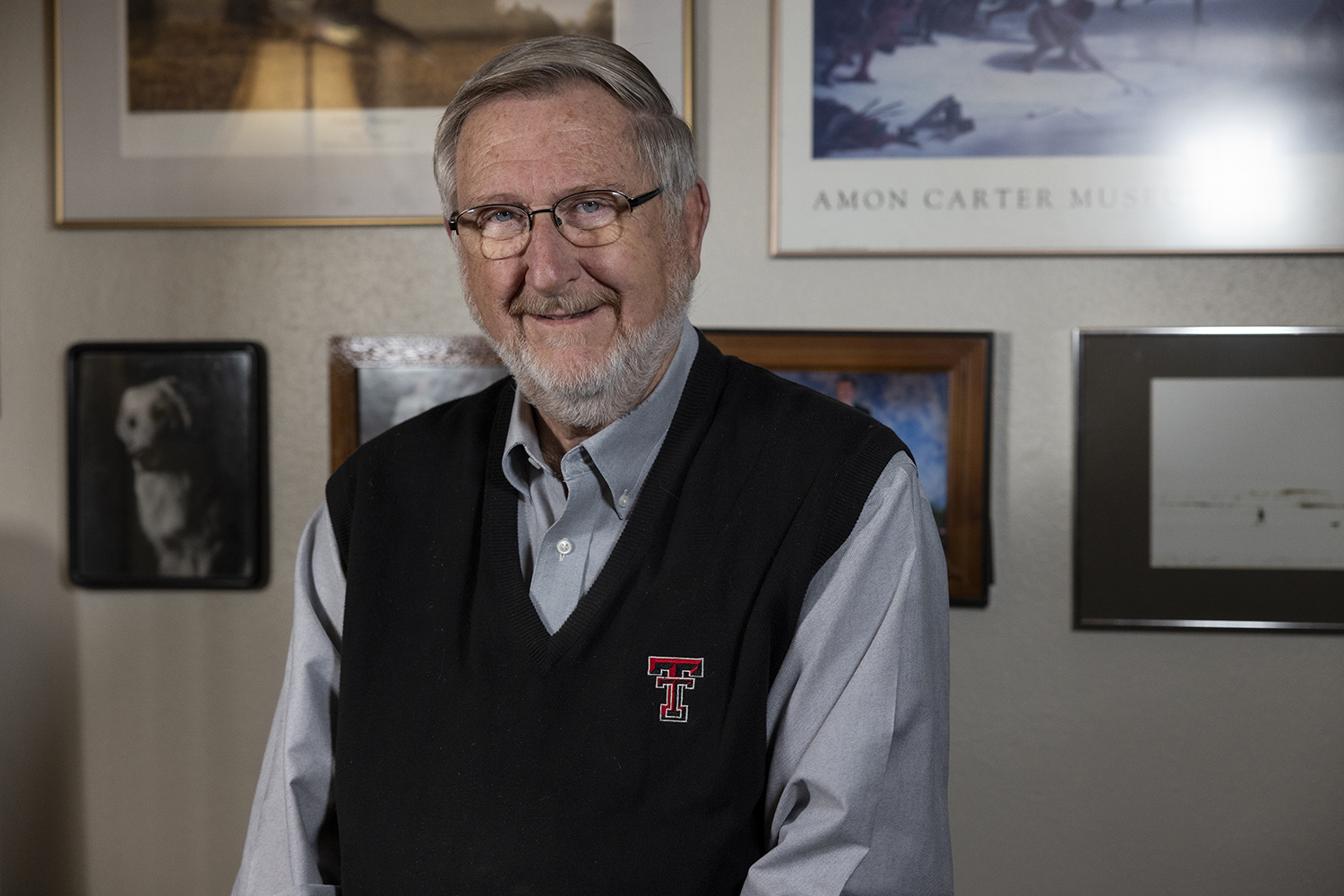 Philip Marshall, a professor of Cognition & Cognitive Neuroscience in the Department of Psychological Sciences, has dedicated more than 50 years of service to Texas Tech University. With a major current interest in cognitive anthrozoology, or the study of human-animal interaction (HAI), Marshall is particularly interested in the way humans process information about companion animals. His other research interests include the comparison of aesthetic and religious experiences, and various phenomena pertaining to human memory.

Marshall was hired as an assistant professor of psychology in the fall of 1971 and became a full professor in 1984. In 1998, he accepted a position as chair of the Department of Political Science, where he served for 11 years before becoming assistant dean of the College of Arts & Sciences. Marshall served as assistant dean for three years before returning to the Department of Psychological Sciences full-time, where he dedicated himself to the study of HAI and the psychology of art.

Marshall and his colleague, Jim Smith, then a professor in the Whitacre College of Engineering, co-chaired Texas Tech's Institutional Review Board for the Protection of Human Subjects (IRB) – an organization dedicated to upholding ethical standards in research with human participants.

During his tenure at Texas Tech, Marshall has directed, advised and served on numerous other committees and student organizations, including the Graduate Council, RaiderReady, Mortar Board, Psi Chi and Yellow Caped Raiders, a student organization that raises puppies who will become service dogs. He was a member of the 1974 Championship Texas Tech Men's Faculty Basketball League, co-founded the Texas Tech Lacrosse Club in 1975, and later became an intercollegiate lacrosse official.

Marshall's research has been supported by the Department of Health, Education, and Welfare (HEW), the National Institute on Aging (NIH), the United States Air Force and several private foundations. He has also been a collaborator on research projects with the U.S. Army and Air Force research laboratories. Most recently, Marshall completed a joint research and advisory program on HAI with colleagues from the Republic of Korea. He graduated two doctoral students last year and is currently advising three new doctoral students as they pursue their degrees.

In what positions/roles have you served while at Texas Tech? Can you describe your research and its impact, both in academics and society?

I am an experimental psychologist trained to conduct basic research in cognitive psychology, with broad interests in the areas of human perception, learning and memory. Over the years, those efforts have taken various directions as influenced by emerging trends and opportunities, as well as my own and students' evolving interests. These research activities have been supported, at least in part, by federal agencies, branches of the U.S. armed forces, and private foundations. The particular topics have ranged from investigations of how people use various mnemonic devices to learn and remember information, to how elderly people perceive and monitor their motor behavior (e.g., walking) as influenced, perhaps, by arthritis, to many other factors that affect learning and memory.

My current research seems to have taken two directions. The first is an ongoing interest in human-animal interaction. Our earlier work in this area included the factors that affected people's earliest memories of a pet as compared to their earliest memories of a friend. Surprisingly, earliest memories of pets were often viewed as being negative, and text analysis of those reports often referred to the loss or death of a pet. Early memories of a friend were much more positive. We also have investigated the relationships people have with their pets and compared how their human-human romantic relationship styles might predict their attitudes towards pets. People with more positive relations and romantic satisfaction had better attitudes towards pets.

My other area of research involves how we perceive and respond to art and the nature of aesthetic experiences. A question in recent literature is whether the aesthetic experience from an exposure to art is unique, or whether such an experience – which includes a feeling of detachment and otherworldliness, experiencing goose bumps, and a sense of awe – might be more general and not unique to art or beauty. In our study, we have found that aesthetic experiences that may occur in a museum or gallery are very similar to religious experiences reported in a place of worship.

I also have been a collaborator on a variety of applied projects with the research laboratories of the U.S. Army, Navy and Air Force. Those projects dealt with a broad range of issues from developing remote-learning capabilities and platforms, to assessing visual information processing and even to determining whether interrogators can effectively use nonverbal cues to detect lying.

Did you ever imagine being at Texas Tech this long?

I never imagined being anywhere this long, but once about four decades had passed, the idea of setting a long-term goal intrigued me, so here I am. I actually taught John Opperman, Texas Tech's former interim president, as well as Mark Webb, former chairman of the Philosophy Department, and his lovely wife when they were undergraduate students “a few years ago.” Recently, an undergraduate student in my Principles of Learning and Memory course told me, “You know, you taught my grandmother in this course!”

What's the secret to maintaining a career for so long? Any advice for someone who is just starting their career at Texas Tech?

My advice would be what a sociology instructor told me when I was at the University of Rhode Island pursuing my bachelor's degree. She said that the secret to life was to wear several hats, meaning, of course, that a person should consider having more than one outlet for one's energies and interests. When I was directing the Freshman Seminar Program – now known as RaiderReady – we stressed that students should get involved in some group, organization or activity outside of their studies, so I believe that same advice would pertain to those starting a new career at Texas Tech.

What kinds of changes have you seen during your time at Texas Tech?

Well, of course, the physical campus has changed radically, and current populations of students reflect societal and cultural norms and dispositions, but the core values of education and research have largely remained the same. For example, within my first year at Texas Tech, the College of Arts & Sciences dean, Larry Graves, formed committees to stress collaborative research and the formation of new “institutes” to accomplish that goal. To some extent that general strategy of collaboration is still an emphasis for research success today.

What have you enjoyed the most about being a Red Raider?

I have been a program site visitor of the American Psychological Association for many years, which involves visiting campuses across the U.S., and that has given me some degree of perspective regarding life at Texas Tech compared to other institutions. What I have come to believe through that external experience, and my own experiences at Texas Tech, is that, among other things, on our campus the individual is allowed to engage in their own interests, innovations and investigations, and is supported while doing so.

Do you have a favorite Texas Tech memory or tradition?

Of course, my favorite memories are of former friends, colleagues and students, but perhaps also of the large commencement ceremonies I attend. I was a first-generation college graduate and am the father of four children who are college graduates. I'll admit to “welling up” a bit when parents, especially parents of first-generation graduates, give an enthusiastic and supportive “yelp” when their student's name is called.

What does being a Red Raider mean to you?

I chose the academic life while pursuing my doctorate from the University of Illinois (Champaign-Urbana). I believe when someone makes that decision you are beginning a new life. You are what you do, and you are fortunate enough not to call it work. Certainly, you have many responsibilities, expectations and authorities that you must address, promote and complete, but you become a new person when you adopt and maintain the academic career path. This university has been part of my reshaping, a metamorphosis, if you will. Phil Marshall woke up one day and was a professor!

What are your plans for the future?

I think 55 years of service is a nice number. I wonder what that pin will look like!