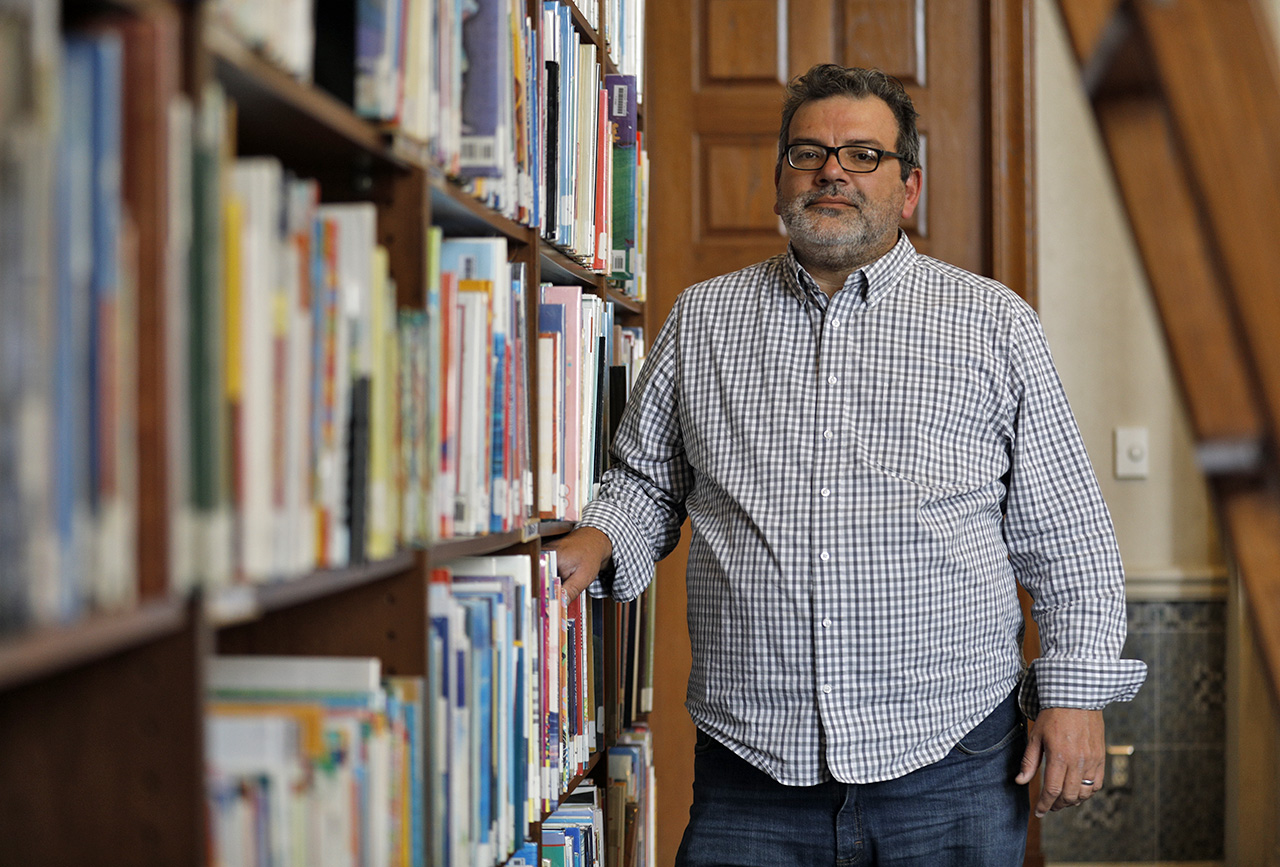 René Saldaña loves getting into character and reading to children.

“I can't stress enough to teachers – and parents especially – that we've got to read aloud to our kids,” said the author and associate professor of Language, Diversity & Literacy Studies in Texas Tech University's College of Education. “We've got to really enjoy the craft ourselves and impart that passion to our children so they can enjoy the craft of reading for the rest of their lives.”

Saldaña, who has authored more than a dozen children's books and young adult novels, including “The Jumping Tree,” “A Good Long Way” and the bilingual Mickey Rangel detective series, dedicates much of his time and research to promoting literacy among underrepresented populations. For the last six years, Saldaña has coordinated Lubbock Growing Readers, a community-based literacy program in which volunteers read culturally relevant literature to elementary students in historically underserved classrooms. Afterward, each student receives their own copy of the book to add to their personal library.

“We get a copy of a book for every kid, and we knock on doors and invite members of the immediate community who look like, speak like and represent the kids in that school to come read to them,” Saldaña said. “We've had people come in from local grocery stores, hairdressers, activists, health care workers, faith leaders – people the kids recognize and look up to.

“For example, we have asked Alfredo Molina, whose family owns Pronto Mart on 50th Street and Avenue A. The kids at Harwell Elementary and their families would know him since it's a popular spot for breakfast burritos. We also ask elected officials who represent the areas around the schools – Lubbock city council members Juan Chadis and Sheila Patterson Harris have both come to read on several occasions, believing our kids' academic success is vital.”

The first school to participate in the read-aloud program was Bean Elementary, a dual-language pre-K through fifth-grade school with predominantly Hispanic students from economically disadvantaged backgrounds.

“We read Xavier Garza's bilingual picture book, ‘Lucha Libre: The Man in the Silver Mask,'” Saldaña said. “I brought a few Mexican wrestling masks and gave one to the principal, Tom Thomas, and we put them on and went into class and just made fools of ourselves. I think that aspect, where we're willing to just get as crazy as we can with a book and share that entertainment factor, that craziness, with the kids – I think that makes all the difference for them.”

Teachers have told Saldaña that, because of the read-aloud program, their students' voices are coming through more clearly when they read and write, and the students regularly ask when “the people who read to us” are coming back.

“Kids in certain parts of Lubbock don't get the positive attention they deserve,” Saldaña said. “Bringing in community members who look and sound just like them, who are willing to take an hour out of their day to come read to them – just laugh and talk, no quizzes, no tests – well, it's a win-win for all of us.”

Saldaña recalled never having been exposed to Mexican American literature in school, which made him a somewhat reluctant reader.

“I had never seen or heard myself in a book,” he said.

It was not until graduate school when Saldaña wandered into a small bookstore one weekend and picked up a copy of Sandra Cisneros' novella, “The House on Mango Street,” that he finally saw his own culture reflected on the pages of a book.

The novella ignited Saldaña's enthusiasm for literature – particularly that of Mexican American authors – and he began to wonder how many other underrepresented, would-be readers were struggling to relate to literary characters who bore no resemblance to them.

“We need diverse books because we are leaving children behind,” Saldaña said. “It's one of the most unfortunate things, but also one of the easiest things to remedy.”

Saldaña's “Mickey Rangel Mystery” series, which follows the crime-solving exploits of a wise-cracking fifth-grade detective, is unique in its bilingual flip-book construction. The book is split into an English side with an English cover and a Spanish side with a Spanish cover, neither language taking precedence over the other. Most bilingual books alternate between a page in English and that same page in Spanish, relegating Spanish to a secondary position, but that's not the message Saldaña wants to send to young readers.

“If we simply validate who these kids are, we'll give them the power of language, the power of culture and the power of taking responsibility for their own academic success,” Saldaña said. “That power becomes authority.”

Because every child in attendance receives their own copy of the featured book, each read-aloud and book giveaway event costs upward of $5,000. Right now, Lubbock  Growing Readers is trying to secure 500 copies of James Luna's “The Runaway Piggy” for the next read-aloud event at Harwell Elementary. If you would like to support the program and help more children build their personal libraries, you can make a donation here.