Why is Computer Science Unpopular Among Women? 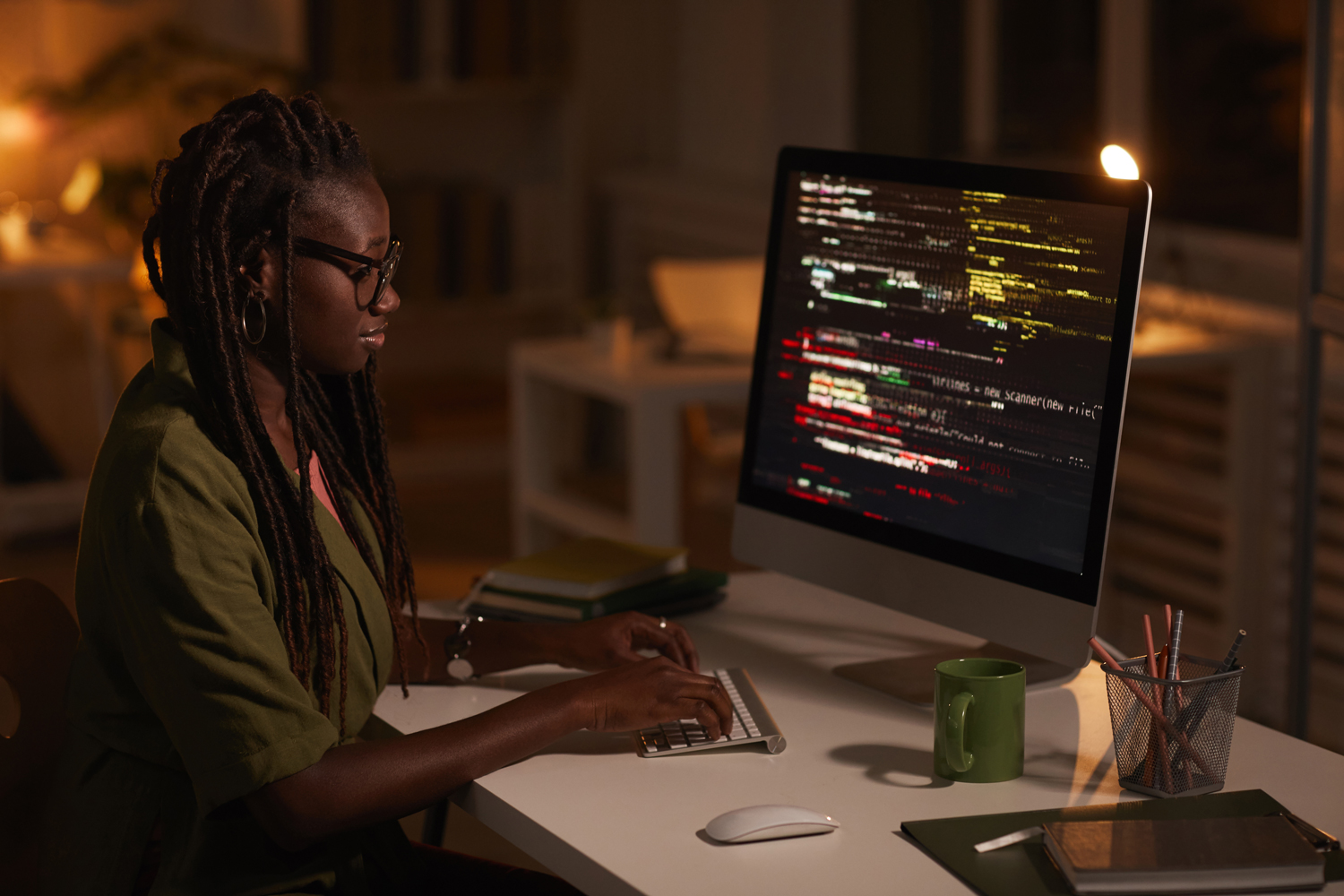 Kevin Harmon and Eric Walden examine theories behind the IT sector’s gender gap.

In the last 20 years, the U.S. has seen a sharp decline in the number of women pursuing college degrees in computer science and information technology (IT). According to the National Center for Education Statistics, although women make up the majority of college graduates, they earned only 19% of the computer science degrees awarded in 2016.

This problem is only growing worse, and Eric Walden, a James C. Wetherbe endowed professor in the Jerry S. Rawls College of Business and director of the Texas Tech Neuroimaging Institute (TTNI), and Kevin Harmon, a doctoral candidate in the Area of Information Systems and Quantitative Sciences (ISQS) at Rawls College, want to find out why.

“This is a large pool of talent we're not tapping,” Harmon said. “I think it's important, as our field is 80% men, for men to take this research topic seriously and study it.”

“It's a big problem because we have a huge shortage of computer science people across-the-board,” Walden said. “We don't know why, but for some reason, women are much less likely than men to choose that pathway. It's a mystery we need to figure out.

Women have not always been so underrepresented in the IT sector, however; they comprised the overwhelming majority of computer programmers in the U.S. during World War II, while much of the male population was fighting overseas.

Computer programming became more popular among both genders in the 1970s and early 1980s, leading to a more balanced gender distribution among computer science students. However, this period of relative equilibrium was short-lived.

“In the mid-80s, about 40% of computer science graduates were women,” Walden said. “Since then, every other field has been improving in terms of gender representation, except IT. It's the only thing that has consistently become less diverse.”

The Atari Shock, a devastating recession in the video game industry spanning 1983 to 1985, caused many prospective computer programmers to rethink their career path. In the nearly four decades since, the industry's once-robust, gender-representative workforce has never again come close to pre-recession levels.

"Women seem to be more responsive to changes in the job market, so while the number of male computer science degree-recipients decreased, the number of females went down even more dramatically,” Walden said.

While these numbers stabilized somewhat in the 1990s, the internet bubble and subsequent stock market crash at the turn of the century further exacerbated the gender gap.

“There was a sharp decline in female computer programmers soon after the tech bubble, and it hasn't ever recovered,” Harmon said.

Although a definitive explanation for the IT sector's gender composition has yet to be uncovered, Harmon and Walden have studied the phenomenon through the lens of three theories of career choice: expectancy-value theory, role congruity theory and field-specific ability beliefs theory.

Expectancy-value theory asserts that people choose career paths commensurate with the degree of self-efficacy they possess. Their career selection is based on their interest in that particular field and expectations of success resulting from confidence in their own abilities.

According to Harmon's and Walden's article, “Comparing Three Theories of the Gender Gap in Information Technology Careers: The Role of Salience Differences,” recently published in the five-star Journal of the Association for Information Systems, “People tend to choose careers that make use of their strongest abilities. However, for reasons yet unknown, an individual woman is more likely to have similar levels of cognitive abilities across a range of subjects whereas an individual man is more likely to have one or few dominant cognitive abilities.”

Based on this theory, women might gravitate away from IT not because they lack the necessary abilities, but rather because there are a greater number of career opportunities available to them elsewhere.

“The biggest thing we discovered was just how equal men and women perceive themselves to be,” Walden said. “Because, basically, every explanation leading up to this point has been that women must lack the confidence, or that women don't feel they can accomplish this, but that's not what we found. Actually, women are like, ‘Yeah, I can do this thing, but I'm just better at this other thing, so I'm gonna go do that.'

“The data we gathered from high school students showed that young men and women are very, very similar. They both have good self-confidence and they're comfortable with themselves, but it just seems that, for whatever reason, the deviations have bigger effects on women.”

Role congruity theory proposes that people choose career paths based on attributes they were socialized to value, which tend to be stereotypically gendered. Men are most often motivated by agentic goals, which involve power, money and individual achievement. Women, on the other hand, tend to pursue communal goals, which involve altruism, social interaction and sense of belonging. As science, technology, engineering and math (STEM) fields are generally perceived to be more agentic than communal, this could partially explain the uneven gender composition in IT.

However, Harmon and Walden note in their article that women now tend to endorse agentic goals as strongly as men, suggesting that men's aversion to traditionally feminine roles – and thus communal career goals – could play a large factor in the IT gender gap.

They write, “Although it has become more socially acceptable for women to take on traditionally male characteristics like agentic goals over the past few decades, acting on communal goals continues to be less socially acceptable for men. Men are less likely than women to internalize communal goals into their self-concept, and men who enter traditionally female careers often expect to experience backlash and prejudice.”

“Within psychology, there's this theory of precarious manhood,” Harmon said. “It's the idea that manhood is hard to win but easy to lose, and you have to try to resist doing anything that can be seen as feminine to avoid retribution for acting out of society's established gender norms.”

Lastly, the theory of field-specific ability beliefs suggests that men and women are stereotyped as having different innate abilities, and that the perceived degree of innate skill required to excel in a certain field is more salient to women than men.

This theory, like expectancy-value theory, does not attribute the IT gender gap to differing levels of competency between genders; rather, it asserts that women place more importance on aligning their career choice with their perceived innate abilities and are therefore disinclined to enter a certain field if they believe their natural talents lie elsewhere.

Men, on the other hand, appear to be much less affected by field-specific ability beliefs.

Harmon and Walden continue, “... if many men believe that IT skills are a relative personal strength compared to other fields, field-specific ability beliefs may not discourage IT career pursuit as strongly. If these men believe that IT requires innate talent, they may interpret their relative personal strength in the field as evidence that they have the innate ability required. Conversely, for men who do not believe they have the innate ability required, they may pursue an IT career anyway because of a perceived lack of other options.”

Considering these significant salience differences between men and women, the commonplace practice of “weeding out” all but the most proficient IT majors through unnecessarily rigorous introductory courses could be detrimental to gender representation.

“You think you're going to get rid of all the people who don't know what they're doing,” Walden said of IT instructors who employ this strategy. “But if you make a course that is specifically aimed at making people feel bad and sending them the signal they don't belong, and one group of people is more sensitive to that signal than the other group of people, it's going to have a differential effect.”

The future of women in IT

“I think this is the most important issue facing IT today,” Walden said, “because if we can employ a more diverse group, we can solve all the other problems. If you want to solve problems, you need to get good people. Well, there's this big chunk of people we're not getting.”

In order to improve gender representation in the IT pipeline and spark the interest of students with little-to-no previous computer science exposure, Harmon and Walden advocate for broader implementation of coding education in secondary school. This could be accomplished by making computer science part of the high school curriculum rather than just an elective.

“For a lot of people, a high school coding class is their first exposure to IT and might be their last if they don't become interested and think, ‘I could learn how to do this,'” Harmon said. “If we could build that advocacy early on without treating men and women differently, it could significantly boost women's interest.”

Harmon and Walden hope their research helps correct common misconceptions that women lack the self-confidence or natural ability required to succeed in the male-dominated computer science industry. They also encourage instructors to reconsider the practice of intentionally weeding out students, especially in introductory IT courses.

“The thing we can control as professors is how many female students we get in the door,” Walden said. “There's no difference in training women, we just need to somehow make them believe that IT is a good choice for them. And we need to discover why they think it's a bad choice now.”