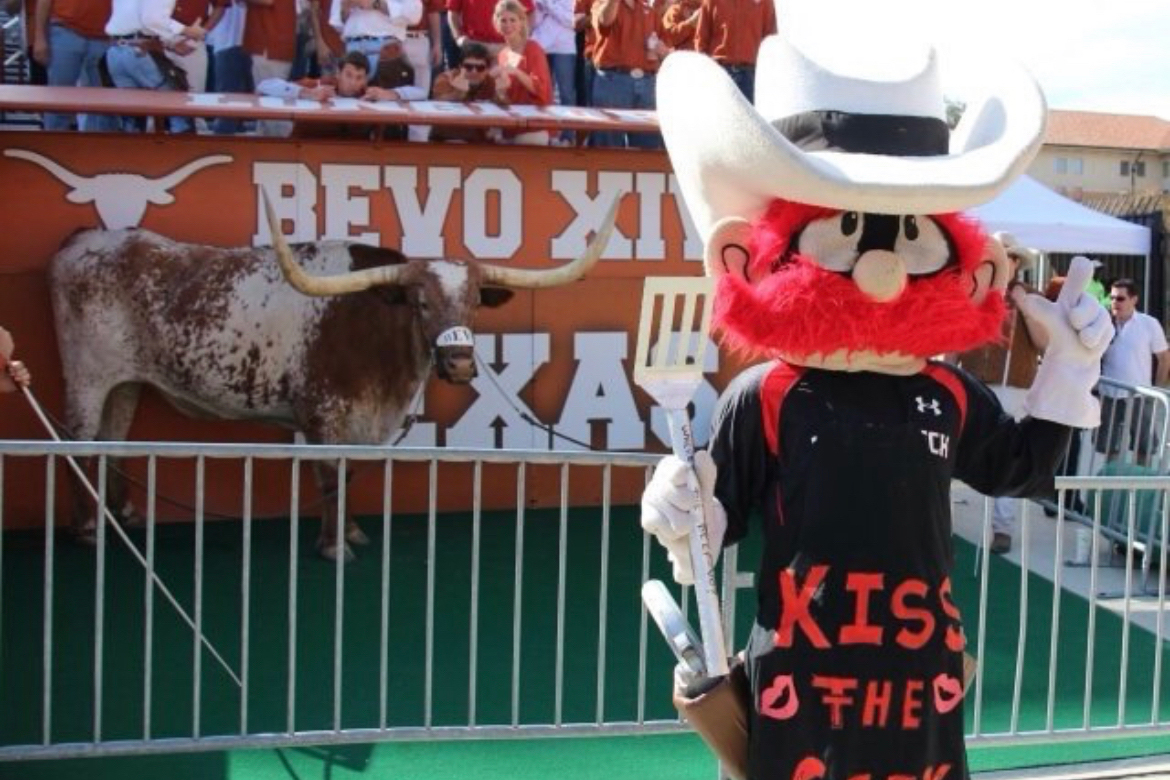 To mark Raider Red's 50th anniversary, a few former Raider Reds spoke on their experience as the notable mascot and what they're up to now. This is the fourth in a five-part series.

Austin native Zach Bohls graduated from Texas Tech in 2013 with a degree in public relations from the College of Media & Communication. During his time at the university, Bohls was able to fulfill a dream: being Raider Red.

He served as the beloved mascot from 2010-13. One of the standout moments was when he was named the 2012 Mascot of the Year for the Capital One Bowl.

Since graduating, Bohls has continued to stay in sports by working in the MLB, NFL, NHL and Major League Soccer (MLS) in different capacities. He also helped create and debut Blooper, the new mascot for the Atlanta Braves. Currently, Bohls is the mascot coordinator for a professional sports team.

Here are his fondest memories of representing Texas Tech as Raider Red.

Why did you apply to be the mascot?

It was a dream of mine since I was young. I guess I always wanted to be a cartoon because I watched them religiously.

Best experience I ever had. To be as plugged in to the community at Texas Tech and know everyone was beneficial in my career. I've always said that I was a part-time student and full-time Raider Red (sorry, Mom).

Besides the Mascot Competition, there really isn't just one favorite memory.

What does being Raider Red mean to you?

It means being the one person who embodies every single tradition, is at every single event and loves even the “worst” parts of Lubbock because it is the full picture that makes the city great and unique. Raider Red is a celebrity and a rock star who lives by the rules such as “Don't ask for permission, ask for forgiveness,” or “You only live once.”

How did it feel to be named the Capital One Mascot of the Year?

Winning the Mascot of the Year for the Capital One Bowl after a grueling 16-week voting and campaigning process was the most rewarding and valuable experience I had in college. I truly had a once-in-a-lifetime experience, and I would give nothing back.

Raider Red has influenced my career in so many ways. I gained so many connections during my time at Texas Tech who I keep up with today. Also, getting to learn the booking and scheduling, time management, how to be utilized in the game and, most importantly, how to entertain crowds at different sporting events and venues. I have worked in the MLB, NFL, NHL and MLS, and getting to work every sport at Texas Tech was a huge advantage for me going into those leagues. All of those hours, weeknights, weekends and early morning appearances were well worth it in my career because I was able to learn so much.

There really are too many to choose from. Whether it was starting the homecoming bonfire in a fully flammable suit in near darkness, being the only student on campus to shoot shotguns on the field of the Jones in front of thousands of people, or crowd surfing hundreds of students you don't know. The list goes on but most of the “crazy” stories I'll keep with Raider Red.

Also, after I graduated, I worked as Blooper, the Atlanta Braves mascot I created. I was working an event at the College Football Hall of Fame and ran into a photo of myself when I was Raider Red that was on display. It was a very surreal and unexpected moment. There also was the time I was cast in a movie as the Masked Rider (as an extra) that starred Finn Wittrock and Aaron Eckhart. The phone call to a few of the Masked Riders I knew during my years were pretty comical after that. The list goes way on, but probably not something I should release to Stephanie Rhodes or Bruce Bills.

Make sacrifices. Take every event you can. Network with everyone. Learn something new every month. Bring an extra pair of clothes.

Seeing the Raider Red program grow since I left is a very humbling experience and makes me miss my time at Texas Tech.