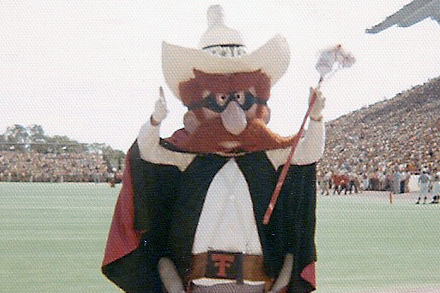 Texas Tech’s beloved mascot turns 50 this year. To mark this milestone, alumnus Stan Alcott reflects on his time as the first-ever Raider Red.

To mark Raider Red's 50th anniversary, a few former Raider Reds spoke about their experience as the notable mascot and what they're up to now. This is the final installment of the five-part series.

Lake Jackson-born Stan Alcott graduated from Texas Tech in 1973 with a bachelor's degree in business management. However, Alcott, who is now happily retired and living in Houston, was a local celebrity when he became the first person to be named Raider Red for a season from 1971-73.

“Raider Red's identity wasn't a secret back then,” Alcott said. “I have a ton of photos from the newspaper with me posing with Raider Red's head on my hip.”

This is Alcott's fondest memories of being the first person to represent Texas Tech as Raider Red.

I was a football walk-on for two years and decided it was time to move on (I was trying to be another “Rudy”). I had helped many friends try out for cheerleader and make it, so I felt that I could transfer those skills as well.

What was it like serving as the very first Raider Red?

Unique, as the first. I was able to give Raider Red life, personality, character and a reputation not only to the university but also the entire Lubbock community. I represented Texas Tech at so many functions during those two years, and every event I went to was self-funded with only the help from a few friends, unlike it is now with scholarships, NCAA mascot competition, entourage, etc. (Wow, I'm jealous). My dad and I spent a lot of time making repairs and improvements those first two years.

Everything I did those first two years was special. Being Raider Red helped me meet a freshman cheerleader who I went with my entire junior year until she went back to Indiana University. I also had two friends I grew up with as teammates who were playing at the University of Texas and the University of Arkansas who I could visit with on the sideline before the games.

Being a special part of Texas Tech history that has evolved over 50 years. I never imagined the exposure Raider Red gets now. At the time, I think everyone thought the ‘no live animal mascot' rule would be reversed, and Raider Red would be a fading memory.

It's great to see the support he has gotten over the years. I can't imagine wearing that lightweight outfit as compared to the 35-pound papier-mâché, chicken wire and plaster-of-Paris head with heavy foam padding for the stomach (which was a great way to lose weight).

Being Raider Red was always a fun topic at interviews (especially if it was a Texas Tech grad interviewer) that I was asked about in the early days after graduating.

My friends still kid me about it during football season or when they introduce me to someone new – especially Aggie and LSU grads.

When I first started as Raider Red, I had to get my own props. One of the things I bought was a stick horse to pretend to ride alongside the Masked Rider. Before a game when the cheerleaders and I would lead the players onto the field, I tripped trying to run with the stick horse between my legs and rolled like Humpty Dumpty and couldn't get up because the outfit was too heavy. The cheerleaders had to help me up. It was very embarrassing because, back then, my identity wasn't kept secret like it is now and everyone knew who I was. I never heard the end of it.

Have a blast but never embarrass Texas Tech, the Saddle Tramps, Raider Red's legacy or yourself and your family. Always be friendly to the fans – especially the kids – and pose for pictures and sign autographs for them. You are a Lubbock hero to them. Keep working on your arm movements and dance moves and be an active part of the cheerleader squad. I led cheers with their microphone in front of the student section back then, even though Raider Red no longer speaks.