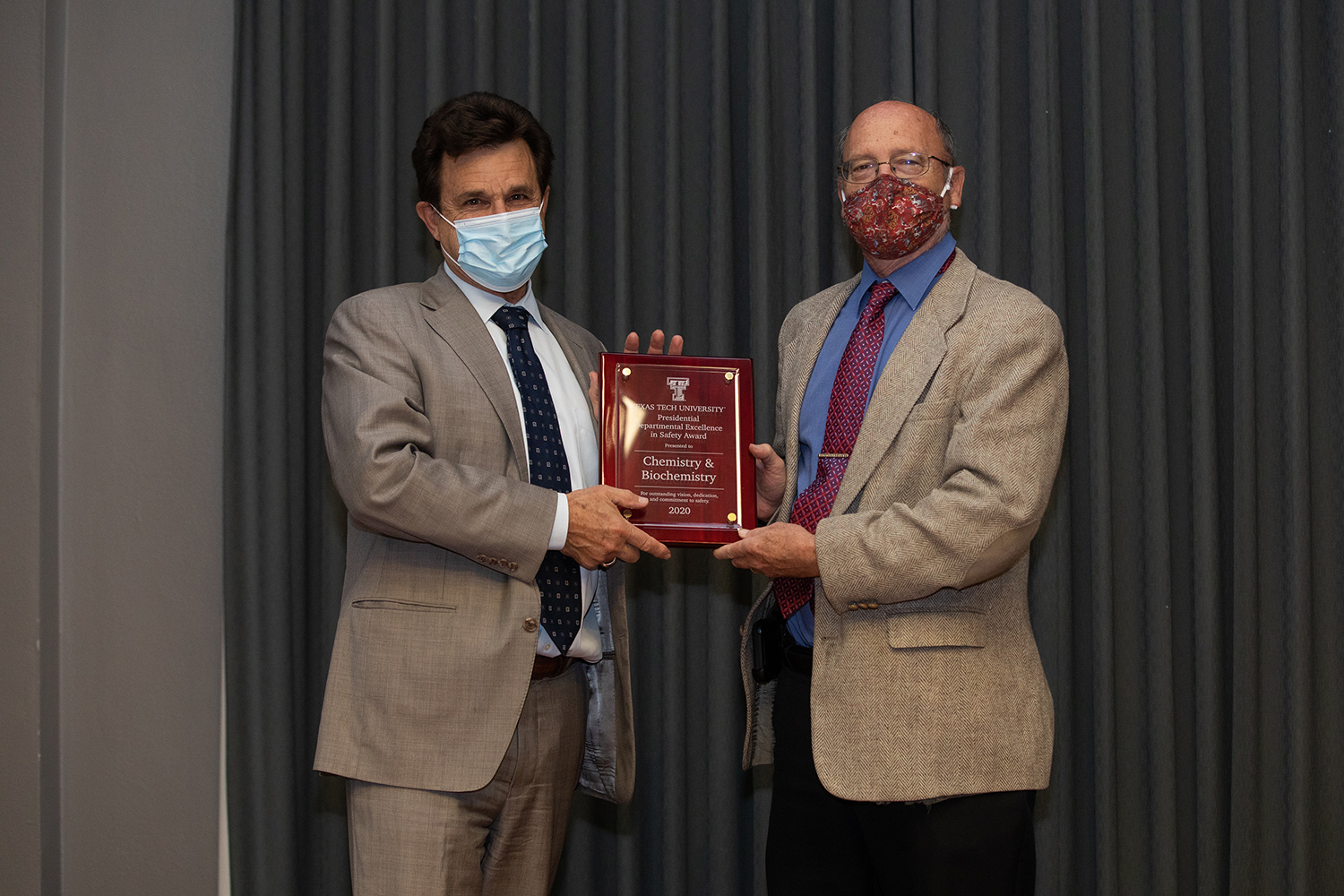 He's now the Minnie Stevens Piper Professor in the Department of Chemistry & Biochemistry, but back then, Casadonte was the department chair. He remembers in vivid detail how a graduate student working with energetic materials was severely injured in a laboratory accident when the compound suddenly detonated.

Many people were touched by the events of that day, and 11 years later, Casadonte is proud to have witnessed a transformation in the department. Thanks to the combined efforts of successive chairs, safety officers, faculty, staff and researchers, the Department of Chemistry & Biochemistry was honored this week with the Presidential Departmental Excellence in Safety Award.

“I said at the time, I never wanted to see that happen again on this campus,” Casadonte said. “This award is a culmination of the years we've put into trying to make that a reality.”

Texas Tech's incident wasn't isolated; it came amid a series of other laboratory accidents throughout the nation, including one at the University of California at Los Angeles in 2008 in which a graduate student died.

In the immediate aftermath of such incidents, Casadonte explained, university leaders have two choices: “They can circle the wagons and draw in the ranks and just deal with an attorney,” he said, “or they can do as we did.”

“That has really affected laboratory safety around the country,” Casadonte noted.

Because of that transparency, Texas Tech became the only university to be investigated by the national Chemical Safety and Hazard Investigation Board.

“When that incident occurred, a great deal of attention was focused on responding to the Chemical Safety and Hazard Investigation Board,” Schovanec said during Monday's award ceremony. “Beyond preparing the response to the board, you started to see more attention paid to effecting a cultural change at Texas Tech. This is what serious research schools should do, and I'm proud to recognize the Department of Chemistry & Biochemistry.”

Changes came swiftly. In 2011, Texas Tech formed the Institutional Laboratory Safety Committee to advise and develop policies and protocols for high-risk chemicals, and chemistry professor Dimitri Pappas became its chair. Following recommendations from the Chemical Safety and Hazard Investigation Board, the university updated its chemical hygiene plan – then, it went above and beyond, creating seven self-imposed recommendations following an internal investigation.

Throughout the Department of Chemistry & Biochemistry, training became key. Casadonte's successor as department chair, Carol Korzeniewski, created a departmental chemical safety officer position. After two years in that capacity, current safety officer Jerry Franco has completed more than 800 safety inspections in the department – as Casadonte points out, that's more than one per day.

The department also worked to present training sessions more effectively. Partnering with the J.T. & Margaret Talkington College of Visual & Performing Arts' School of Theatre & Dance, the chemistry and biochemistry faculty developed a series of 16 real-life emergency situations researchers might face in the labs. Their collaborators then scripted and staged the scenarios, acting them out in a laboratory, live, before a group of chemistry and biochemistry graduate students. At the exact moment when a researcher would need to make a pivotal decision about how to handle the scenario, the actors froze. The graduate students worked together in groups to determine the best course of action. Then, with a plan agreed upon, one student was inserted into the scene to enact the plan.

Casadonte recalls that, not long after one of these training sessions, the exercise proved most helpful. The scenario involved someone having a seizure in the lab. The graduate student chosen to finish the scene said afterward, “It was just like I was there.”

Two weeks later, a student in her laboratory actually had a seizure. She handled it appropriately and everything turned out well. Afterward, when the other graduate students asked her if she'd been nervous or uncertain in that moment, she said, “No, I had been through this scenario before, and it was just like we rehearsed it.”

These kinds of innovative efforts are one of the many reasons the Department of Chemistry & Biochemistry won this year's Presidential Departmental Excellence in Safety Award.

“When we were looking at the application for chemistry, it was not just where we came from and where we're going, but also that this department, in the entire committee's opinion, has been a leader on campus and outside of our campus, in our publications and in our presentations at conferences, about safety culture and making the change for the better,” said Pappas, chair of the award selection committee.

“When we sat down to select the award, even though it was a really tough field, Chemistry & Biochemistry rose to the top immediately. It's about steps that have been made hand-in-hand with the administration. It's been a really long journey, but I think one that's been successful and will continue to be so.”

However, Chemistry & Biochemistry didn't win just for its legacy of the past 11 years. A significant part of the selection committee's choice was due to the department's proposed use of the $25,000 the award carries with it.

Among those is creating a more modern and relevant laboratory safety video than the one now used, which was created by the American Chemical Society in 1988. Another goal is to create vignette videos on various laboratory procedures so that when new graduate students come in, they can get a better sense of how things should be done.

“We're going to try to do some innovative things with the money,” Casadonte said.