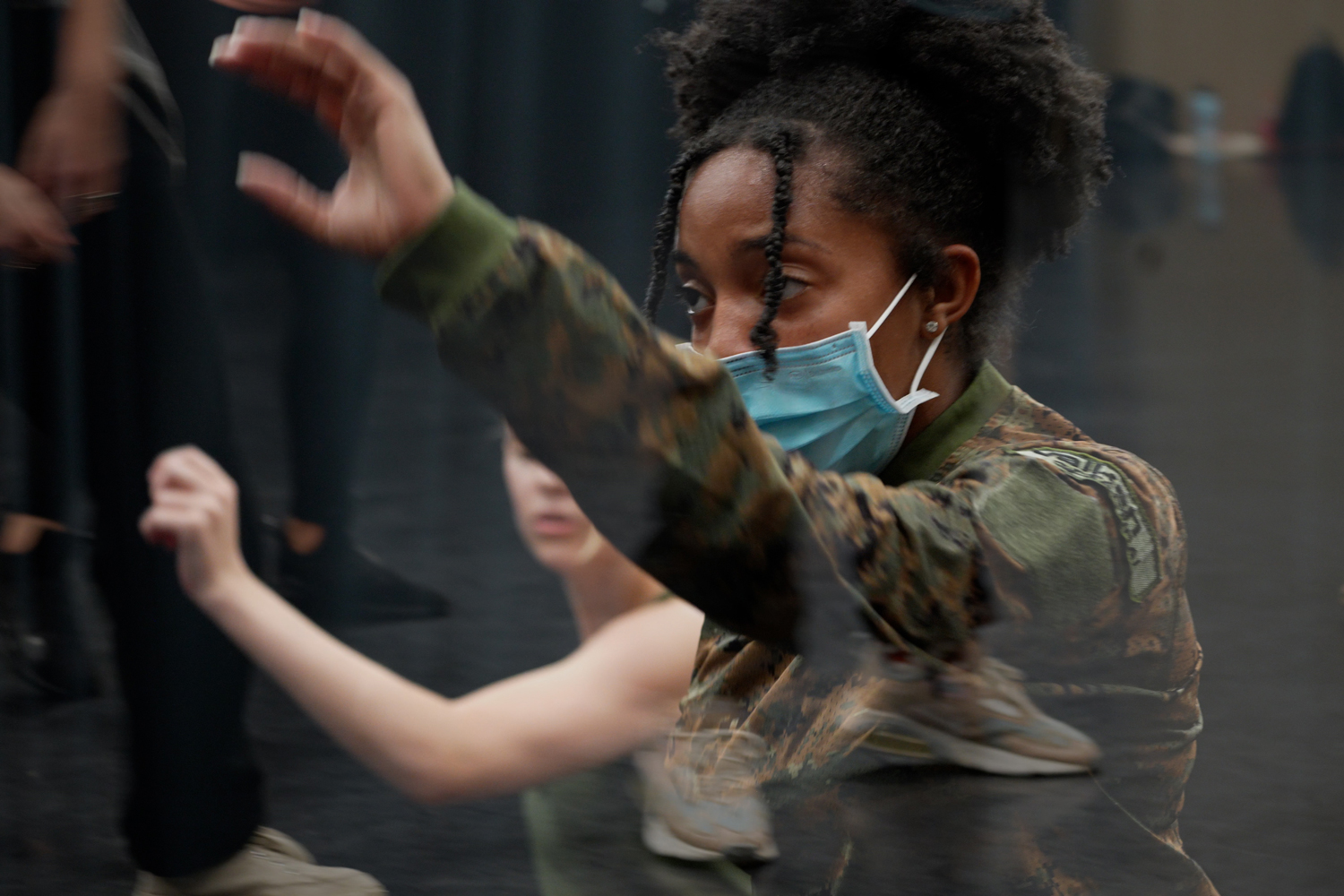 On an evening in late August, 12 students gathered in the Creative Movement Studio (CMS) on campus. Spread out in slinky-like forms to stretch hamstrings and hips, their eyes were drawn to the corner of the room where Anthony “YNOT” Denaro was cranking up a fusion of jazz and hip-hop music for rehearsal.

This was the first day of Denaro's guest residency with Texas Tech's School of Theatre & Dance, housed in the J.T. & Margaret Talking College of Visual & Performing Arts (TCVPA).

Denaro was the first guest artist on the schedule for the 2021-22 academic year, but he will not be the last.

“Bringing in a roster of guest artists across all disciplines in TCVPA provides our students with critical opportunities to interact with working professionals in their selected fields,” said Genevieve Durham DeCesaro, interim dean of the college.

“Guest artists not only help to infuse programs and curricula with diverse approaches, perspectives and experiences, they also reinforce the exceptional education our students receive from the faculty within our college.”

The 12 dancers rehearsing with YNOT were hand-selected through audition. Students from many programs lined up for the opportunity to work with the popular B-boy.

“Make sure to move your arms,” Denaro calls out over the music. “Don't stiffen your arms at your side like that – this isn't the Riverdance.”

While assertive, Denaro has a relaxed and humorous approach to teaching.

Unlike classes where students line up or stand alongside a barre, Denaro teaches in circles. He also approaches life that way. Denaro thinks in terms of circles, not only as an artist but as a community member.

Denaro's residency supported the existing focus the college has placed on diversity, equity and inclusion work with artists, content, and forms.

Denaro explores the design, sustainability, history and community of hip-hop. Through a futuristic lens, his work manifests in dance, typography, music and architecture. While he has made a name for himself in the international dance community, his drive didn't stop there.

“When you excel in one thing, it's easy to feel pigeonholed,” Denaro said. “Growing up, you hear a lot of ‘You can't do it all, so pick one thing.' I didn't really buy into that. I think you can do many things; you just can't do them all at once. I move in increments. There are times where I focus on dance and other times where I need a shift in focus to avoid burnout, so I work on music production or design.”

Denaro's wide array of expertise was on display during his time at Texas Tech.

In addition to the original piece he choreographed, Denaro spent most of his time visiting classes in the School of Theatre & Dance. From sound design to contemporary dance to an open class he taught in the Student Union Building (SUB), Denaro spoke on as many artistic media to as many students as he could.

“Music was my first passion,” Denaro said. “I was raised in New Jersey by a mother who brought me up on Led Zeppelin, Prince and John Coltrane. As a teenager, I started playing music, which gave me a foundation for theory and rhythm. All of this led to movement. As I would play music, my body wanted to move.”

Denaro watched a lot of breakdancing during the early 1980s and became hooked. Although his family lived in New Jersey, they were originally from the Bronx. So, after Denaro finished school, he made a pilgrimage of sorts and moved to the New York City borough.

In the Bronx, Denaro met Wayne “Frosty Freeze” Frost, a hip-hop legend who quickly took Denaro under his wing.

“I found my community,” Denaro said of his time in New York. “Being in the Bronx exposed me to the four elements of hip-hop in a personal way. You got to see breaking, turntablism, rapping and graffiti.”

For some, hip-hop is a dance class to try. To others, it's a way of life.

It certainly became Denaro's whole life. While earning his terminal degree in dance he also traveled the world for three years attending competitions on almost every continent. After winning competitions, he started judging them.

However, Denaro now has a new focus.

“I put my energy into education rather than competition,” Denaro said.

“I am now working mainly in universities,” Denaro said. “I want students to understand that our value system is not always about an A, B or C grade, but how you let your experiences shape you as an artist.”

“YNOT brought his unique experience and firsthand knowledge of working with icons of the hip-hop community to his Texas Tech residency,” said Kyla Olson, interim head of dance in the School of Theatre & Dance.

“YNOT grew up in the hip-hop community and shared what makes that dance style different from other forms. Hip-hop is about community and experiencing the dance styles by watching and dancing with others. It's not a codified form like ballet, so I appreciated his approach of teaching in a circle.”

Denaro's emphasis on community couldn't have been timelier. His residency was the fruit of larger conversations happening within the College of Visual & Performing Arts.

“It is important for our college to bring in guest artists who are not represented within our current faculty,” Olson said. “We want to provide students with new opportunities. When we received the call to action in the summer of 2020 to address diversity, equity and inclusion issues, we took that seriously.”

As part of that work, Tanya Calamoneri, assistant professor of dance, applied to bring in YNOT.

“Our bachelor of fine arts program is focused on contemporary dance,” Calamoneri said. “Hip-hop and breaking are in fact, contemporary dances. Dance in higher education has been slow to recognize that, choosing instead to focus on Western concert dance. We are part of the trend to change that.”

Denaro looks forward to the day when universities put equal emphasis on all dance forms.

“Higher education is heavy on modern and ballet, but this is changing,” Denaro said. “I feel very privileged to be part of these early conversations.”

Diversity, equity and inclusion work can't stop with the student experience; it also must be reflected in the types of art, curriculum and cannon that are taught. This work starts with exposing students to different forms of art and different kinds of artists.

“I was interested in auditioning for this experience because I've never been exposed to breakdancing,” said Annmarie Walling, a first-year student pursuing her bachelor of fine arts degree. “I've danced my whole life but have focused on contemporary dance. I was excited to be exposed to a totally new kind of art.”

“Working with YNOT was incredible,” said Jadyn Owens, a sophomore minoring in dance. “I was surprised by how quickly he got us breakdancing. We ended up doing some crazy floor work that was really fun. I'm glad I pushed myself to try something new.”

Denaro hopes these students will push themselves continuously, and not just in terms of breaking.

“One thing I've noticed from traveling to universities is the untapped potential for collaboration among students,” Denaro said. “Oftentimes, we don't see the benefit of collaboration until well after college – after those annoying group projects.”

“However, when again in life will you be surrounded by so many brilliant people representing so many different disciplines? Students walk by other buildings every day on their way to class. What if one day they stuck their head into a music class or an architecture class and said, ‘Hey, I'm a dancer. How could we collaborate?”

At the end of the week-long residency, students were working with one another and understanding the idea of dancing in circles, building off what their peers were doing.

Yvonne Racz-Key, artistic director for Ballet Lubbock, made note of Denaro's presence and contribution to the School of Theatre & Dance.

“It is paramount to have diversity in a faculty, so you have representation” Racz-Key said. “That includes race, gender and training. This diversity needs to be daily as well as through guest teachers. I applaud Texas Tech for bringing in YNOT.”

As TCVPA prepares for other guest artists this year, they may not all teach in circles, but they will expand the larger circle the college is creating through its dedication to diversity and excellence.