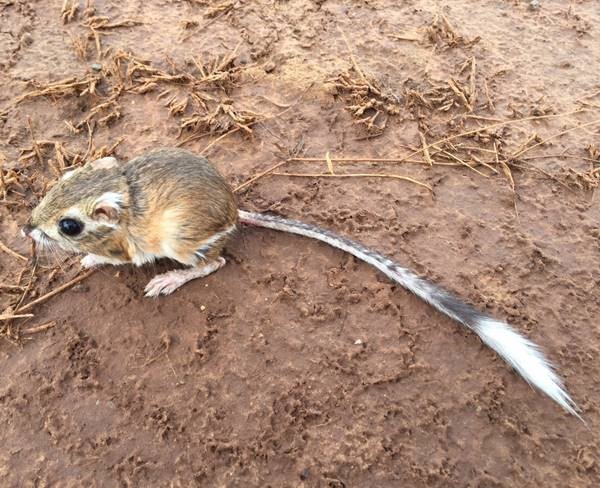 Clint Boal received the award from the U.S. Department of the Interior and the Texas Parks & Wildlife Department.

An ecosystem can encompass hundreds, if not thousands, of different species, from plant life to the animals that inhabit it.

All these different species work to get what they can out of the ecosystem, taking nutrients from the ground and larger organisms feeding on some of the smaller ones. But, somehow, most, if not all, the species manage to survive, and some even thrive.

But the alteration and eradication of rangeland over time has made survival difficult for some species, so some land on the Texas Parks & Wildlife Department's (TPWD) threatened list. One of those is the Texas Kangaroo Rat.

Not much is known about the habitat use of the Texas Kangaroo Rat, and what is known is associated primarily with burrowing sites, with little data on foraging areas and home range conditions. Even the method of dispersal of the rat into new areas has yet to be determined. A researcher at Texas Tech University is hoping to change that.

Clint Boal, a professor in the Department of Natural Resources Management (NRM), recently received a $277,982 grant from the U.S. Department of the Interior's Fish and Wildlife Service and the TPWD to study the connectivity and management of, and develop monitoring strategies for, the Texas Kangaroo Rat.

“This is an opportunity for us to work directly with landowners and learn to manage private lands to further conservation efforts for the Texas Kangaroo Rat in ways that are compatible with livestock production and good rangeland management,” Boal said.

The project is a collaborative effort with associate professor Carlos Villalobos and Richard Stevens, the President's Excellence in Research Professor in NRM. Stevens earned a grant from the Texas Comptroller of Public Accounts to study the spatial ecology of the Texas Kangaroo Rat.

The goal of Boal's project is to determine how best to survey and monitor Texas Kangaroo Rats and develop a fine-scale understanding of their habitat use, home range size and pattern of dispersal. The hope is to establish best practices for private landowners so their rangeland can serve as a Texas Kangaroo Rat habitat while supporting livestock production.

Rats will be assessed for their movement and habitat use on private lands and state park/wildlife management areas in several counties surrounding Wichita Falls. Surveys will be conducted to determine where the rats are most abundant during the week of the new moon when the kangaroo rat is most active. Once the different detection methods have been evaluated for time, cost efficiency and maximum detection, those methods will be applied to the Texas Kangaroo Rat.

Researchers will then use GPS data-transmitting collars to determine the different dispersal behaviors. Most species occupy a new area through the dispersal of their juveniles, but this has not been confirmed as the method of dispersal for the Texas Kangaroo Rat. These collars will allow researchers to collect fine-scale habitat information for up to two months. Once enough data has been collected, researchers will evaluate the occupied locations to determine such factors as soil type and condition and vegetation composition in order to conduct future research.

Researchers will then engage in experimental manipulation of vegetation in unoccupied areas to establish a Texas Kangaroo Rat habitat that is in proximity to existing rat clusters to urge the species to expand into and occupy new territory. Some rangeland will undergo controlled grazing while other rangeland will undergo prescribed fire followed by grazing.

This will determine whether rangeland managers can expand habitat use in a way that is beneficial both to the rat and to other species on the land, specifically cattle.