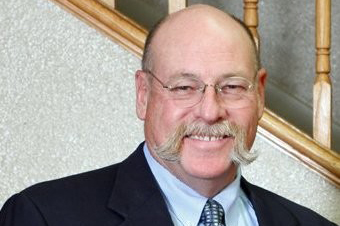 To mark Raider Red's 50th anniversary, a few former Raider Reds spoke about their experience as the notable mascot and what they're up to now. This the first in a five-part series.

W. Calloway Huffaker is a Tahoka-raised Texan who graduated from Texas Tech in 1983 with a degree in mechanized agriculture. He served as Raider Red from the end of the spring semester in 1983 until the end of the fall semester 1983.

Huffaker currently practices law through Huffaker & Harris PLLC in order to continue his love of farming and raising cattle.

These are Huffaker's fondest memories of representing Texas Tech as Raider Red.

I wanted to be Raider Red since pledging with the Saddle Tramps because, as a pledge, I was required to help with the program a lot and enjoyed it. I was turned down twice for Raider Red because I was too big for the costume. My last semester, I ran for first vice president of Saddle Tramps – who picked Raider Red – and told the Tramps if they elected me to the job I was appointing myself as Raider Red and I would be responsible for rebuilding the costume.

I was elected, and myself and former agriculture professor James Graves' wife, Lindl, built a new costume, and I raised money for a new head and guns. A local costume shop built the head, and I had a friend who worked with fiberglass make the guns. I had a set of real guns made for blanks, but the school would not let me use them. My boots were donated by a Western Wear shop in town.

My time as Raider Red was one the most memorable times of my college career. I had so much fun.

I attended a lot of activities such as parades, community gatherings and birthday parties for a donation, to raise money for the costume and Raider Red travel expenses. One birthday party I was invited to, was for a little girl who was about 8 years old. She was a big Texas Tech fan, and when I walked into the party in her parents' backyard, she broke down in tears. I scared her to death, so I was not the hit of the party her parents envisioned. I felt so bad for her, but now she is grown and tells me how much she enjoyed it.

The only thing I'll ever be remembered for is that I once was Raider Red.

The identity of Raider Red is secret until you complete your tenure. But the experience will always stay with me; it taught me to think outside my comfort zone and be bold.

The craziest thing that happened while I was Raider Red happened at the Air Force game in Colorado Springs, Colorado. At halftime, I had gone into the tunnel to cool off and had taken the head off. I was standing with two Saddle Tramp pledges for a few minutes. All of a sudden, I hear a loud yell from behind me. Myself and Raider Red's head were swept away; the Air Force cadets carried the head and me onto the center of the field, passed Raider Red's head to the Air Force cadets in the stands, and the head went to the top of the stands.

The Saddle Tramps started pouring out of the stands, and the police and others stopped the fight from ensuing. A cheerleader for Texas Tech, who also was a Saddle Tramp, was escorted to the top of the Air Force stands and retrieved the head unharmed. When he handed me the head, he just grinned and said, ‘Don't say anything.' Inside the head was a cadet's silver-barred hat, which was conveniently absconded. The front page of the Sunday Denver Post edition had a photo of Raider Red's head being held on top of the stadium by the Air Force cadets the next day. Looking back, it was very memorable, but all I remember is how embarrassed I was and how much trouble the pledges had to suffer for letting it happen.

What advice do you have for future Raider Reds?

The best advice I could give anyone serving as Raider Red is to enjoy the time and be a great ambassador for Texas Tech.

Raider Red is a symbol of our university and, as such, should stay as true to the original caricature of the Dirk West drawing as possible. Raider Red is known more for representing Texas Tech now than the Masked Rider. Our school tradition of Raider Red and the concept of an old cowboy with his six-shooters is something to be protected and cherished for generations to come. This is the root of Texas Tech's, ‘Get your guns up.'