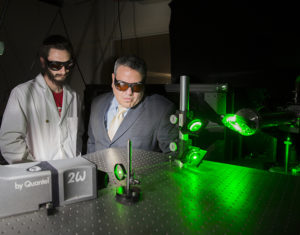 With the flick of a switch, a once dark room is illuminated thanks to your every day, fluorescent lightbulb.

“A plasma is defined as a partially ionized gas and a commonly seen example is a fluorescent lightbulb, which is created when electricity is passed through Mercury vapor,” said Kevin Finch, a doctoral candidate in the Department of Chemistry and Biochemistry through the College of Arts & Sciences at Texas Tech University. "The electricity is able to break down the mercury gas, creating a plasma which emits a nice, broad white light that we're all familiar with.”

Finch knows a thing or two when it comes to plasmas. His research focuses on the fundamental studies of various plasmas used for chemical analysis.

“Plasmas are actually used very commonly in chemistry and other fields to perform chemical analysis,” Finch said. “Plasmas have relatively high energy and are very capable of exciting/ionizing a variety of other elements on the periodic table. The excited/ionized elements then emit a characteristic wavelength of light which can be used for subsequent analysis.

“Although plasmas are often used for chemical analysis, there is much left to be understood in terms of how the operating conditions – pressure, voltage, current, etc. – and the actually plasma source geometry effects the underlying chemical mechanisms.”

The goal of Finch's research is to figure out how the energy transfer mechanisms within plasmas used for chemical analysis change based on varying operating parameters.

“I'm trying to understand those underlying chemical mechanisms in the plasma,” Finch said, “I'm basically trying to correlate their changes to a variety of commonly implemented operating conditions. This will allow me to then pick, let's say, the optimum conditions for analyzing copper using a plasma, which is going to be very different than the optimum conditions for creating a broad white spectrum fluorescent lightbulb, as an example. We want to be able to tailor the geometry and the modality of the individual plasma to whatever the specific application is.

“So, all of my research is very fundamentally based, discovering how varying operating conditions change the underlying species distributions, which in turn can change the governing mechanisms. To accomplish this, I use a very specific technique called laser scattering to actually analyze the fundamental species present within plasmas.”

According to Finch, laser scattering provides information about the gas atoms, free electrons and molecules present inside the plasmas. The scattering information is very specific to the distributions of kinetic energy these species carry, as well as their number density, which is basically the amount of them present in a certain volume.

“Analytical chemistry is where we take a sample, derive its composition and measure the amounts of each of the components making up that sample as a total,” Finch said. “This fellowship allows me to do full-time research for three months. I don't have to teach; I can strictly just focus on research. This is offered to a very select group of individuals. It's a very competitive, nationwide fellowship.”

Gerardo Gamez, an assistant professor of analytical chemistry, is Finch's adviser for the fellowship.

“Kevin is the best graduate student I have ever had,” Gamez said. “He has authored and co-authored many research presentations and has co-authored several publications. He is an exceptional student with a superb work ethic who constantly goes above and beyond his duties. I have no doubt Kevin will excel in any venture he takes on and will become a leader in the analytical chemistry field.”

When Finch completes his current research, he would like it to benefit the field of plasma-based chemical analysis spectroscopy.

“The current approach for optimizing your plasma operating conditions for the specific analysis that you want to perform is trial and error,” Finch said. “We basically build these plasmas and try to do the best we can to optimize them for a specific application to give us good, what we call, analytical figures of merit. The problem with this is it takes a lot of time because you're effectively playing around with the operating conditions until you obtain the best figures of merit, but this may only be a local optimization and not the absolute best conditions possible, which we call a global optimization.

“So, I would love to minimize the use of trial-and-error approaches for plasma chemical analysis by the end of my doctoral program. Basically, people will say, ‘I want to utilize a plasma for a specific chemical analysis application,' and they can look up all the fundamental studies that we've done, and they can pick the best parameters, initially, before needing to perform the trial and error.”

Finch also hopes to stick with spectroscopy upon earning his doctoral degree.

“My interest lies in the industrial side rather than the academic side,” Finch said. “But, I would love to do something with instrumentation development in the field of spectroscopy. I have custom-designed and built a new instrument, called a triple grating spectrograph, to measure very low light level signals. I characterized and built it myself. It has the lowest limits of detection for chemical analysis plasmas – in terms of the electron number density – out of any instrument in the world to date. I would love to continue doing that side of instrumentation development because that's really where my skill set and passion lie.”

“I would love to send a small shout-out to my adviser, Dr. Gamez,” Finch said. “He's always been there whenever I need guidance and has been continually supportive throughout the project. I think you're very lucky if you have a supervisor who's able to effectively communicate ideas and really cares about their employees/people they're mentoring. Dr. Gamez is probably the best adviser or boss of any job I've ever had in my career. I'm very lucky to be in that environment.”