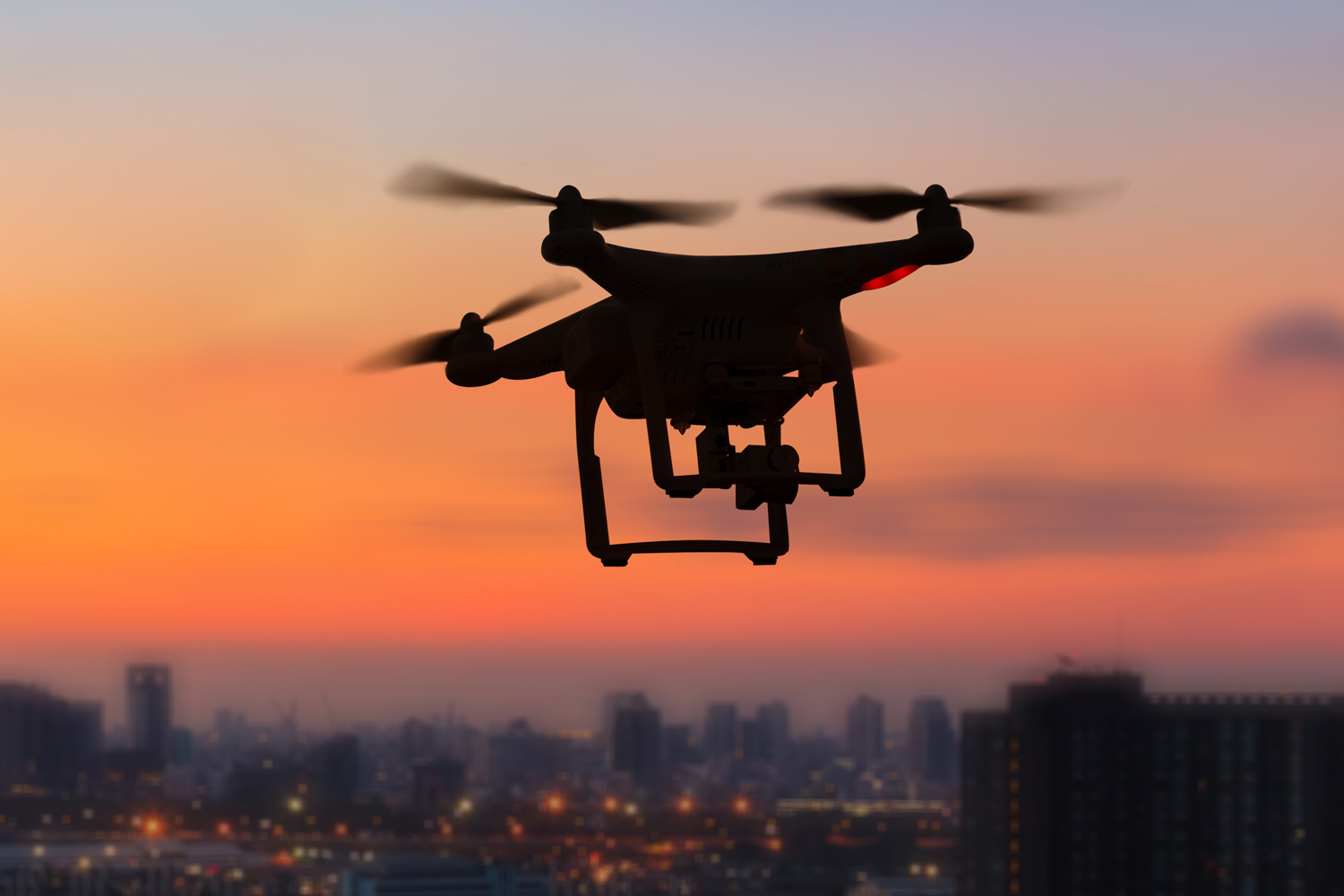 Last month, NATO's Science for Peace and Security (SPS) Programme held the first in a series of workshops about vulnerabilities in the drone age – one of the major agenda items of the 2021 NATO Summit in Brussels.

The first session of the workshop focused on the threat of government-led drone surveillance, while the second session, led by Kerry Chávez, a doctoral candidate in Texas Tech University's Department of Political Science, and Ori Swed, director of the Peace, War & Social Conflict Laboratory in the Department of Sociology, Anthropology and Social Work, explored the proliferation of malicious drone use among violent nonstate actors (VNSAs) and terrorist organizations.

While VNSAs employ unmanned aerial vehicles (UAVs) of all sizes, civilian drones – “like the ones you can buy at Target,” Swed said – are unrivalled in their low cost and accessibility. The commercial drone industry is innovating rapidly and lowering consumers' – and terrorists' – barrier to entry into the aerial sphere.

“We decided to look at this phenomenon because we saw what few experts and practitioners already saw,” Swed said. “We had terrorist organizations and violent nonstate actors that, up to that point, had been using more conventional kinds of technology and tools. Suddenly, they were able to tap into air capabilities, which is enormous in the field of conflict and security.”

Terrorist groups acquire drones through a variety of different means, including purchasing from online retailers, scavenging and reverse-engineering downed military devices and building from scratch with the assistance of YouTube tutorials.

“The drones that wreaked havoc in Saudi Arabia were handmade in Houthi workshops in the mountains,” Swed said. “You have very sophisticated drones created in workshops in caves, in the mountains, by Houthi rebels. They send them flying hundreds of miles and hitting right on the spot – oil facilities and airports in Saudi Arabia – disrupting oil and disrupting air traffic. It's like a guided missile.”

Cave workshops might sound primitive, but they enable terrorists to produce relatively sophisticated drones that pose major defensive challenges to powerful state actors vying for tactical superiority in the airspace. Hezbollah, Hamas and the Houthi rebels – VNSAs that developed their drone technology with the help of Iran – are increasingly self-sufficient in that they no longer have to rely exclusively on Iranian shipments to supply their drones, and Iran can bypass the inconvenience and danger of a handoff.

“Iran figured out it's easier and smarter for them, instead of delivering drones to their proxies, to deliver the knowledge,” Swed said.

“We looked at how groups are attaining and adopting drone technologies, and we found a lot of it is through their social networks,” Chávez said. “This knowledge is diffusing through groups when they interface, either as allies or enemies.”

While the highest concentration of VNSA drone proliferation is in the Middle East, drone use is not restricted to active war zones; it occurs on every continent except Antarctica.

According to Chávez's and Swed's article, “Off the Shelf: The Violent Nonstate Actor Drone Threat,” published in the U.S. Air Force's Air & Space Power Journal, “The aerial threat is not limited to nations contending with war, insurgency or low-intensity conflict. It presents a formidable national security problem, especially for nations normalized to civilian drones in the airspace like the U.S.”

In addition to using drones for smuggling, propaganda and surveillance, terrorist groups use “suicide drones” to assassinate government leaders, as seen in the January 2019 attack on a military parade that killed at least six people, including Yemen's chief of military intelligence, and the 2018 attempted assassination of Venezuelan President Nicolás Maduro.

“The U.S. CIA facility in Iraq was hit by a drone operated by one of the armed groups in the region,” Swed said, referring to a drone attack on a CIA hangar in April. “It's really hard to detect them because they're so small; it's hard to disrupt them unless you have an effective counter-drone network.”

Even Israel's Iron Dome, a sophisticated defense system designed to intercept and detonate incoming aerial weapons, is ill-equipped to defend against terrorist-operated civilian drones due to their diminutive size and similarity to stealth aircraft.

The premise behind NATO's first SPS workshop “was to introduce the problem, because right now we are at the stage of trying to understand that there is a problem,” Swed said.

“A lot of our work has been oriented toward drawing attention to this in the first place, because it is somewhat neglected by researchers, so our initial publications have been demonstrating both theoretically and empirically that this is important for international security,” Chávez said. “NATO has come to recognize that this is happening, it has a significant impact and it's very important. Now, how do we learn more about it in order to develop wise and prudent policy prescriptions?”

Now that Chávez, Swed and other experts in the field have presented research demonstrating the magnitude of the nonstate drone threat, NATO's next SPS workshop will focus on counter-drone technology.

In their article, “An Allegory of the Cave: Innovation and Terrorist Drones,” published in WAR ROOM, the online journal of the U.S. Army War College, Chávez and Swed warn that “It is neither proportionate nor sustainable to employ traditional airpower or weaponry...against rebel-operated commercial drones,” predicting, “It will likely be boots on the ground, not airmen, who will bear the brunt of defense against terrorist drones.”

But how can boots on the ground compete with such a formidable aerial threat?

Currently, counter-drone technology includes the DroneGun Tactical, a jamming device that sends drones back to their controllers, but which is ineffective against GPS-guided devices; the DroneCatcher, which traps drones in a net and brings them safely to the ground; and even hawks and eagles trained to intercept mid-flight drones and deposit them in remote areas. However, these measures alone are insufficient to counter the threat, which Chávez and Swed predict will keep pace with the rapidly advancing civilian drone market.

“With the proliferation of accessible technology, it's just a question of time until we'll have more advanced drones at the hands of militant groups and hate groups,” Swed said.

For governments, Chávez and Swed recommend stricter regulation on the sale of commercial drones to disrupt terrorist supply chains and restrict VNSA access; for the private sector, they encourage greater innovation in counter-drone technology to expand the variety of defensive options; and for military and law enforcement, they promote more robust and consistent counter-drone training.

A partnership borne from mutual interests

Chávez and Swed first met at a conference hosted by Texas Tech's Institute for Peace & Conflict, where they discovered a shared interest in contemporary conflict and the social sciences, as well as similar backgrounds in intelligence, international security and counterterrorism.

Before moving to Texas, Chávez served as a terrorism liaison officer with the Los Angeles Joint Regional Intelligence Center while working in law enforcement and worked for the U.S. Department of Defense in International Security Affairs, Middle East policy.

Swed has 12 years of experience in intelligence and security, having served as a special forces operative and reserve captain in the Israeli Defense Forces and worked as a security contractor in the private sector.

“We chose this field of study because it's one of the key places where our research approaches and interests converge,” Chávez said. “We're doing this not only because it's important and meaningful from a national security standpoint, but also because this is what we do and what we're good at. Partnerships are borne from mutual interests.”

Now, Chávez's and Swed's catalog of VNSAs using drones is believed to be the most comprehensive in existence.

“It's an unfolding and emerging topic that we are privileged and honored to be part of,” Chávez said.

“Texas Tech has amazing research going on, and this is one example,” Swed added. “This is where social science meets policy, where cutting-edge research addresses meaningful issues. When you can translate academia into policy that positively impacts cities, institutions and governments, that's the best outcome of research in the social sciences.”

Institute for Peace and Conflict

The mission of the Institute for Peace and Conflict at Texas Tech University is to enhance and expand critical research, creative scholarship, and classroom teaching in the fields of war and society, global peacemaking, conflict resolution, and society's response to such efforts. IPAC will host conferences and events, support graduate student research, and promote international cooperation and collaboration with students, faculty, and other organizations who share our vision and mission to better understand these important events and issues. Please be sure to check our events page for information about upcoming conferences and other activities.