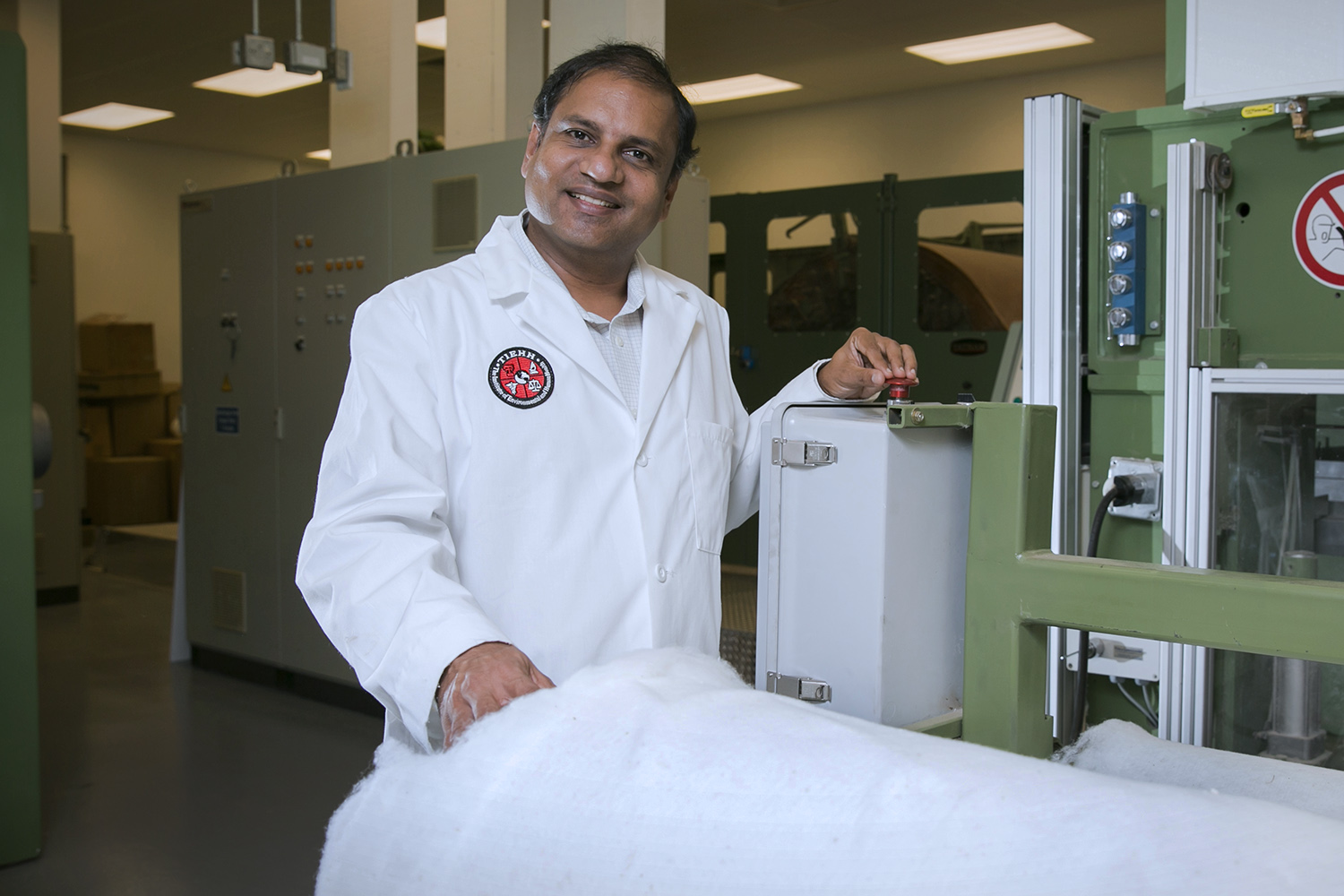 Seshadri Ramkumar has played a vital role in the industry’s growth over two-plus decades.

As COVID-19 surged through the U.S. last spring and summer, the country found itself facing an alarming shortage of the personal protective equipment (PPE) frontline health care workers desperately needed to battle the pandemic.

This year, on the other side of the globe, India is embroiled in the same struggle, except for one key thing. Until mid-2020, the U.S. relied on China to produce most of the PPE it used. In contrast, India is self-reliant – it can produce its own PPE because of its widespread support for and adoption of the technical textiles industry. Technical textiles such as nonwoven fabrics are important components of face masks, medical gowns and PPE.

It wasn't always this way, but the work of one Texas Tech University professor over the last two-plus decades has played a vital role in preparing India for the very fight it's in now.

After completing his doctorate in materials, textiles and fiber science in 1998, Seshadri Ramkumar joined Texas Tech. In 1999, with a major investment from the U.S. Department of Defense, he began researching nonwoven materials for defensive applications, such as chemical and environmental decontamination.

The Indian government had begun its own work in the nonwovens sector, but it was nascent. To help the field grow, Ramkumar – now a professor of advanced materials – has partnered with the Indian government and technical textiles organizations around the world to host conferences in India since the early 2000s.

The “International Conferences on Advances in Fibrous Materials, Nonwoven and Technical Textiles” were organized with several institutes in India in collaboration with The Institute of Environmental & Human Health (TIEHH) at Texas Tech since 2004. The events have been sponsored by notable industry groups including the American Association of Textile Chemists and Colorists (AATCC), the Association of the Nonwoven Fabrics Industry (INDA), the Technical Association of the Pulp and Paper Industry (TAPPI) and the Industrial Fabrics Association International (IFAI).

“If you go back 20 years, the nonwoven industry really did not exist the way it is today,” explained Kanti A. Jasani, president and owner of Pennsylvania-based Performance & Technical Textile Consulting, who attended the 2006 conference as an AATCC representative. “Some products were being made, but not in the manner, scale or quality in which they are being made today – and that's because of Dr. Ramkumar's contribution, working with the major industry partners in India. Every year, he is in India during the summer, lecturing, holding seminars, visiting mills and helping companies.”

INDA hosted its first business conference in India, “Link with India,” in October 2007 to introduce the emerging textiles and nonwovens industry to a wider audience.

“Dr. Seshadri Ramkumar served as tutor for the first nonwovens training course in Mumbai in January 2007 and was instrumental in assisting INDA with these efforts,” said Lori Reynolds, director of events and administration for INDA.

In 2008, Ramkumar published a report on India's technical textiles sector, “India Rising: Opportunities in Nonwovens and Technical Textiles,” which estimated its growth through 2050. So far, he's been right. In 2006, India produced about 30,000 metric tons of nonwoven fabrics. In 2019, it produced 536,000 metric tons.

Professor A. Venkatachalam, former department chair at PSG College of Technology and former dean of textile technology at the Bannari Amman Institute of Technology, explains that the conferences and collaborations Dr. Ramkumar initiated across India with many entities and government bodies have given India significant expertise in nonwovens – and that has well positioned the country to deal with the COVID-19 pandemic.

“India's textile sector – particularly strong spinning and considerable knitting, weaving, apparel fashioning, chemical processing, textile machinery manufacturing, raw material and cost-effective operatives – has been recognized markedly in the world textile map for a long time,” Venkatachalam said. “Dedicated schemes by the Ministry of Textiles for research and development, training and investment, and enterprising business communities have led to flourishing technical textiles, specifically in the nonwoven sector. The development of quality products at an international standard has prompted India to gear up during COVID-19 times to come up with PPE products.”

Ramkumar, the inventor of the FiberTectTM decontamination wipe, has played an especially integral role in India's development of the technical textiles sector.

“He is very active in teaching people and helping India's governmental bodies. They recognize him as an authority on this subject, and he is welcomed by the industry and the institutions across India with open arms.”

Looking back, Ramkumar thought he was just helping to grow an industry, but the tangible effects of his work have now gone far above and beyond what he anticipated.

“I never thought at the time that this would be a real impactful work, but it is now, because India is making its own PPE,” Ramkumar said. “This is a once-in-a-lifetime experience. To start something, and see it years later saving lives, it's very humbling.”