Honoring Those Who Have Sacrificed for Us 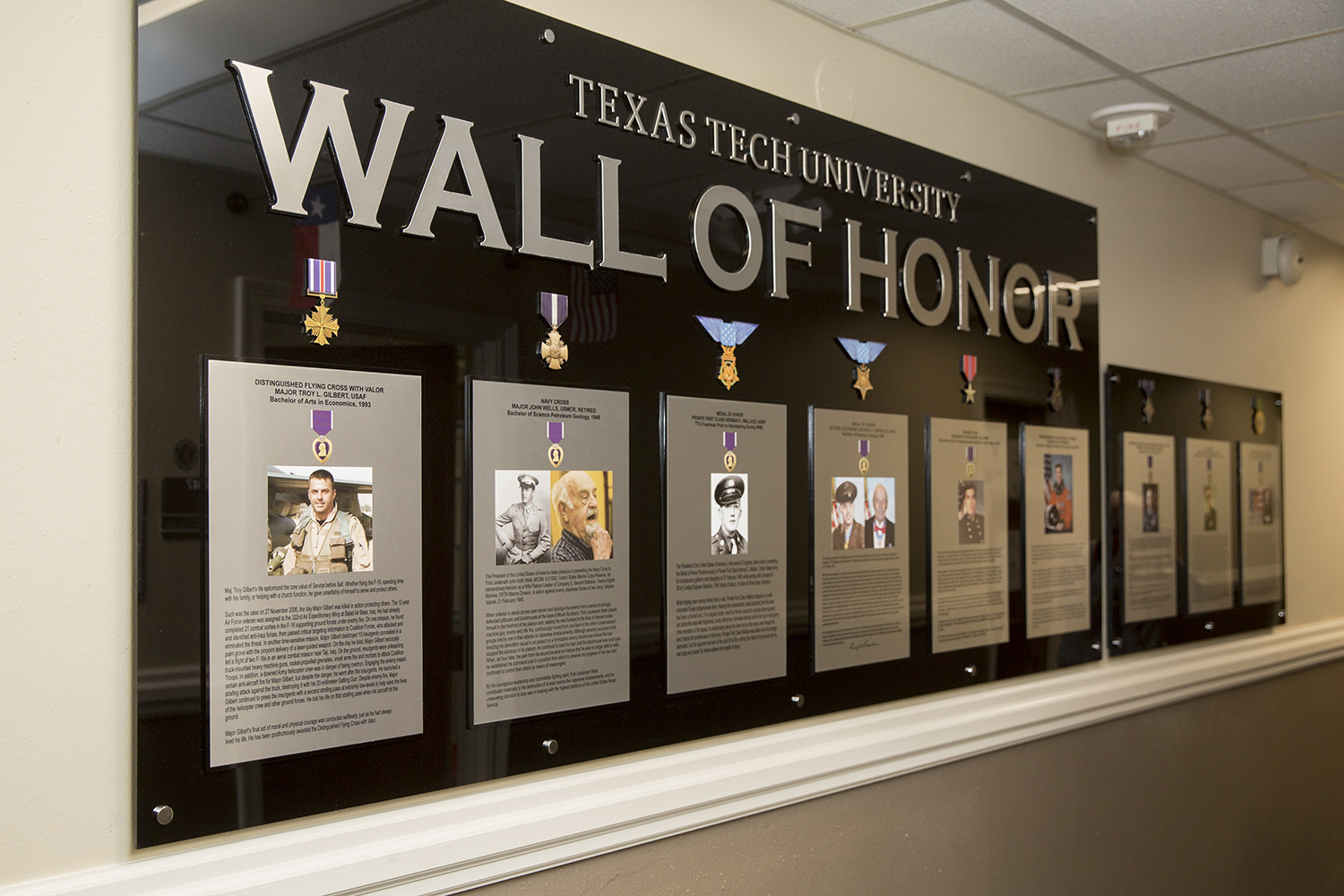 Texas Tech University’s Wall of Honor recognizes alumni who have either fallen in the line of duty or received the highest military honors.

“The cost of freedom is always high, but Americans have always paid it.” ~ John F. Kennedy

Remembering our military men and women who have sacrificed so much for us in the defense of freedom has been a U.S. tradition since May 5, 1886. What started as Decoration Day to honor the fallen soldiers of the Civil War grew into Memorial Day where we remember fallen U.S. soldiers of every war.

Memorial Day was declared a national holiday in 1971 and is observed on the last Monday in May. And while a day of remembering those who sacrificed their lives for us is important, it's imperative we keep these men and women in our thoughts throughout the year.

In 2018, Texas Tech University's Military & Veterans Programs (MVP) established its Wall of Honor in Drane Hall to remember former Red Raiders who have either died in combat or who received high military honors and died outside of battle.

“It's important for us to recognize these men and women who have given so much for our country because we don't want to forget them,” said Sierra Mello-Miles, director of MVP. “These soldiers have made incredible sacrifices – sacrifices most people will never understand. Many of these people joined voluntarily. They knew what was at stake, and they still went.”

This past Memorial Day, U.S. Marine Corps Capt. Joshua S. Meadows – a 2002 graduate of business administration – was inducted into the Wall of Honor.

On Sept. 5, 2009, while on a combat reconnaissance patrol in central Farah Province, Afghanistan, Marine Special Operations Team 8113 came under heavy enemy mortar. In the chaos of rocket-propelled grenade launches and automatic weapons fire, Meadows climbed out of his vehicle and cleared a compound in the northern section of the village before securing a vantage point on the roof.

Under a barrage of gunfire, Meadows sprung to action with complete disregard for his own safety. Compromising his position, he neutralized two enemy combatants and marked his position for supporting arms to locate the target. Meadows was mortally wounded when he fearlessly exposed himself to provide suppressive fire, enabling fellow Marines to forge ahead and destroy the well-fortified enemy.

By his extraordinary guidance, zealous initiative and total dedication to duty, Meadows reflected great credit upon himself and upheld the highest traditions of the Marine Corps and the U.S. Naval Service.

Meadows – who received a Bronze Star for his act of bravery – died two weeks before his daughter was born.

“He died trying to cover his battle buddies,” Mello-Miles said. “His incredible selflessness and courage should be honored and remembered. I'm a combat veteran. I served in Iraq, and we have a lot of combat veterans in the department who've lost people. It's near and dear to our hearts to honor those we've lost and to preserve their memories.”

Including Capt. Meadows, 10 service members are forever enshrined on the Wall of Honor: