Could the Mysteries Surrounding Agent Orange Finally be Answered? 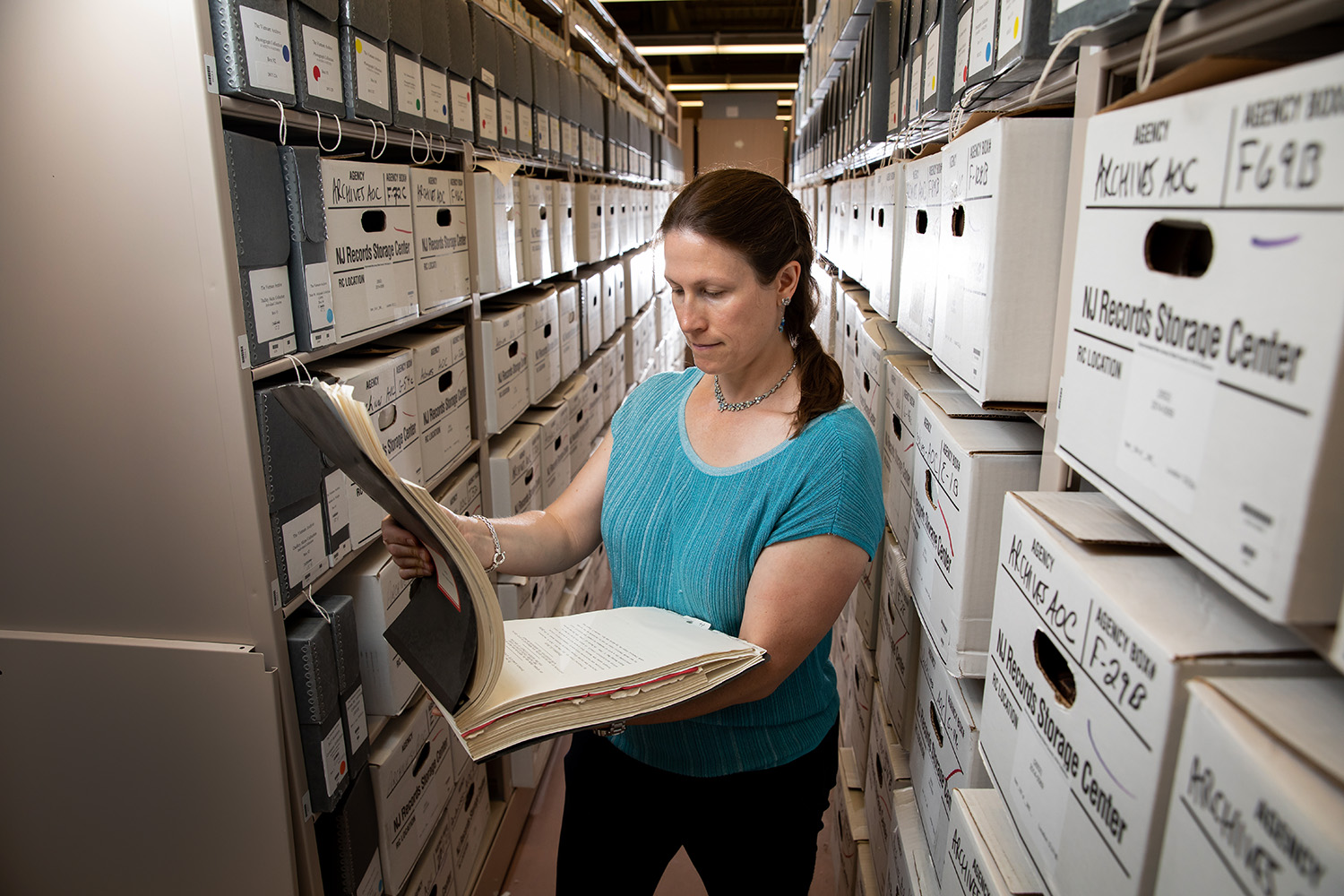 The Vietnam War is shrouded in mystery and misunderstanding.

To this day, many questions remain, with few answers, concerning one of the war's greatest controversies – Agent Orange.

Thanks to three Texas Tech University researchers, we may be closer to answering one of the war's most lingering questions:

Did the creators of Agent Orange know how poisonous it really was before using it in the Vietnam War?

Steve Maxner, director of the Vietnam Center & Sam Johnson Vietnam Archives (VNCA); Amy Mondt, associate director, and Andrew Hinton, head of collection development, applied for a National Endowment for the Humanities (NEH) grant in 2020. They recently discovered they received a grant, but not just any grant – they received the largest NEH grant in Texas this year.

Packed away in Lubbock, are 1,100 boxes worth of documents that never reached the courtroom during the famous 1980s class action case against the creators of Agent Orange. The NEH believes these papers could have endless implications across many disciplines, reinforced by its significant grant to Texas Tech.

“This is a highly unusual collection, and one that is noteworthy,” said an NEH panelist who reviewed the grant. “This collection will offer new and unique contributions to not only the field of military history, but also legal, medical, political, and environmental histories. In addition to academic fields, the release of these records could have an impact on future public health and military policies, as well as medical ethics.”

In the 1980s, several U.S. Vietnam veterans sued the U.S. chemical companies that produced the herbicide known as Agent Orange. The companies settled with the veterans out of court.

The question remains, however. What story do those papers tell and why were they not released in court?

“We applied for this grant so we can find out,” Mondt said. These papers have been in our archives now for seven years, but because of their magnitude and significance, we needed to hire additional archivists to process the information correctly.”

What is Agent Orange?

“The problem with Agent Orange is the dioxin exposure,” Maxner said. “It's not the defoliant itself that's poisonous, it's the dioxin, which was a byproduct when the chemical companies created Agent Orange.”

After the lawsuit in the 1980s, some of the companies named in it went out of business. One of these companies turned over its legal documents to its attorneys to do with as they saw fit.

“Our assumption is that these attorneys figured they would try to do some good,” Maxner said. “They were being civically responsible when they released these papers.”

The papers were given to a veteran's association in New Jersey, but in 2014 were sent to their new home – Texas Tech's VNCA. Now that the team has received grant money, they will begin the three-year process of discovering what truths these boxes hold.

Processing these papers will be a tedious and detailed task, but the researchers already have ideas of how they will organize their findings.

“We will start with a box-by-box survey,” Hinton explained. “We will create a processing plan for how we want to arrange and describe the collection. We're looking at two major sections: legal and scientific. The legal part includes the depositions and documents from the trial. The scientific component includes the documentation around Agent Orange itself. What the chemical companies knew, and when they knew it.”

As with any true archival work however, they do not know what they will find.

“What we have so far are pieces of the puzzle, but these litigation papers are the motherload we've been missing,” Maxner said. “We hope to ascertain whether the effects of Agent Orange were foreseeable, and did these corporations use it anyway?”

This is just one question the researchers hope to answer. However, that's not the only good that could come from the process.

According to the U.S. Department of Veteran Affairs, Agent Orange has been linked to leukemia, Hodgkin's disease, diabetes, Parkinson's disease and many other illnesses. Additionally, scientists confirm that once dioxin is introduced to the body, it becomes part of the genetic makeup. This means victims of Agent Orange are passing the poison onto their children and grandchildren.

“There are many future possibilities depending on what we find in these files,” Mondt said.

“Veterans may be able to get better medical help. Perhaps their children will gain access to benefits they need. Vietnam could better clean their soil and environment.”

The implications wouldn't stop there.

“This could give validation and a sense of justice to many veterans and their families who have been negatively affected,” Maxner said.

The effects of Agent Orange have most certainly lingered physically, but they've also lingered in an intellectual and emotional sense.

Senior officers were given this chemical and told it was safe to use. Furthermore, it would help their troops – they made decisions based on that information.

Admiral Elmo Zumwalt, Jr. was one of those officers.

An admiral in the U.S. Navy during the Vietnam War, Zumwalt ordered the use of Agent Orange in a crucial moment to reduce casualty rates for his sailors. His own son, Elmo R. Zumwalt III, was one of those men.

Relieved that his troops and his son survived, the mission was considered a success. Six months later though, his troops started showing symptoms of dioxin poisoning.

Zumwalt passed away in 2000, but spent his later years advocating for veterans exposed to Agent Orange. Zumwalt was credited with finding the correlation between many cancers and Agent Orange – an extremely rare accomplishment for someone with no medical training. It is assumed that the loss of his son motivated the public service from which many other families have benefited.

Zumwalt is one of many stories in which families have been traumatized, both physically and emotionally, because of Agent Orange's ramifications. These ramifications are still being felt to this day.

“As a Vietnam veteran who frequently attends reunions, it is sad when we read the names of those who have died in the last year from complications of Agent Orange,” said Ron Milam, executive director of the Texas Tech Institute for Peace & Conflict, the parent organization for the VNCA.

“We know we were all exposed to Agent Orange, to varying degrees, and we feel that it is just a matter of time before it affects us. This collection will be important not only to us, but also to our families.”

Maxner, who teaches military history at Texas Tech, explains what these papers could mean on a historical level.

“Agent Orange has been an ongoing controversy we haven't been able to understand because of a lack of transparency from corporate America,” Maxner said. “This information has not been publicly available. To understand what happened in Vietnam, we need that transparency.”

“When we look at the world today, there has never been a time we've needed transparency more. This is an object lesson for today. We need to seek understanding, and the only way we can have that is through governmental and corporate transparency. We hope that by releasing these documents to the American people, we can put to bed the conspiracies that do not have merit and reexamine those that might.”

There also are lessons to be learned from an archival standpoint.

“Even though it's fifty years later, because these documents were preserved, we will have an accurate understanding of history,” Mondt said. “When you put that into play today, we look at people withholding information because it's on a ‘private server' or deleting files off hard drives before they retire them. Those are the documents that answer questions decades later. In the archival world, there are many petitions to continue to keep records with integrity, because we never know what good could come from those in the future.”

In addition to the medical, psychological and historical implications these papers could have, there also is an environmental lesson to be learned.

“If our government had thought through the long-term impacts of Agent Orange like we do in environmental impact studies today, this probably would not have happened,” Maxner said. “In many respects, the environmental awareness we have today, stems from these major blunders of the past.”

When this collection is processed, Texas Tech's Vietnam Center & Sam Johnson Vietnam Archives will become the world's leading hub for research on Agent Orange. The archives, created in 1989 have already hosted millions of visitors over the years, providing resources for researchers and veterans alike.

The Agent Orange collection will exponentially add to those numbers. More importantly, though, the papers will demand accountability for decisions made during America's most controversial war and increase accountability going forward.

“When we can't learn from history, we're doomed to repeat it,” Mondt said. “If there are elements of this war that have been covered up, we must discover the truth.”