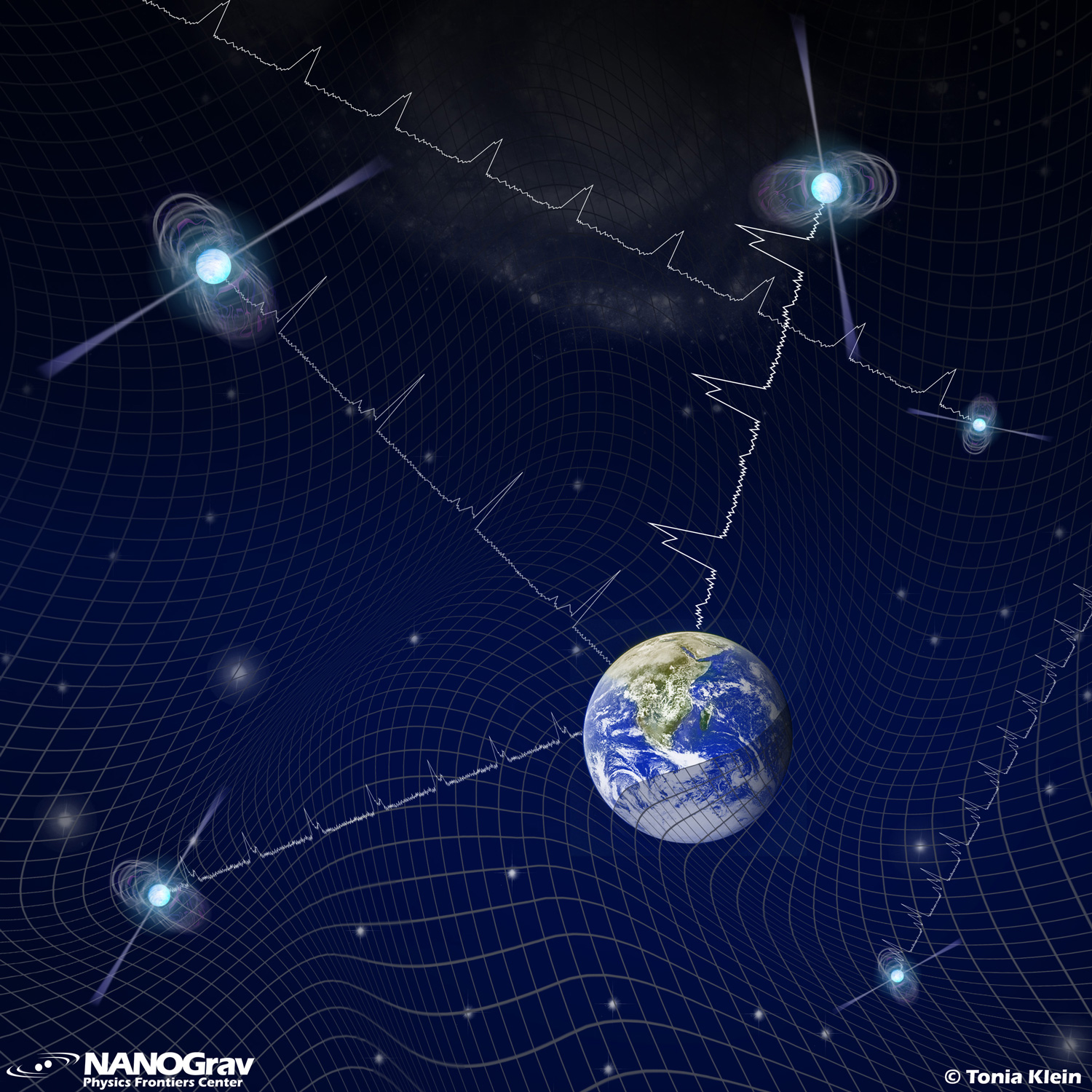 Since the beginning of time, humans have hoped to one day unlock the secrets of the universe. With ongoing research funding from the National Science Foundation (NSF) and the expertise of people like Texas Tech University's Joseph D. Romano, they are now closer than ever.

Romano, a professor in the Department of Physics & Astronomy, conducts research in gravitational-wave data analysis, specializing in searches for weak gravitational-wave signals coming from the very early universe. As such, his work fits in perfectly with that of the North American Nanohertz Observatory for Gravitational Waves (NANOGrav).

Astrophysicists now detect low-frequency gravitational waves using millisecond pulsars – rapidly spinning, superdense remains of massive stars that have exploded as supernovas. These ultra-stable stars are nature's most precise celestial clocks, appearing to “tick” every time their beamed emissions sweep past the Earth, like the beacon on a lighthouse. Gravitational waves may be detected in the small but perceptible fluctuations – a few dozen nanoseconds over 10 or more years – they cause in the measured arrival times at Earth of radio pulses from these millisecond pulsars.

“The goal is to detect the presence of low-frequency gravitational waves in an effort to better understand how supermassive black holes and galaxies form,” Romano said.

The precision required in these measurements makes Romano's work especially important. You see, he helps develop the data analysis algorithms that identify the presence of gravitational waves. For his role in the NANOGrav PFC collaboration, Romano will receive $298,366 over the next five years.

When it was founded in 2007, NANOGrav consisted of 17 members in the U.S. and Canada. With support from the NSF in the form of a Partnerships for International Research and Education (PIRE) award in 2010 and a PFC in 2015, NANOGrav has grown tremendously. It is now a truly global collaboration with around 200 students and scientists at about 40 institutions around the world. Over the past few years, NANOGrav PFC students, postdoctoral researchers and senior personnel have pushed the frontiers of multi-messenger astrophysics, achieved an unprecedented sensitivity to low-frequency gravitational waves and enabled a transition into an astrophysically interesting territory: NANOGrav is now poised to detect low-frequency gravitational waves and use them to study the universe in a completely new way.

NANOGrav's five-year program will make use of the unique capabilities and sensitivity of the Green Bank Telescope (GBT) in Green Bank, West Virginia. The GBT is located in the National Radio Quiet Zone, which protects the incredibly sensitive telescope from unwanted radio interference, enabling it to study pulsars and other astronomical objects. The program also uses data from the Very Large Array (VLA) in New Mexico and the Canadian Hydrogen Intensity Mapping Experiment (CHIME) in Canada. In addition, NANOGrav will use legacy Arecibo Observatory data, which will anchor combined future data sets and greatly increase sensitivity.

“The NANOGrav PFC has made significant progress over the last five years, remaining at the frontier of fundamental physics research,” said Jim Shank, the program director for NSF's PFC program. “The center now seems close to making a breakthrough discovery in gravitational waves and the way we perceive the universe.”

NSF currently supports 10 other PFCs, which range in research areas from theoretical biological physics and the physics of living cells to quantum information and nuclear astrophysics. By bringing together astronomers and physicists from across the U.S. and Canada to search for the telltale signature of gravitational waves buried in the incredibly steady ticking of distant pulsars, the NANOGrav PFC will advance the mission to “foster research at the intellectual frontiers of physics” and to “enable transformational advances in the most promising research areas.”

In addition to his membership in the NANOGrav collaboration, Romano is a member of the Laser Interferometer Gravitational-Wave Observatory (LIGO) Scientific Collaboration and the Laser Interferometer Space Antenna (LISA) Consortium, both of which are international collaborations of scientists searching for gravitational waves. Romano's prior research experience involved investigations into the relationship between gravitational physics and quantum mechanics. Romano was co-chair of the LIGO Scientific Collaboration Stochastic Sources Analysis Group from 2000-2006 and 2018-2020. He is a member of Texas Tech's STEM Center for Outreach, Research & Education, a member of the American Physical Society and was associate editor of the American Journal of Physics.