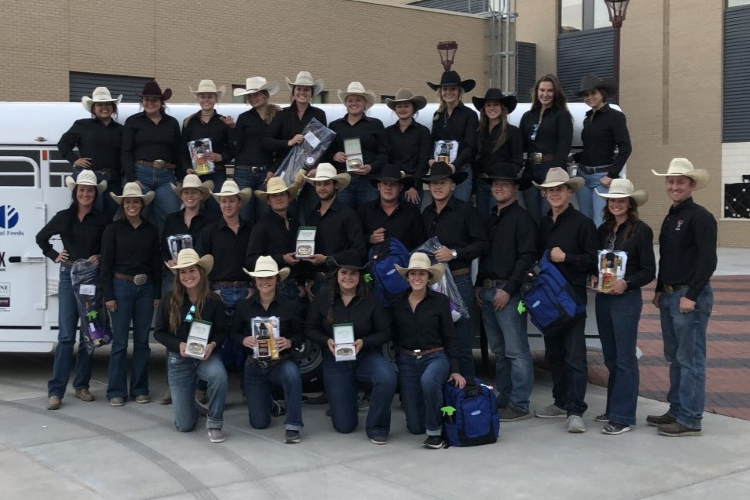 The team won the crown at the Hughes Trailers Collegiate Ranch & Stock Horse Championship over the weekend.

Add another national championship to the Texas Tech University resumé.

This time, it's the Ranch Horse Team in the Department of Animal & Food Sciences, housed within the College of Agricultural Sciences & Natural Resources -- they brought home the gold this past weekend at the Hughes Trailers Collegiate Ranch & Stock Horse Championship at the Tri-State Fairgrounds in Amarillo.

The team from Texas Tech captured the program's sixth national championship and first since 2016 by dominating three other teams in the competition. With the win, the Ranch Horse Team not only earns the national title but also the use of a Canyon-based Hughes Ranch Trailer for one full year.

The team ended a four-year title drought with strong performances at all three levels – Non-Pro, Limited and Novice.

“The Ranch Horse Team was started in 2005 by Kris Wilson at Texas Tech,” said Justin Stanton, the current coach of the Ranch Horse Team. “With fewer than eight members, they were the beginning of a program that would provide the resources, connections and experiences to set them up for their future careers, families and lives. These students are phenomenal, and I am so proud to be able to watch them go and continue to expand the influence of the great program.”

The top two scorers in each of the three divisions comprised the six team members who make up the points riders, even though Texas Tech sent 25 riders into the competition. Riders competed in four riding events – Ranch Pleasure, Ranch Reining, Ranch Trail and Ranch Cow Horse. Texas Tech scored a 148 in the first go-round and a 140 in the second go-round.

Leading the Texas Tech charge in the Non-Pro division were Sidney Dunkel from Archer City and Gracen Walker from Canadian. Dunkel scored 30 of a possible 40 points in the first go-round and 31 in the second go-round, while Walker scored a 29 and an 18.5.

Dunkel, aboard Bobbie Can Do, finished first in the year-end points race with an even 100 points in the Non-Pro division. Colton Baca from Vega finished second with 87 points aboard Paid to Dual XI, while Walker finished third with 77.5 point aboard RC Shiner Doc.

Other members of the Ranch Horse Team are: