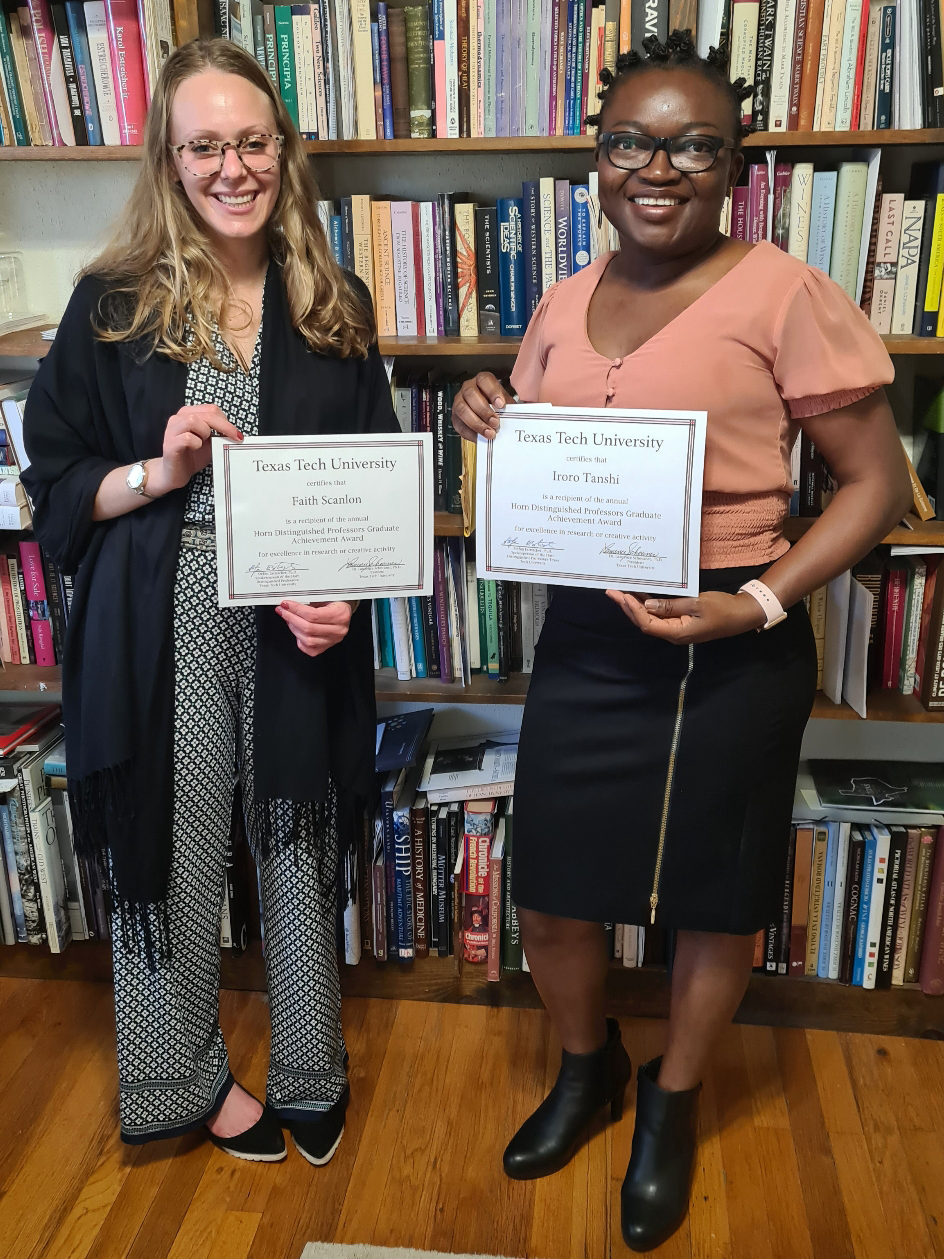 Faith Scanlon and Iroro Tanshi, both graduate students in the College of Arts & Sciences, were recognized for their outstanding research.

Texas Tech University earned its Carnegie Tier One research institution designation six years ago, and for good reasons – both faculty and students produce high-quality research. While outside entities recognize the research happening at Texas Tech, there also is internal recognition.

The Horn Distinguished Professors Graduate Achievement Award was established by the Paul Whitfield Horn Professors at Texas Tech to recognize and reward outstanding research or creative activity performed by graduate students while at the university. This year, two graduate students in the College of Arts & Sciences were selected as the recipients for this esteemed award.

Faith Scanlon is pursuing her doctoral degree in counseling psychology through the Department of Psychological Sciences. She is involved in state-of-the-art counseling research and delivers professional services to individuals in the justice system, including those with mental illness and substance abuse issues.

Scanlon has 10 publications, many in the top research journals in her field; a book chapter in print through Oxford University Press; and eight manuscripts in preparation, most as first author. She has given numerous presentations at national and international conferences and is actively pursuing federal funding for her research.

“I am so excited to receive this award, and I am very surprised, in the best way,” Scanlon said. “It's very humbling, and it's an honor.

“I work with Dr. Robert Morgan, a professor of counseling. Largely, our work is in the area of forensic and correctional psychology within the counseling psychology department. So, my research focuses on antecedent factors that lead to criminal justice involvement, including criminal risk and trauma, and treating people who are involved in the criminal justice system and have serious mental illness.”

Scanlon's dissertation project is a randomized control trial of a treatment program for people with serious mental illness in the Lubbock County Detention Center.

“It's a mixed-method study looking at how the program is implemented in the jail and also the treatment outcomes,” she said. “Only 35% of people in jail who need mental health treatment get it. It's a really underserved population and part of that is because people filter in and out of jail really quickly. Jails don't typically have a lot of resources, so this is a shot at putting a program into place at the jail and seeing how it goes.”

Scanlon's path to her specific research area was noticing a correlation between those incarcerated – referred to as “justice-involved populations” – and mental illness.

“When I was an undergraduate, I learned that justice-involved populations have the highest rate of mental illness,” she said. “At that time, I was really interested in personality disorders, and there's also a higher rate of personality disorders in justice-involved populations than there is in most other populations. Then, as I became more involved in the research and got to know this area, I saw that, even beyond personality disorders, the need for treatment was so great. So, that need has shaped the projects I've been working on here at Texas Tech. I also work remotely for a team at New York University that studies the impact of incarceration on public health, and that's really informed my path as well.”

Morgan, who nominated Scanlon for the award, said he's excited to see the impact Scanlon's research has in the justice system.

“Faith is engaged in cutting-edge research and professional service delivery to justice-involved individuals,” Morgan said. “She is an extremely motivated and enthusiastic researcher who has already produced 10 peer-reviewed publications and 17 national and international conference presentations – an impressive record for someone only four years into her doctoral studies.

“These accomplishments are impressive, but what I am most excited about is the applied nature of her work as she is already producing research designed to impact how we treat individuals in the justice system. The ultimate aspiration of a clinical scientist is to produce research that impacts the lives of others – we aim to make the world a better place – and I am particularly excited that Faith is already doing so. Her work is important, and it will make a difference, particularly for under-served and disadvantaged populations like those in the criminal justice system.”

Iroro Tanshi is a doctoral candidate in the Department of Biological Sciences. Her international award-winning research focuses on tropical bat research and conservation with focus on Nigeria and Cameroon. She is an emerging leader in African biodiversity conservation and has secured her own research funding.

Tanshi has published several original papers in scholarly journals as well as a book chapter. She also has presented her work at multiple international conferences and has won the Woman in Conservation award (2017), the Karl Koopman Award (2019), the Future For Nature Award (2020) and is a nominee for the Whitley Fund for Nature Award – also known as the “Green Oscars.”

“The first time I heard I received the award, I was like, ‘Oh my gosh, I can't believe this is happening,'” Tanshi said. “This is the highest award for any graduate student in the Texas Tech University System. So, to be recognized at that level as having done research and engagement, that was just mind blowing. It was a heart-stopping moment for me. It's not very often that academic institutions recognize something good that someone does, so it was just a thoroughly wonderful feeling.”

Tanshi is currently researching an endangered species of bats in the mountains of Nigeria. She wants to understand the ecological factors and processes that determine where bat species occur at different mountain strata (low to highlands) in her native Nigeria.

“I chose to do my doctoral research in the forested mountainous area – Africa's largest bat diversity hotspot – of Nigeria on the border with Cameroon because it provides the unique opportunity to address some exciting ecological questions, such as bat ecological diversity patterns,” Tanshi said. “And, ultimately, if climate change drives this pattern in a different direction, this work will provide a reference to guide mitigation efforts for bats. So, there are a lot of major ecological questions: What's the pattern of bat diversity along elevational gradients? What species are in the lowland vs highlands? How do they coexist?”

Tanshi was nominated for the Horn Professor Graduate Research Award by Tigga Kingston, a professor of biological sciences.

“Iroro has combined academically rigorous and physically arduous doctoral research in one of Africa's most significant biodiversity hotspots with a deep commitment to community engagement and in-country capacity building,” Kingston said. “She has been recognized worldwide for her achievements in community-based species conservation with prestigious awards and is widely acknowledged as an emerging leader in African biodiversity conservation. Few people can say they are bringing a species back from the brink of extinction, but this is exactly what Iroro is set to do. She brings unmatched credit to our university.