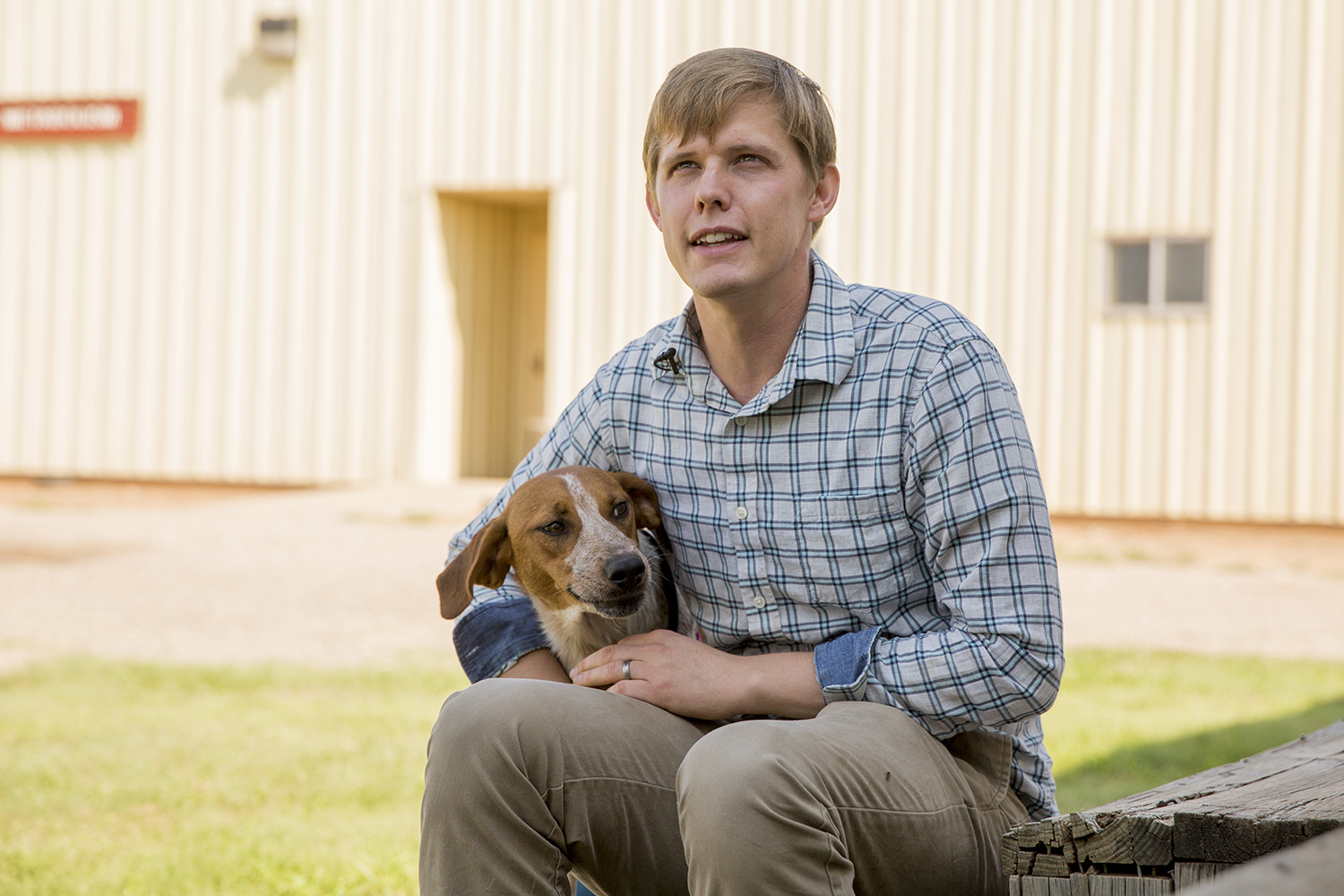 Nathan Hall is the Director of the Canine Olfaction Research and Education Laboratory.

Over the last few decades, detection dogs have been trained to sniff out myriad of harmful elements, from criminals and drugs to explosives and diseases. Their ability to accurately find potentially dangerous people, narcotics and incendiary devices and detect potentially life-threatening illnesses has helped make the world a much safer place while saving thousands of lives.

Nathan Hall, an assistant professor of companion animal science in the Department of Animal & Food Sciences at Texas Tech University and the director of the Canine Olfaction Research and Education Laboratory, is hoping detection dogs can have the same accuracy in finding agricultural pests and plant pathogens as they have finding narcotics, explosives and diseases.

Hall, along with College of Agricultural Sciences & Natural Resources postdoctoral research fellow Edgar Aviles-Rosa and Virginia Tech researchers Erica Feuerbacher and Mizuho Nita, will test the capacity and capability of detection canines as an early detection tool against invasive species and diseases.

"This project will allow us to investigate the fundamental capability of the canine nose to identify and detect agricultural pests and diseases, which cost multi-millions of dollars in damage annually," Hall said. "While exploring the sensitivity and resolution of the dog's nose, we also will evaluate the capacity of already scent trained dogs in sport scent work through the National Association of Canine Scent Work (NACSW) across the U.S. as a means to support farmers with an early detection tool for agricultural diseases."

Their research is being bolstered by a $475,000 grant from the Agriculture and Food Research Initiative of the United States Department of Agriculture (USDA) National Institute of Food and Agriculture's Cooperative State Research Education and Extension Service.

While West Texas is known for its cotton production, the wine grape industry continues to grow in the region and it is an important industry throughout the U.S. Statistics from the National Association of American Wineries shows U.S. grape production is valued at more than $6.5 billion.

However, the sustainability and profitability of vineyards depends on their ability to detect and eliminate diseases and pests that attack the grape plant, such as powdery mildew and the spotted lanternfly. Together, estimates show those invasive species cause more than $300 million in annual losses for the wine grape industry.

Hall, however, believes detection dogs have the ability with their olfactory sensitivity to detect these threats and hopes that canine detection technology can be easily deployable in the agricultural industry and be cost-effective at the same time.

Early detection would not only limit the impact of these threats to agriculture but also help reduce the use of pesticides. Currently, efforts to detect and eradicate powdery mildew and the spotted lanternfly are neither practical nor cost-effective. However, a developed canine detection program in rural communities, where canines are readily available and underutilized, could be the answer.

Utilizing equipment and methods already in place at the Canine Olfaction Lab, Hall hopes to be able to train dogs to detect powdery mildew and spotted lanternfly eggs in a short period of time. His theory is based on past research that show that canines can be trained to detect asymptomatic plants infected with laurel wilt disease and citrus greening and a variety of insects, as well as the ability canines have to discriminate between various scents.

The canines will first show the ability to detect powdery mildew and spotted lanternfly eggs under controlled conditions using precise odor delivery from automated olfactometers. Hall and his team will then measure the dogs' detection sensitivity limits to estimate the earliest phase of powdery mildew disease dogs can detect, and the sensitivity limits dogs have for spotted lanternfly egg masses. This will be used to assess the detection capabilities of the dog.

In a second phase, partnering with sport trained scent-work dogs, Hall will evaluate the capacity for dog teams across the country to participate.

Hall estimates the dogs will have a success rate of around 85% and will receive training to alert to the training odor when detected. Once the dogs demonstrate the ability to effectively detect the odors in the lab, they will be taken into the field to test the ability to do the same on live wine grape vines and leaves.

If dogs are able to detect these threats on the field, Aviles-Rosa believes this research will have a significant impact in agriculture as this research can be extrapolated to other crops and diseases. This research could prove that canines can be more valuable than previously thought, which could be a great asset to U.S. agriculture.

DISCLAIMER: Any opinions, findings, conclusions, or recommendations expressed in this publication are those of the author(s) and do not necessarily reflect the view of the U.S. Department of Agriculture.