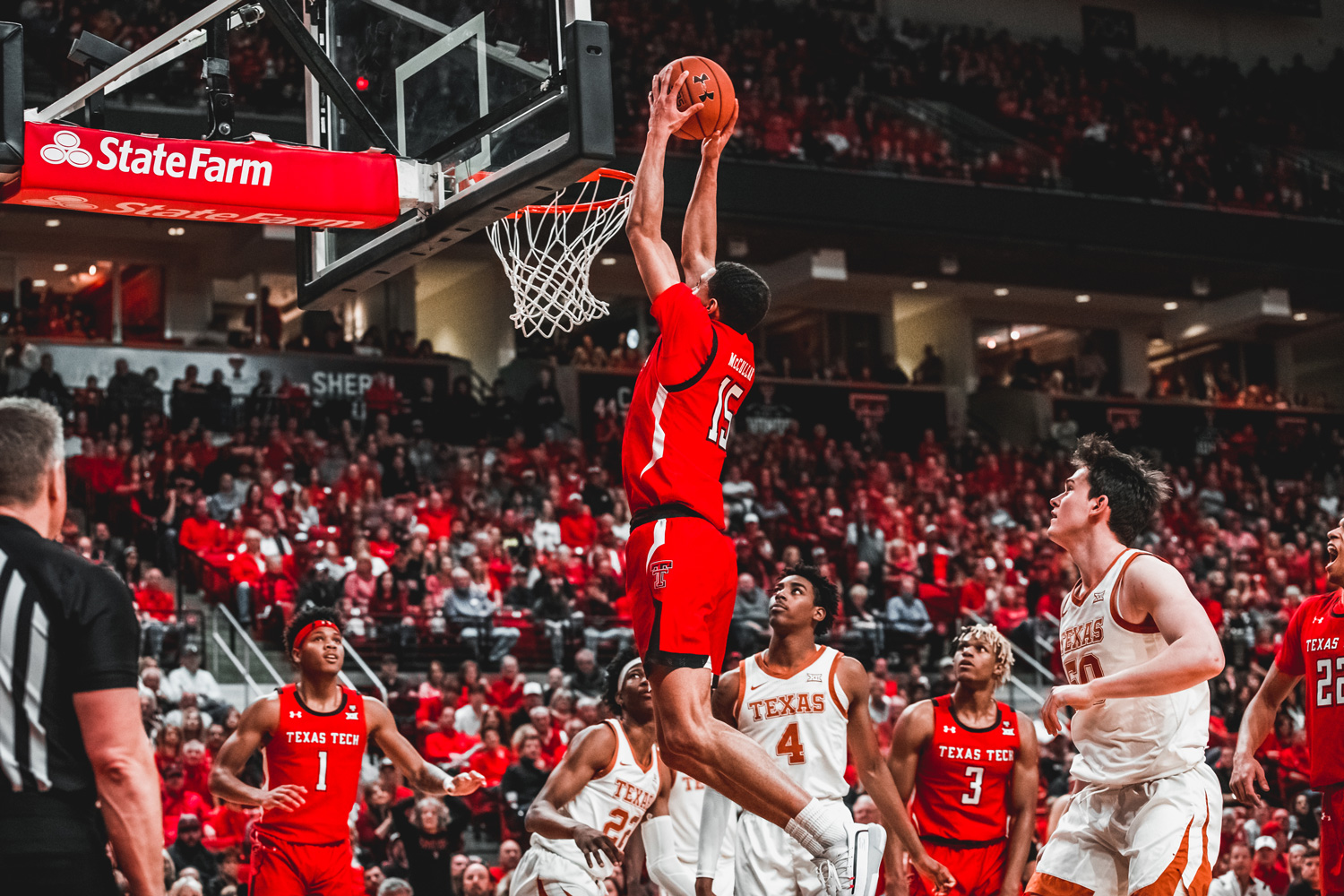 The sounds of basketballs bouncing, sneakers squeaking and fans finding their seats filled the Sprint Center in Kansas City as rivals Texas Tech University and the University of Texas prepared to open the Big 12 men's basketball tournament on March 12, 2020. Both the Red Raiders and Longhorns were looking to improve their seeding in the eyes of the NCAA Tournament selection committee for next week.

Instantaneously, everything changed. Both teams were ushered off the floor, and never returned. Not that day, not the next, not next week, not for the rest of the season. Across town, the Lady Raiders' run in the women's Big 12 tournament ended almost as soon as they arrived.

Texas Tech basketball wasn't alone, not within the sport nor within the school. Later that day, the No. 2-ranked Texas Tech baseball team's Big 12 Conference opening series against West Virginia was postponed after the Mountaineers announced they would not travel to Lubbock.

The next day, the Big 12 announced all winter and spring sports would be canceled for the remainder of the year out of concerns about the coronavirus. No baseball, softball, golf, tennis or basketball. The Texas Tech men's track team would not get a chance to defend its national title. The men's and women's NCAA tournaments were called off as well, and college athletics were left in limbo, unsure when, or if, they would resume.

Add to the fact that Texas Tech football was going into a crucial off-season after the first year in the Matt Wells era, and that it was unknown at that point what the financially important fall season would look like, if it would be played at all, and it was a very challenging time in Texas Tech athletics.

Along the way, two coaching changes were made. Krista Gerlich returned to her alma mater as head coach of the Lady Raider basketball team, the program she helped lead to the women's basketball national championship almost three decades ago. In October, Sami Ward came from Loyola Marymount to take over as the new softball coach at Texas Tech, inheriting a team that was off to another good start before the season was cancelled.

Eventually, everyone involved would get as good a handle on dealing with the pandemic as they could, instituting new playing and practice rules, employing social distancing and mask-wearing measures and getting as close to normal as is allowed at the moment. A way forward was forged that allowed for a full football season, and the basketball season is well underway.

No one is quite sure how that path will look in 2021. The development of COVID-19 vaccines has given hope to the idea that things could soon return to normal, but not, at least, for the immediate future. Teams will still play under pandemic restrictions for the time being. But, at least, sports are being played.

While it was not in season in the spring when everything in the sports world was shut down, it was clear the future of collegiate sports was going to depend on how college football returned to the fold.

To the Big 12's and NCAA's credit, they found a way to have a season in the middle of a pandemic, albeit choppy and uncertain at times, and in some places without fans or bands in the stands. At Texas Tech, capacity at Jones AT&T Stadium was limited to 25% with social distancing and mask mandates throughout the stands.

Once the season started, the Red Raiders showed they were on the rise with some bright spots along the way. There also were plenty of highlights, including wins over West Virginia and Baylor.

The Texas Tech men's basketball team opened the 2020-21 season in the Top 25 and have faced one of the tougher schedules in the country while staying in the hunt for a Big 12 championship and top seed in the NCAA tournament.

This effort follows a 2019-20 season that saw the Red Raiders finish 18-13 overall and 9-9 in the Big 12. Freshman Jahmi'us Ramsey became the first Texas Tech player in school history to earn Big 12 Freshmen of the Year and was selected as the 43rd overall pick in the NBA draft by the Sacramento Kings.

On the women's side, Texas Tech also took some major strides forward on the court. Led by sensational sophomore Chrislyn Carr and steady senior Brittany Brewer, the Lady Raiders set marks for the most overall victories and conference victories in seven seasons, finishing 18-11 and 7-11 in Big 12 play. Eight months later, the Gerlich era began at Texas Tech with a win over UT-Rio Grand Valley.

With perhaps its deepest pitching staff under head coach Tim Tadlock and an offense that possessed speed, power and athleticism, the Red Raiders got off to a tremendous start, winning 16 of their first 17 games, including taking two games in a weekend at No. 9 Florida State.

That elevated the Red Raiders to No. 1 in two of the six different college baseball polls at one point, and a consistent Top 5 spot throughout the season. The Red Raiders appeared well on their way to another College World Series appearance until the pandemic cut the season short.

Clayton Beeter elevated himself from closer to No. 1 starter to the No. 66 overall pick in the June MLB draft by the Los Angeles Dodgers. Junior Bryce Bonnin was taken No. 84 overall by the Cincinnati Reds after going 2-0 with 27 strikeouts in 14 innings. Seniors Brian Klein and John McMillon signed free-agent deals to begin their pro careers.

Not only was the Texas Tech softball team out of town when the sports world closed down, the Red Raiders were not even in the continental 48 states, having to quickly board a plane home from Hawai'i after winning the opener of the Rainbow Wahine Classic in Honolulu.

That brought the season to an end for Texas Tech, which finished 17-9 and picked up early season wins over No. 17 South Carolina and No. 15 Georgia. The Red Raiders also ended the season on a seven-game winning streak that included a sweep of the Jeannine McHaney Memorial Classic, hosted by Texas Tech in early March.

In October, a change in leadership within the program resulted in the hiring of Ward, a three-time All-West Coast Conference (WCC) Coach of the Year during her five seasons at Loyola Marymount, where she compiled a 138-109 record and 38-21 mark in the WCC.

Not only did the basketball season end before the NCAA postseason began, but so did the indoor track and field season. The men's and women's teams were able to get their entire regular season in before finishing second at the Big 12 indoor championships.

The Texas Tech women's team earned five gold medals. Ruth Usoro took two of those medals, winning the long jump and triple jump. Chinne Okoronkwo defended her title in the pole vault, while Seasons Usual took first place in the weight throw and Gabrielle McDonald did the same in the 60-meters.

The men's team took home two gold medals, both by the same competitor as Dakieddine Hedeilli won both the mile run and the 1000-meter. Ashton O'Conner took second in the 200-meter to give the men's team their second-place finish.

In the fall, the Texas Tech cross country teams were able to complete in two meets before the Big 12 championships in Lawrence, Kansas. the day before Halloween. At the Big 12 meet, the men's team finished fifth and the women eighth.

The men's and women's golf teams barely got going before the season was shut down, each competing in just three tournaments.

The women's team had the best showing of the short season, finishing second in tournaments at Southern Methodist University and San Juan, Puerto Rico and ninth at the Icon Invitational in Houston. Sofia Garcia was named second-team Women's Golf Coaches Association All-American and Golfweek All-American honors, and this fall was named to the Annika Award preseason watch list.

Like golf, the men's and women's tennis teams at Texas Tech were just getting into the meat of their season when things were shut down.

The Texas Tech men's team was off to a solid start at 12-5 with six games against ranked teams. Texas Tech picked up victories over two of those teams, beating No. 20 Mississippi State and No. 27 Middle Tennessee State.

The Texas Tech women's put up a 5-7 mark overall and a 1-2 mark in Big 12 Conference play with a victory over TCU.

One unfortunate result of the pandemic on the collegiate sports world is the distillation of schedules into conference-only slates. That is what happened to the Big 12 in soccer, which was to be the first sport to return to action in Raiderland until its opener on Sept. 11 was postponed.

The reduced season and altered playing conditions proved to be a challenge for the Red Raiders, who finished eighth at 2-5-2 despite returning eight of 11 starters from a very good 2019 team and being tabbed as the preseason favorite in the league.

Like many sports around the country, the Big 12 volleyball season was limited to a league-only slate with no postseason conference tournament, while the NCAA postseason tournament was moved to the spring.

Texas Tech got off to a solid start by splitting two-game series against West Virginia, Iowa State and TCU and also earned a sweep of the University of Oklahoma in the next-to-last series of the season.