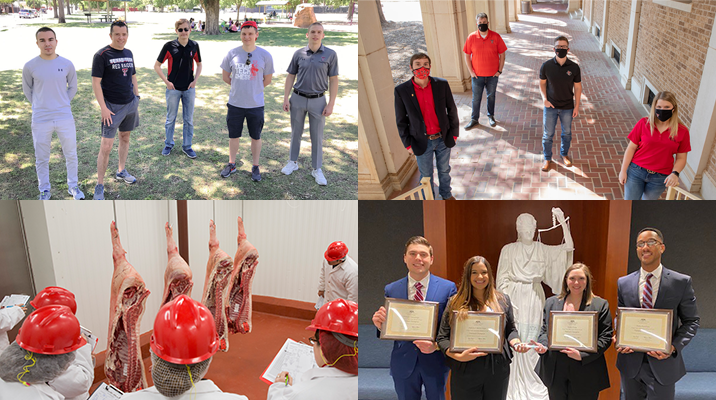 Since 1946, collegiate chess teams from across the Western Hemisphere have gathered in December to compete in the Pan-American Intercollegiate Team Chess Championships (Pan-Ams). Texas Tech University's Knight Raiders dominated the 2019 tournament, winning with a rare, 6-0 perfect score and qualifying for the President's Cup, also known as the Final Four of College Chess, to be held in April in New York City.

The team spent the following months preparing for the President's Cup. But like many other competitions, the event was canceled due to the global coronavirus pandemic.

Instead, the team has found something else to celebrate. The US Chess Federation (US Chess), the governing body of U.S. chess competition, named Texas Tech the 2020 Chess College of the Year, recognizing the university's dedication to the chess community.

The disruption created by COVID-19 could not slow the Texas Tech University Meat Judging Team from continuing its dominance, as the group from the Department of Animal & Food Sciences claimed its second straight and 15th overall national championship in its home state by winning the High Plains Intercollegiate Meat Judging Contest hosted by Caviness Beef Packers.

The national championships are typically held every year in mid-November in Dakota City, Nebraska. But since the coronavirus pandemic began in March, many of the American Meat Science Association judging events held throughout the fall were canceled as colleges and universities experienced travel restrictions. Only three contests were held, with the High Plains contest on Nov. 1 designated as the 2020 national championship just prior to the event.

For a full recap of the national championships, click here.

As two Texas Tech University School of Law teams traveled to the American Bar Association (ABA) arbitration finals in Chicago, the odds of one of them coming home victorious seemed to be in their favor.

The team of second-year students Patricia Cabrera-Sopo, Emily Fouts, Drake Pamilton and Michael Samaniego bested the other nine teams, including a win over the other team of Red Raiders in the semifinals, to claim the crown at the competition, held Jan. 24-25, 2020.

Both Texas Tech teams advanced to the national finals after claiming the top two spots at the regional competition in November.

For more information on the law school's victory, click here.

In the two decades since the challenge began at Texas Tech, the university's team has consistently been among the top eight in the competition, earning second- and third-place finishes in various years and their first first-place finish in 2018. For the first time in the competition's history, this year's teams – including Texas Tech team members A.J. Bunn, McKenzie Arrott and Rob Tuckfield – competed virtually.

The Financial Planning Challenge is the culmination of a months-long effort.

For more on the Financial Planning Challenge, click here.