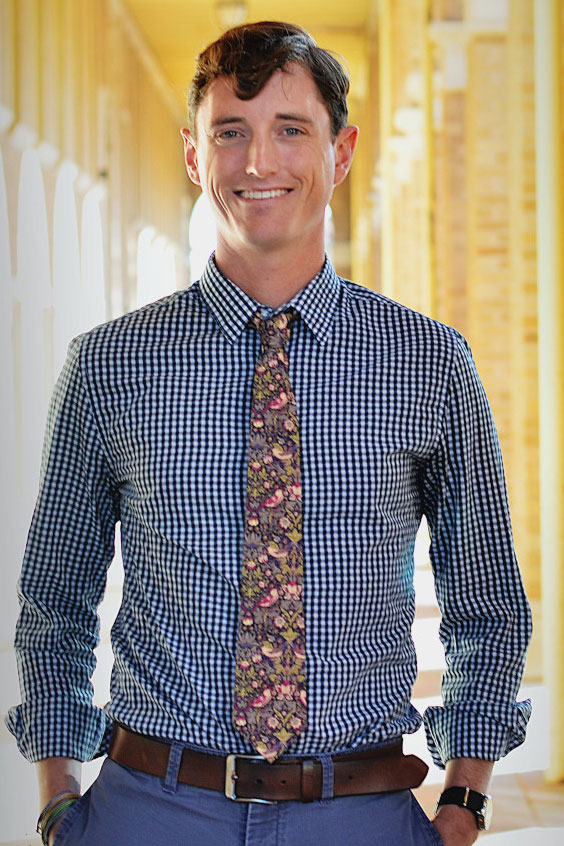 Nick Smith will study the defense mechanisms of pitch pines in Concord, Massachusetts.

In his last manuscript, "Wild Fruits," Henry David Thoreau wrote about the pitch pines near his home in Concord, Massachusetts – or, more specifically, he humorously wrote about the difficulty of trying to gather their pine cones:

"The cones are now all flowing with pitch and my hands are soon so covered with it that I cannot easily cast down my booty when I would, it sticks to my fingers so; and when I get down at last and have picked them up, I cannot touch my basket with such hands, but carry it on my arm, nor can I pick up my coat which I have taken off, unless with my teeth, or else I kick it up and catch it on my arm. Thus I go from tree to tree rubbing my hands from time to time in brooks and mud holes in the hope of finding something that will remove pitch, as grease does, but in vain. It is the stickiest work I ever did, yet I stick to it."

Pitch pines are so named because of their sticky sap that may discourage some predators, like the unlucky Thoreau.

With a grant from the National Park Service's National Center for Preservation Technology and Training, Nick Smith, an assistant professor in Texas Tech University's Department of Biological Sciences, and researcher Jeff Licht from the University of Massachusetts-Boston are beginning important research to determine whether the Concord pitch pines' defense mechanisms can fend off a far more ominous threat, the southern pine beetle.

So far, the pitch pines in Concord have been protected by the area's frigid winter temperatures. But as temperatures rise, the southern pine beetle has been making its way up the Eastern seaboard, destroying pine species in the South and Mid-Atlantic states. Already 80% of the pitch pine landscapes from Georgia to Maine are subject to southern pine beetle incursion, and some scientists suggest the insect will reach Nova Scotia in the next decade.

Southern pine beetles have been trapped in Massachusetts in Martha's Vineyard and Cape Cod.

"This tracking suggests the species may make it to Concord soon," Smith said. "By catching an attack early, we may stand a better chance of saving the pitch pines, which are shrinking in population size due to human activities but are culturally and historically important – as evidenced by the fact that they were written about by early American naturalists such as Thoreau."

Smith and Licht will monitor leaf and sap chemistry of the pitch pines in the historic Hapgood Wright Forest in Concord, famous for ambles by Thoreau and fellow transcendentalist Ralph Waldo Emerson. Ralph Waldo Emerson These pines have not yet been attacked by the beetles – a state Smith calls "naïve."

"The pines there have not yet experienced an attack, so we're hoping we can set up a monitoring protocol that will allow us to determine if and when an attack has occurred," Smith said. "Pitch pines exhibit potent defense mechanisms against most pathogens and insects. However, beetle defense is modest, and it is unclear whether defenses in naïve, pre-attack Concord pitch pines will ward off the southern pine beetle."

Smith and Licht will obtain comprehensive measures of individual naïve pitch pines to compare the defenses of naïve pines with the defenses of pines that have adapted to the beetle attacks. The information also will serve as pre-attack data. Any changes found in future monitoring could indicate the onset of a beetle attack.

Their samples will be preserved in laboratories and herbaria for future use by scientists, land managers, policy makers and concerned citizens when naïve pitch pines may be difficult or impossible to find. These records will serve as a snapshot of this culturally, historically and ecologically important species.

The work comes amid the National Park Service's ongoing battle to preserve the pines nationwide. It spent $75 million to overcome an epidemic in South Dakota, and it's been fighting the beetles in Colorado since 2005.

"The pre-attack monitoring approach used here is novel and could be applied to other areas that may be susceptible to southern pine beetle attack as the climate warms, such as Acadia National Park in Maine," Smith said. "Our project in Concord will outline an approach for doing this. Our preservation techniques will allow the pre-attack data to be used in a scientific context, while providing specimens that can help to enhance the cultural and historical understanding of the species."