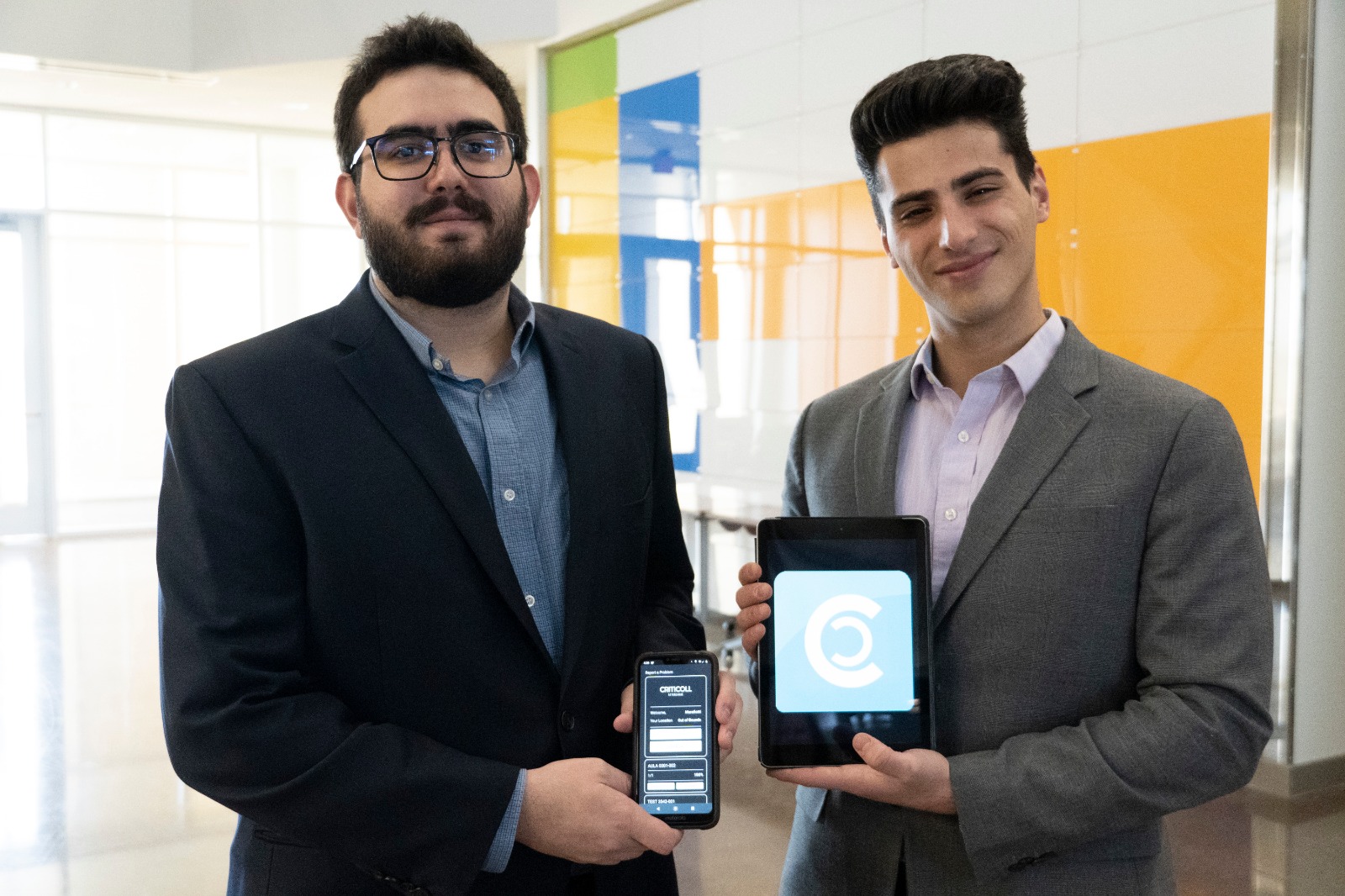 CritiColl is designed to make taking attendance and communication easier for professors and students.

When Matheus Pagotti arrived at Texas Tech University, he had a rough first semester keeping up with his classes. He needed something to help him stay organized and on top of all his tasks, but almost all his classes used different homework and communication platforms. This made it difficult for him to keep track of all his classwork.

Rather than continuing to struggle to keep everything straight, Pagotti developed the initial ideas for CritiColl – an app that would simplify homework and communication into one platform.

Pagotti began working with Pedro Marafiotti and Felipe Melz, the team's developer, and the three took CritiColl to the Texas Tech Innovation Hub at Research Park. From there, the idea of an app for homework and class communication took off.

From idea to innovation

To help get the idea up and running, Pagotti and Marafiotti participated in almost every competition the Innovation Hub offered.

Through the competitions and with the help of mentors at the Innovation Hub, they started to realize their original idea was a bit complex. Pagotti said the Innovation Hub helped them do more customer discovery work, which involved talking to different people who might interact with the app to discover who the customers would really be and then fitting the app to better serve their needs.

For the next three years, they participated in Innovation Hub competitions and learned from mentors and other companies. It became a cycle of them receiving feedback, doing more customer discovery and implementing the feedback into the CritiColl system.

They also unsuccessfully applied to the Innovation's Hub Accelerator Program three times before being accepted the fourth time. Pagotti said they weren't upset by being rejected the first two years because of the amount of feedback they received in the process.

"Whether we like to think we're entrepreneurs, we're still 22 years old," Pagotti said. "So, although we have a little bit of experience, we still have a lot to learn, a lot of things to encounter and a lot of obstacles to overcome."

This cycle helped expedite their development process, Pagotti said, and ultimately led to the attendance app they have available for professors and students today.

"After three years of doing the same thing over and over and repeating that cycle, we came to the application that we have today, where attendance is the main focus," Pagotti said. "We want to help professors take attendance in a shorter time and promote participation, so students are encouraged to go to class."

After narrowing the app's focus, Pagotti and Marafiotti learned that how professors take attendance, especially those teaching large classes, is outdated.

Through talking with various faculty members, Pagotti said they realized many large lectures either didn't take attendance or used methods that were expensive or unsecure.

"We asked ourselves, 'How can we create an approach where we can help professors save time in and out of the classroom, all while positively promoting students to participate in class?'" Pagotti said.

CritiColl answers this question by allowing students to download an app that quickly and effectively records their attendance without wasting class time or becoming a distraction.

Pagotti and Marafiotti also learned from customer discovery and outside research that, with today's technology, it could be easy for somebody to take a picture of an attendance code and send it to their friends. To avoid this with CritiColl, the code changes every half a second so it can't be shared, and students cannot log in to another account once they have logged into theirs.

"So, not only are we providing professors with a promise their students are in class," Pagotti said, "but it also is an encouragement for students to participate in class."

The app also has a communication platform that allows professors to send notifications to students. Pagotti said they included this feature because they realized that, despite email being the primary method of communication for professors, most students don't check their email outside of class.

"We thought about, 'How can we make it easier for professors to communicate with their students when they forget to share something in class?'" Pagotti said. "We wanted to create an easy process that all our users could leverage."

Getting into the classroom

The app was first used in classrooms in the Spring 2019 semester for alpha testing. That semester, the team tested the app in a classroom with about 40 students for four days. Pagotti said this allowed them to understand how the attendance algorithms worked and to receive feedback.

After making some adjustments in the summer, they introduced CritiColl to a separate classroom and reintroduced it to the professor that alpha-tested it the previous semester. Between the two courses, the app was used by about 170 students, and Pagotti said they implemented their feedback during winter break before Spring 2020. In the spring, they started in nine classrooms with more than 900 students.

"We tried to quickly adapt to provide professors with the tools they needed so they could take attendance and promote participation during their online lecture," Pagotti said.

As the university prepares for students to return to face-to-face instruction, as well as online and hybrid courses, Pagotti said they are working to ensure the app is ready for use in any class setting. Currently, they have several professors in larger classes lined up to use CritiColl in the fall, which will equate to around 2,000 users.

"One of our main goals right now is to grow and cultivate professors' support base," Pagotti said.

One of the premises behind CritiColl was helping students feel more connected to their professors and classmates, on top of helping professors take attendance in a more user-friendly format. Pagotti said they wanted to find a way to connect students and break existing social barriers that may lead to a student feeling less plugged-in to a course.

To overcome this, Pagotti said they are hoping to implement a mobile classroom soon, which would allow students to ask classmates and the professor questions.

"When you talk to somebody online and you have that platform to reach out to your peers within your classroom, it breaks that social barrier because you can reach out to people and they can reach back out with an answer," Pagotti said.

Overall, Pagotti said he wants CritiColl to serve as a tool that promotes participation and attendance for students, but also helps them feel more linked to the people in their classes. This connection will help them succeed in and out of the classroom, and hopefully help enhance their student experience at Texas Tech.

"Hopefully, by introducing this application, students start to realize that attendance is crucial and helps their grades, not just from participation, but also in general, because they're learning more," Pagotti said.