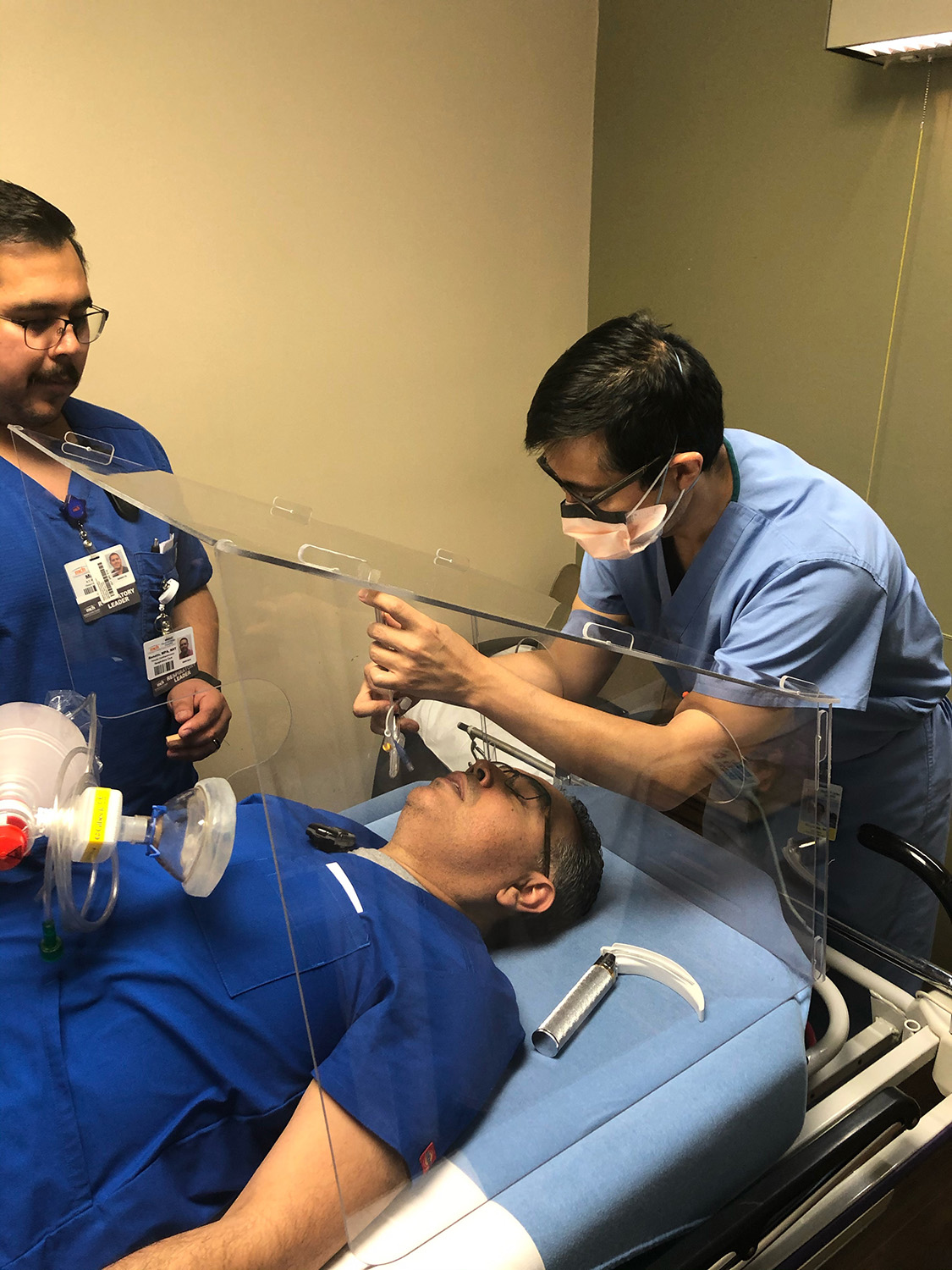 Since the outbreak of the coronavirus in Lubbock, numerous individuals associated with the Texas Tech University community have stepped up to contribute however they can. Students, faculty and staff have devoted time, research and effort. In March, Texas Tech partnered with the West Texas 3D COVID-19 Relief Consortium and began supplying 3D-printed equipment and shipping to the corners of West Texas.

Chase George, a machinist and graduate student in the Department of Mechanical Engineering, and Roy Mullins, a departmental engineer in mechanical engineering, both in the Edward E. Whitacre Jr. College of Engineering, have been working on a number of projects within the relief effort for West Texas hospitals, including intubation chambers.

“Originally, they wanted to 3D-print things like ventilators, splitters and the N95 masks – all of that stuff,” George said. “Some of the deans within Texas Tech got a group together and asked if we could get all the people who do 3D printing on campus to start making parts. We formed a group and started meeting and coming up with ideas for what we could make. We assembled some 3D-printed face shields, and we've already given those to hospitals. The chambers were our other big project.”

Mullins helped identify making face masks and splitters as feasible, and when intubation chambers came up, the group was ready and willing to tackle that project, too.

“Ultimately my primary role was to help identify what made sense for us to begin manufacturing immediately to make the biggest impact as quickly as possible,” Mullins said. “We wanted to get the order right and identify projects that would be successful, working with our available resources in mechanical engineering and across the college. Chase, along with our student assistants Sam Christenson and Chandler Calahan, have made the intubation chamber assemblies a success.”

The chamber is essentially a box with an open-front face and arm holes near the top, where a patient's head would be, so medical personnel can stick their hands through and work on the patient.

“During intubation, they're working with the patient's mouth, and the mouth is generally open,” George said. “If the patient coughs, the aerosols can travel throughout the room and come in contact with any present personnel.”

The benefits of these types of chambers were shared in a letter published in the New England Journal of Medicine, which detailed an experiment in which a balloon filled with dye was placed in a fake mannequin lung to show how aerosols travel through a simulated cough. Aerosols, the spray or mist of droplets that come from a patient's mouth through coughing or sneezing, can transmit respiratory viruses. Without the chamber, there were dye splatters on the floor, equipment and on present personnel. With the chamber, almost all the dye was contained.

“It's kind of goofy to say it, but it is essentially a sneeze guard,” Mullins said. “It's a plastic barrier that allows the health care professional to stick their arms in to do the intubation procedure while protecting them from any spray or coughing from the patient.”

Although the intubation chambers are part of the project to bring relief to West Texas with 3D-printed projects, the chambers themselves are not 3D printed. George described two different processes for making the chambers – one with laser cutting, and the other with water jets.

“Laser cutting uses a laser to essentially melt the material,” George said. “Imagine there's a large table, and then there's a head with a laser on it. This head moves in a shape that's been pre-drawn, fires the laser, and instantly melts and cuts the material. It works quite well with certain materials but with others it tends to produce fumes. When we switched to polycarbonate, we had to switch to water jetting for that reason. Water jetting is very similar except that it uses a high-pressure water jet with an abrasive material. The abrasive material flows through the water and essentially abrades through the polycarbonate. The process is the same – it traces out the shape that's been pre-drawn and cuts it out.”

George said he and his team have a carefully constructed workflow to optimize production and maintain social distancing. Often, the shop student workers are in full personal protective equipment (PPE), including pants, safety glasses, closed-toe shoes, face masks and gloves to keep the parts they are working with safe from any contamination.

Multiple stations are set up within the shop, with 30 feet of separation between each. There is a station for removing the protective coating on the parts, one for assembly and adhesive application and a final one for applying packing tape to all the corner joints for additional sealing. This process was for the acrylic chambers, which have already been assembled and shipped out. The polycarbonate chambers are easier to assemble and don't require adhesive, so they are packed flat and shipped to be assembled on site.

“We started with the laser-cut chambers and initially assembled 100 of those,” George said. “They've already been sent out to surrounding regions. We've hit the Lubbock area, Amarillo and Wichita Falls. The water jet design is slightly updated and made of out polycarbonate. Polycarbonate is a stronger, more durable material than acrylic. We've worked on 50 of those, and they went out in late April.”

George said the project was meant to have a quick turnaround. The design process was brief so something simple and helpful could be quickly assembled and distributed.

“We made two prototypes and sent them to the University Medical Center,” George said. “We have a couple of contacts over there who we've been going back and forth with. They tested our models, played around with them and gave us some feedback. With their help, we were able to find some features that made them more comfortable for them to use. Then we started producing.”