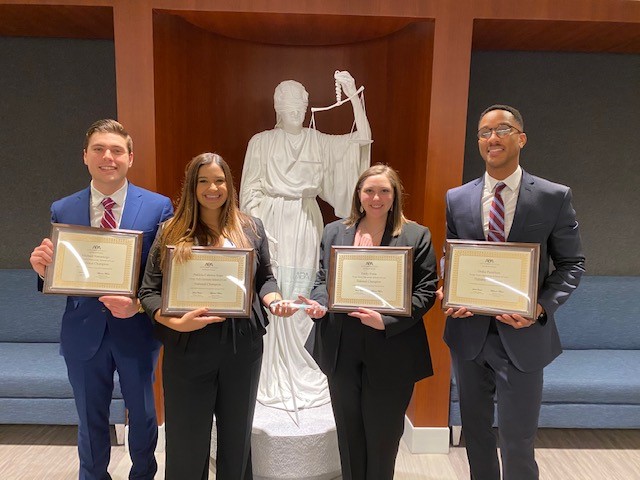 The national championship win is the 46th in the law school’s history.

As two Texas Tech University School of Law teams traveled to the American Bar Association (ABA) arbitration finals in Chicago, the odds of one of them coming home victorious seemed to be in their favor.

The team of second-year students Patricia Cabrera-Sopo, Emily Fouts, Drake Pamilton and Michael Samaniego bested the other nine teams, including a win over the other team of Red Raiders in the semifinals, to claim the crown at the competition, held Jan. 24-25.

Both Texas Tech teams advanced to the national finals after claiming the top two spots at the regional competition in November.

"These students are truly inspiring. Not only are they incredibly intelligent and passionate, they also were more prepared than every other team at the national competition this past week," said Brie Sherwin, President's Excellence in Research Professor of Law and coach of the team. "We received wonderful assistance from our law professors and from our Texas Tech law alumni. And, our students poured their heart and soul into every practice we had."

In the regionals and national finals, the only team to beat the champion Texas Tech team was the other Red Raider squad.

To move on to the final round, the two teams faced off in the national semifinal round, with the eventual champions coming out on top with a 3-2 split decision. The result was the opposite of that from the regional final, where the team of third-year students and eventual national semifinalists came out victorious, 2-1.

"Our ultimate goal in Chicago was to get both of our teams to the national championship round and let them battle it out there," said Robert Sherwin, Champions in Advocacy Endowed Professor of Law and director of the Advocacy Programs. "It was bittersweet that they had to face each other one round earlier, but to be crowned champions and semifinalists at the end of the day should make all Red Raiders proud."

Preparation for the competition started five months ago, when the teams first got together and started practicing. During that time, they spent countless hours together to ensure they were ready for whatever the competition threw at them.

"As each practice passed, you could see the confidence slowly begin to fill the room," Pamilton said. "The preparation that went into this competition was extensive and very time-consuming. At times, I almost thought that this much work was unnecessary. But, having faith in our coaches and trusting the process they put in us has clearly paid off."

The preparation also helped them outside of the competition. Fouts said the work they put into getting ready for the finals made them better lawyers and students.

"I've spent hours and hours of the last semester locked in a room with a group of people who not only made me a better advocate, but became some of my favorite people at the law school," Fouts said.

That closeness was felt by all the team members, and made winning the title all the more satisfying.

"This group of people are the hardest workers I know. We spent hours practicing and encouraging each other," Cabrera-Sopo said. "I have learned so much about practicing law, but also about myself through the dedication this competition required. We had some of the best times traveling, competing and winning together. I'm so thankful I have this memory of winning a national championship with them."

Both teams earned the School of Law points toward the ABA Competitions Championship, where the winner is based on achievement and participation in the four ABA Law Student Division competitions: arbitration, negotiation, client counseling and national appellate advocacy (moot court). The 2019-2020 champion will be determined after all four competitions have taken place later this semester. Texas Tech was named the 2018-2019 ABA Competitions Champion after fielding 10 teams across the four categories.

"Although there were two Texas Tech teams, the reality is we worked together as one family," Samaniego said. "Texas Tech School of Law's 46th national championship would not have been possible without the dedication and commitment of every team member and coach. We were committed to ensuring that we were the hardest workers in the room, and that was demonstrated in every round of the competition."