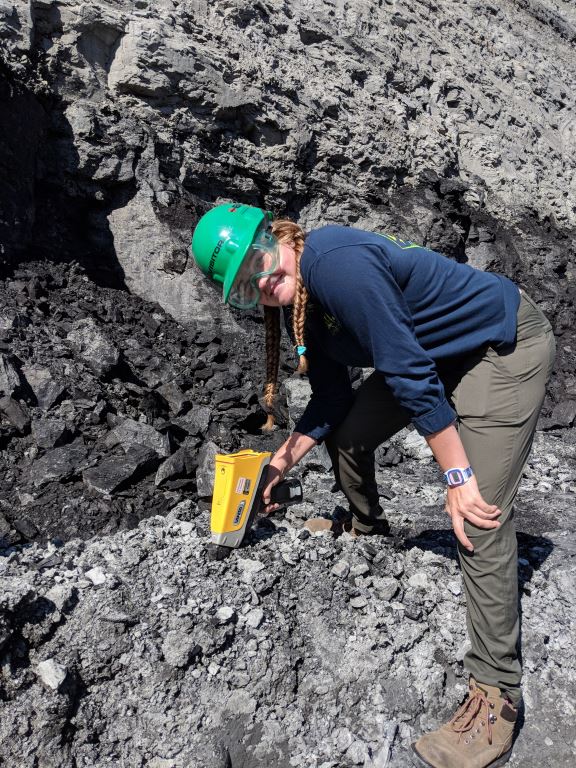 Part of being classified as one of 86 public institutions in the Very High Research Activity (R1) category by the Carnegie Classification of Institutions of Higher Education means attracting some of the best and brightest researchers around the world to come to Texas Tech University.

That also means identifying and recruiting some of the top young research-oriented minds to come to campus as undergraduates or graduate students. Julia Kagiliery could be one of those.

Before she gets to college, however, the junior from Jacksonville, Florida, already is getting a taste of what it is like to be an accomplished, published researcher through her work with Texas Tech faculty member David Weindorf. Together, along with the help of other researchers across the U.S., they have published a paper in the International Journal of Coal Geology where they combined optical and X-ray methods to quantify lignite sulfur content in coal.

"It is absolutely amazing to be publishing so young," said Kagiliery, a 16-year-old honors student at the Episcopal School of Jacksonville. "I think young people are often dismissed because of their age in all fields of study. There is some sort of belief that young people, especially young women, are less qualified for projects like this.

"I am so thankful for all the people that helped me in this project, because they really believed in me. This is a really special thing for me, and it serves as a testament to the power of hard work and tenacity. Dr. Weindorf always says, 'You have greatness within you, know it, grow it, show it.'"

Weindorf, an associate vice president in the Office of Research & Innovation and a professor and BL Allen Endowed Chair of Pedology in the Department of Plant and Soil Science in the College of Agricultural Sciences & Natural Resources, saw Kagiliery's passion for research and her drive to succeed when she first reached out to him about a previous high school science project.

"My research team and I have been working with proximal-sensor application development for well over a decade," Weindorf said. "We are widely considered international authorities in such analysis. The lignite project has been one that I've had on my mind for several years, but I had never had the right opportunities develop to bring it to fruition.

"Truthfully, this type of research is highly novel."

A nose for research

This is not the first time Kagiliery has displayed an interest in science or research into current environmental issues.

As a sophomore, for her high school science fair, she conducted a study on the phytoremediation of soil contaminated with motor oil by examining the sea oats that grow along the beach. It was a project inspired by her love of the beach and her recollection of the damage done to Florida's beaches in the wake of the 2010 Deepwater Horizon explosion and subsequent oil spill.

It was through this project that she connected with Weindorf, having read his paper on petroleum detection in Alabama in connection with the Deepwater Horizon spill. She flew to Lubbock to work with Weindorf and the visible near infrared (VisNIR) spectroscopy technique of proximal sensing.

It was during this time the two began discussing other sensors that could be used and other materials that could be tested. Given Weindorf's work in proximal sensor application and the lignite project that had yet to be developed, using the techniques on coal became the natural fit.

"I sent more emails than I can count to researchers all over the country, and I got maybe four replies. Dr. Weindorf was the first and only researcher who consistently replied to me and seemed to genuinely be interested in my research," Kagiliery said. "He supported my interests and directed my ambition to create the best backyard science project we could."

The project examined novel ways to determine the sulfur content of lignite coal, using VisNIR as well as portable X-ray fluorescence (PXRF) spectrometry and optical sensors such as NixPro, all of which are relatively new and display data in different ways, but that Weindorf says are rapidly gaining acceptance worldwide for a number of applications.

PXRF involves the use of low-power X-rays to identify different elements within the matrix of a substance, such as soil, coal, water or vegetation, within 60 seconds. It reports approximately 25 different elements simultaneously. NixPro is a small, diamond-shaped color sensor with integrated LED light sources operated by a Bluetooth-connected mobile phone application. The LED light flashes and unique numeric color codes are transmitted back to the phone. Researchers determine the content of a material by what colors are shown.

But before any lignite coal examination could be performed, the samples had to be gathered.

Weindorf contacted colleagues in North Dakota to gain access to active coal mines and began assembling a team of researchers to assist in the project, including plant and soil science doctoral candidate Autumn Acree and senior Cynthia Jordan.

Kagiliery and the others took samples from four different mines in North Dakota and collected 250 samples over a two-day period. Utilizing the laboratory of Eric C. Brevik at Dickinson State University in Dickinson, North Dakota, Kagiliery ground, dried, labeled and sub-sampled each sample, shipping a few grams of each sample to the lab of collaborator Nicholas Jelinski at the University of Minnesota and the rest to Weindorf's lab at Texas Tech.

A few weeks later, Kagiliery flew to Lubbock where she spent the next two days scanning every sample with the VisNIR, the NixPro and the PXRF, trying to discover which one, or which combination of methods, can best predict the sulfur content of the lignite coal.

"A truly growing area of innovation in materials characterization is combining multiple data streams and advanced, machine-learning algorithms to predict the parameter of interest," Weindorf said. "My research team has successfully done this in many applications for soil. Coal was a logical next step. Already, we have one awarded patent, and four others in process, disclosed with the Office of Research Commercialization at Texas Tech. Together, they form a portfolio of related technologies that are actively being marketed to companies worldwide. Our technologies are so novel, we are currently working with NASA to use such approaches in enhancing the data being returned from the rover on Mars."

In creating a model to determine sulfur content utilizing all the tools, Kagiliery used 75 percent of the samples to calibrate the model and the remaining 25 percent to check the model's accuracy. She worked side by side with Somsubhra Chakraborty of the Indian Institute of Technology-Kharagpur, one of Weindorf's closest collaborators, to evaluate several different statistical models for using the collected data.

From all the data gathered and analyzed, it was determined that a combination of the NixPro optical sensor and the PXRF data were the most successful in predicting the sulfur content of the lignite coal, at about 85 percent accuracy, better than either sensor by itself.

"In parts of the country with limited buffering capacity, this can quickly acidify soil, surface water, etc., causing substantive environmental damage," Weindorf said. "What our research has shown is that a field-portable, hand-held instrument has the capability to accurately measure the sulfur content in lignite coal. While our project was conducted in a laboratory to carefully control all variables for scientific study, the equipment used is field-portable and easily could be adapted for field use. Thus, the use of such technology in real time for rapid analysis of coal, in active mines, seems plausible."

Kagiliery will enter college in two years already with a leg up on her classmates – in fact, ahead of most of her peers in the U.S. She is a published scientific researcher.

This project appears to be just the beginning. She continues to collaborate with Weindorf on ideas for future projects by utilizing their versatility to examine problems both in the distance and close to home.

One thing is for certain: having completed this project and published its findings only solidifies her desire to pursue science. Six months ago, Julia said her desire was to be a medical doctor. Having worked on this project, however, she is strongly considering becoming a doctor of a different sort – that is if NASA or the Environmental Protection Agency don't come calling first.

"I've always known that I wanted to go into science, but that goal has always felt so far away," Kagiliery said. "I never really put much thought into what being a scientist actually looked like. This experience has shown me what it's like to do real science, and that I don't have to wait until I've graduated to start making an impact.

"This certainly has shifted my career goals to be more research- and publication-based. It also has introduced me to a new field of science. I always knew I enjoyed chemistry and biology from my classes at school and textbooks, but I've found a recent love of environmental science. It's certainly opened my eyes to the depth and possibilities of my future."

"My past teachers and Dr. Weindorf have taught me about the value of people in my education," Kagiliery said. "When I think about how I got to be the researcher and student that I am, I am struck by the people who have supported and encouraged me along the way. Dr. Weindorf has been one of the most influential people for me in that respect. I am looking forward to continuing my research, wherever it takes me, including Texas Tech. As a junior, I still have some time to consider my options, but Texas Tech is high on my list."