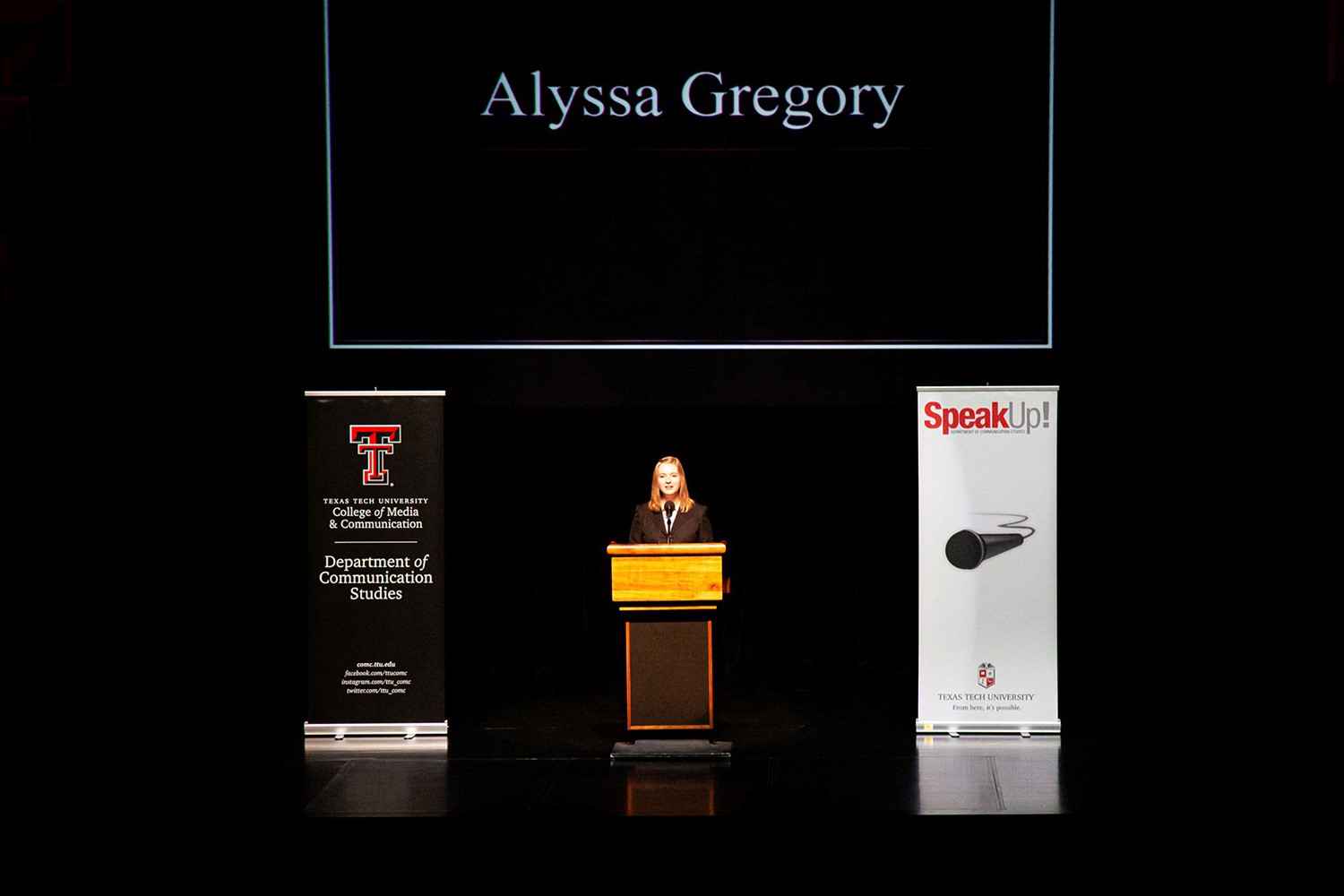 The contest brings together the best oral communication students from public speaking, business and professional speaking, and speaking for business.

As Texas Tech University students were wrapping up the fall semester, those enrolled in oral communication courses had the chance to showcase what they learned during their classes in the biannual SpeakUp! contest.

This year, approximately 2,000 students were enrolled in one of these three courses. The pool of students was narrowed down to 60 to start preliminary rounds, with the top eight making it to the final round at the Allen Theatre in the Student Union Building (SUB).

"This was the best group of speeches overall in my experience with more than two dozen speaking competitions," said Katie Langford, associate professor of communication studies. "All of the students gave a wonderful demonstration of what they have been learning in their oral communication courses all semester. I was very proud of all of their hard work and effort."

The interdisciplinary measures of the competition were on full display this semester, with the two winners and all but one finalist coming from areas outside communication.

Gabriella Ghandour, a freshman political science major, was named best speaker for business and professional speaking. The topic of her persuasive speech was getting people involved in Kindle Hope, a nonprofit she created that serves underprivileged children in Lubbock, specifically through music and art. The competition was a chance for her to bring awareness to the topic as well as showcase her love for public speaking.

"I got to spread my cause to all these people who were in the audience," Ghandour said. "I decided to compete because I knew I would get to spread awareness and people would become aware of the problem we're trying to solve."

While giving her presentation, Ghandour felt as though people were not responding to the speech in the manner she hoped, which left her feeling a little disappointed when she walked off the stage. However, the crowd enjoyed her speech, voting her as the Audience's Choice award winner. This recognition came with a sense of relief for Ghandour.

"I was fulfilled because I thought they hated me, but they actually liked it," Ghandour said. "It made me realize what's in my head is not always reality and that fear shouldn't always be there."

Alyssa Gregory, a senior music major, won best speaker for public speaking. While she enjoyed each phase of the competition, she said the best part was the process of refining her speech from its initial version presented in class to the final product.

"When I spoke at finals, it was a blast just being present in the moment and sharing with others a topic that is important to me," Gregory said. "Winning was affirmation of my progress this semester and of the importance of my topic. Overall, I am incredibly thankful for the experience of participating in SpeakUp!"

Gregory and Ghandour agreed that the contest was a great learning tool because it reinforced what they learned in class all semester, and made them better public speakers. The contest is something everyone, no matter their major, can benefit from, Ghandour said, because it teaches you to speak confidently.

"Everybody needs to know how to communicate," Ghandour said. "One of the biggest issues in our world today is a lack of communication and rhetoric. A competition like this is good because it encourages the practice of saying your point, speaking your truth about your passions and bringing the world together."