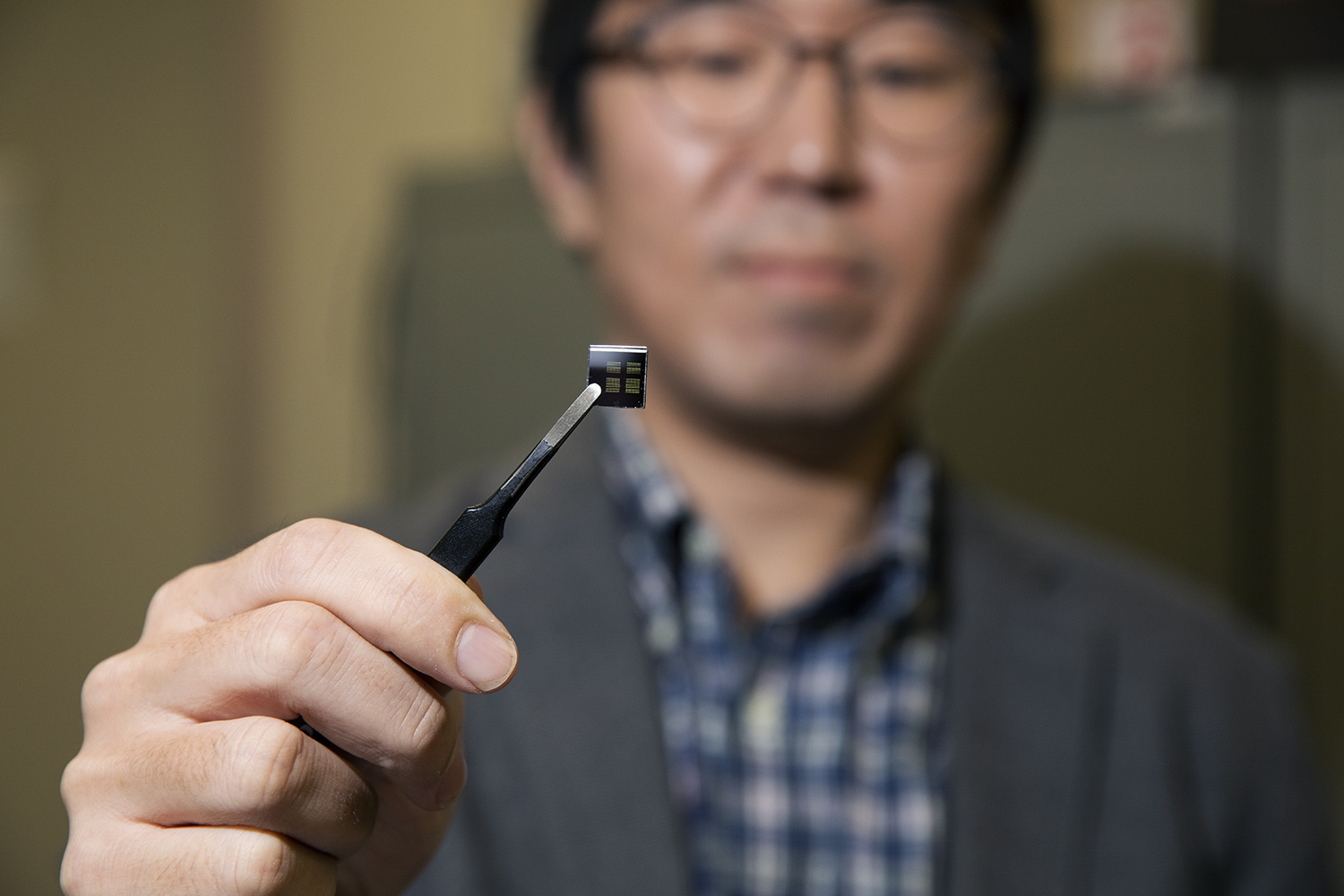 Sangsik Kim, an assistant professor in the Department of Electrical & Computer Engineering through the Edward E. Whitacre Jr. College of Engineering, has received a grant for $357,912 from the National Science Foundation (NSF) to explore all-dielectric metamaterials for high-density photonic chip integration. Metamaterial is an artificially engineered material with an optical property that has not been found in nature before, and all-dielectric refers to optically low-loss material compared to previous approaches with high-loss metal. Integrating these metamaterials into photonic chips is solving many problems in the field and making the chips more functional.

Kim's research focuses on the development of photonic chips and their practical applications.

Part of the challenge is increasing the photonic chip integration density without having the signal interruption between the channel waveguides.

“Photonic chips can make bulky and complicated tabletop optical technology tiny and portable,” Kim said. “If a technology is not portable, then applications can be limited to a lab environment.”

Kim also used the development of computers as an analogous example for photonic chips.

“The early stage of computers in the 1950s used vacuum tubes, which take up large spaces and require huge energy and heat consumptions at a higher cost,” Kim said. “That makes the computer and electronic technologies less than ideal for real applications. In the later 20th century, these issues were resolved with the emergence of semiconductor transistors and chip-scale integrated circuits. This is how computers and many other electronic devices became portable, energy-efficient and low-cost. Nowadays, it's difficult to imagine life without these electronic devices.”

Kim's research proposes to achieve a similar landmark in the field of photonics by increasing the photonic chip integration density. Kim explained three reasons for the importance of high-density integration in relation to the development of the computer technology.

“First, it can have more functionalities if we have a higher chip density,” Kim said. “Second, it could reduce the unit cost. The process of creating these devices and integrating them into the chip costs a lot, but if they're smaller, we can fabricate more numbers of devices through one process, reducing the unit cost. The third reason is energy. If a component is smaller, then the energy required to control a signal will be lower. Actually, these reasons are why semiconductor companies are putting a lot of effort into reducing transistor sizes, and the same arguments apply to photonic chip technology.”

One of the greatest challenges associated with high-density chip integration is “cross talk.” Unlike electrons, photons show prominent wave-like properties, making it difficult to miniaturize a photonic chip. As the chip size reduces, the evanescent waves associated with photons become larger, causing the waves to leave their intended channels and interrupt other signals. This phenomenon is called “cross talk.”

Metamaterials will help counter this problem.

“We recently came up with an idea of using highly anisotropic metamaterials to reduce the cross talk without comprising the device size and optical loss,” Kim said. “Unlike previous approaches of using metallic metamaterials or plasmonic nanostructures, which cause huge optical loss, we propose to use all-dielectric metamaterials, which intrinsically have low-loss operation. Our initial proof-of-concept demonstration showed 30 times reduction in waveguides cross talk compared to conventional waveguides, and we found a new mechanism to compensate for the waveguide cross talk that could result in extremely low cross talk, less than three to four orders of magnitude in an ideal case.”

Kim's initial demonstration on the idea recently was published in Nature Communications and his team is fabricating their devices at the Center for Integrated Nanotechnologies (CNIT) at Sandia National Lab.

For more information about Kim and his research, visit the Integrated Metaphotonics Group website.