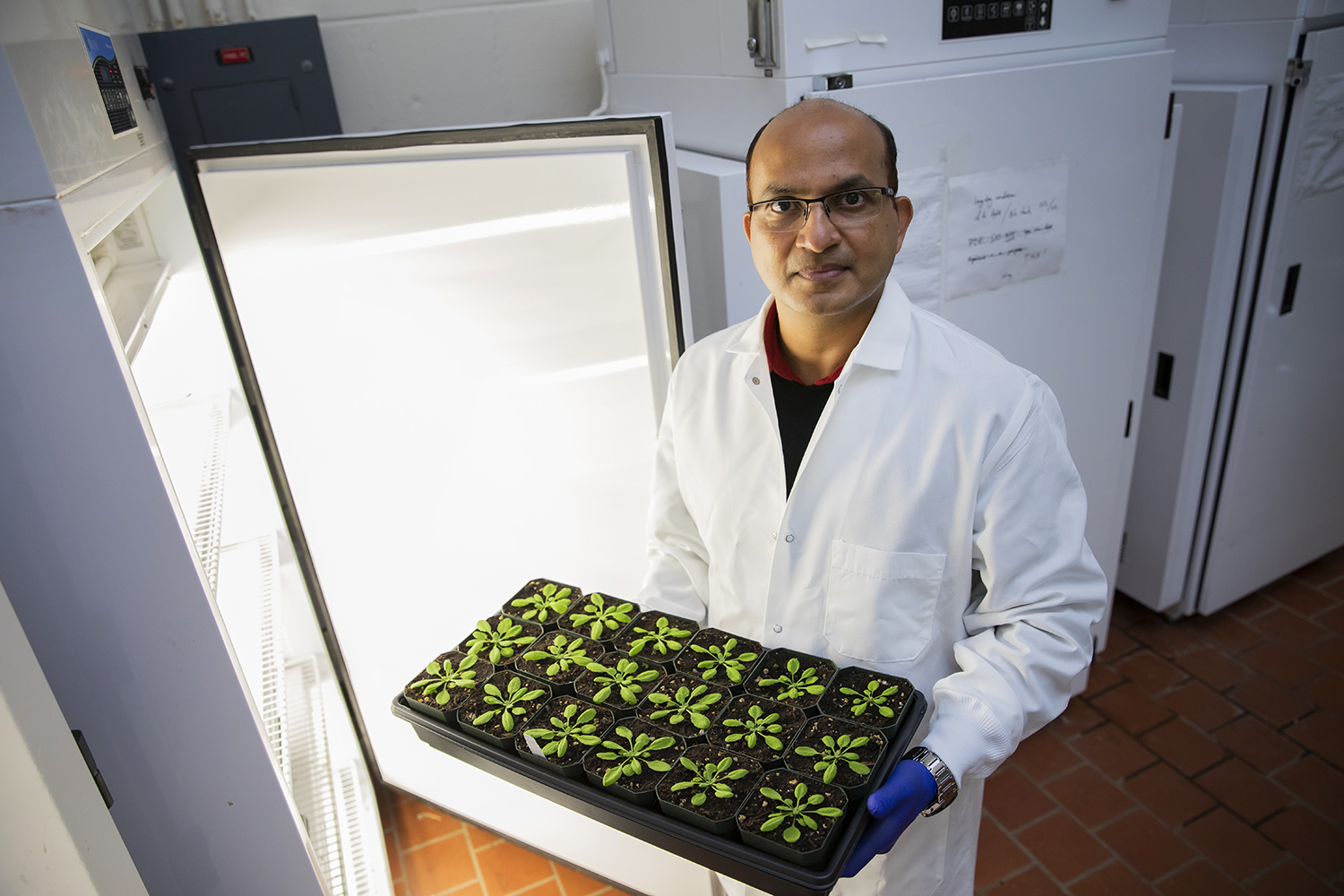 The discovery could lead to improved hybrid soybean seeds, resulting in increases in production of the multi-billion dollar crop.

Since 2000, soybean production in the U.S. has been on a slow, steady rise. Aside from a couple of small dips in production, soybeans have proven to be a productive, economically feasible crop, reaching a peak of 4.5 million bushels produced in 2018.

Production of soybeans has been, and will continue to be, a vital element to the U.S. farming economy, so optimizing the ability for soybeans to thrive and reproduce easily is crucial to their viability. One researcher at Texas Tech University may have unlocked a key element to ensure thriving soybean production, and it involves making sure at least one part of the soybean remains sterile.

Venugopal Mendu, an associate professor of cell wall biology in the Department of Plant and Soil Science within the College of Agricultural Sciences & Natural Resources, led a research team that has isolated the gene and genetic mechanism behind a male-sterile line in soybeans that was first identified at Iowa State University in 1973.

The reason for the male sterility was unknown, until now. Thanks to the work by Mendu and his collaborator, Devinder Sandhu from the United States Department of Agriculture-Agriculture Research Service in Riverside, California, who for the first time used map-based cloning to identify the gene causing the sterility in soybeans, scientists now could help farmers by creating and perfecting more fertile hybrid seeds, which would increase soybean production in the future.

"The soybean is a self-pollenating legume crop," said Mendu, a member of the Texas Tech Fiber and Biopolymer Research Institute. "To make a cross between two varieties, you have to manually remove the male reproductive organs like the pollen-producing anthers from one variety, then bring in male pollen from another variety.

"We need male-sterile lines so they don't produce the fertile pollen. If you plant another variety next to it, and you have bees or other pollinator insects that fly from flower to flower and initiate the fertilization process, then it is very easy to produce a hybrid seed."

Mendu said maintaining homozygous genetic male-sterile lines of soybeans, where both copies of genes mutated, is not feasible because they do not produce fertile pollen and therefore do not produce seeds. Heterozygous lines, with one functional gene and one mutated gene, are best for hybrid-seed production. However, the heterozygous line produces mixed progeny, some fertile and some sterile.

Identification of the gene and the mechanism that leads to male-sterile lines will allow researchers and producers to create and maintain the desired male-sterile line by removing the male-fertile plants early during the seedling stage.

"When we really identify the gene, the mutation, we can develop molecular markers, and when they are in the seedling stage, we can identify and remove the male-fertile plants," Mendu said. "We don't need to wait until they start producing pollen and pods. That eliminates a lot of the pollen contamination problem, and you have a variety that you want to cross. You have all these male-sterile lines, so it's easier for identification and removal."

When researchers at Iowa State discovered the soybean mutant lines in 1973, they identified 11 male-sterile, female-fertile mutant lines and mapped them onto various soybean chromosomes. But the genes responsible for the male sterility were not isolated.

Using molecular markers on each of the 11 lines, regions of the chromosomes were reduced until the sterility-causing mutation was discovered on the fourth line, or ms4.

"Once we mapped and identified the gene responsible, the next thing was how to confirm it," Mendu said. "You are just using molecular markers to narrow it down, and you find a little mutation there and say that it is the one responsible. But that's not good enough."

Normally, scientists would isolate the gene, remove it and replace it with a normal gene in order to confirm the mutation. But Mendu said that takes too long with soybeans. He used a plant called Aribidopsis, which has a similar mutation in the same gene as the soybean.

Mendu took that soybean mutation gene and put it in the Aribidopsis, and it resulted in the male-sterile line present in soybeans, thus confirming that gene is the one responsible for male sterility. Discovering the gene responsible is just as important and significant as the method in which it was discovered.

"There have been 11 male-sterile lines identified so far, but this is the first time the gene responsible has been mapped and characterized using map-based cloning," Mendu said.

From research to production

By identifying the gene and the mechanism responsible for creating the male-sterile line, producers now have the ability to increase soybean production by planting those lines next to female-fertile lines and creating desired hybrid seeds.

The ability to create hybrid seeds is crucial in perfecting the right line of seeds. It gives producers the ability to combine characteristics, such as disease resistance and high yield, into one hybrid line.

The ability to create these hybrids is not limited to just soybeans. Mendu said the same can be done with rice and other self-pollenating crops, both edible and non-edible.

"Now I know this is a plant homeodomain (PHD) protein mutation that binds to a specific region of the gene," Mendu said. "So someone who is working on rice and wants to develop a male-sterile line can use this information to identify the gene, the PHD gene in rice, then mutate it and produce a hybrid. So, it can be applied to other processes."

For Mendu, though, this is just the beginning. Now, he will begin the process of discovering the complete molecular mechanism that causes the gene mutation.

"What we know at this point is that it is interfering with the chromosomal segregation," Mendu said. "But eventually, with the mechanism, we want to know how is it making the pollen sterile? Then, how exactly are these proteins functioning?"