Brazilian Visitors See What College of Engineering Has to Offer 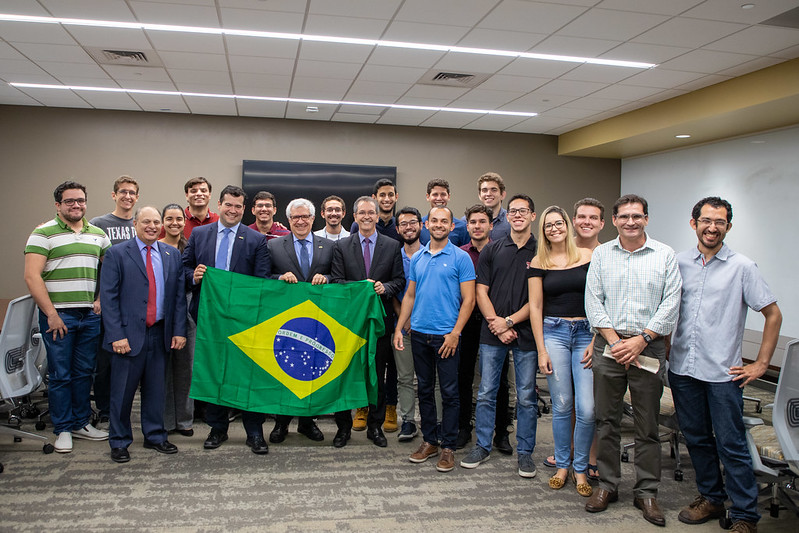 Texas Tech University was the group's final stop on their tour of engineering programs in the U.S.

Luiz Loureiro, executive director of the Brazilian Fulbright Commission; Mauro Rabelo, director of international affairs from the Brazilian Federal Agency for Support and Evaluation of Graduate Education; and Leonardo Nardon, a public affairs official who handles issues in higher education for the U.S. Embassy in Brazil, toured the College of Engineering for ideas on how to modernize undergraduate engineering programs in Brazil.

During their visit, the guests were provided a presentation by Al Sacco Jr., dean of the College of Engineering, on how the college is modernizing the engineering education with a hands-on approach combined with theory from the classroom. They also met with Texas Tech President Lawrence Schovanec and Provost Michael Galyean to discuss their goals during their trip to Texas Tech.

The group visited eight other universities in the U.S., including Harvard University, the Massachusetts Institute of Technology and the University of Texas at Austin. Texas Tech was their ninth and final stop before heading home.

"We were here to discuss the possibility of future collaborations with the Texas Tech campus and Brazil," Rabelo said. "We are having the problem of modernizing our engineering courses, so we came here to learn about Texas Tech and to exchange our experience with Texas Tech to our counterparts."

The Brazilian visitors also met with the chairs of each engineering department, visited the National Wind Institute and the Morrow Energy Pilot Plant and met with Brazilian graduate and undergraduate engineering students.

Spoth further commented that Texas Tech should see important growth in the number of students, both undergraduate and graduate, from Brazil and Latin America in the upcoming years.

Loureiro hopes to continue the collaborative spirit by having an exchange program between Texas Tech and Brazilian students.

"People are very open to collaboration," he said. "They already have some connections with Brazilian institutions and Brazilian researchers and professors, so it's more a question of increasing the connection with the numbers, having more people coming back and forth. We were very well received here at Texas Tech."