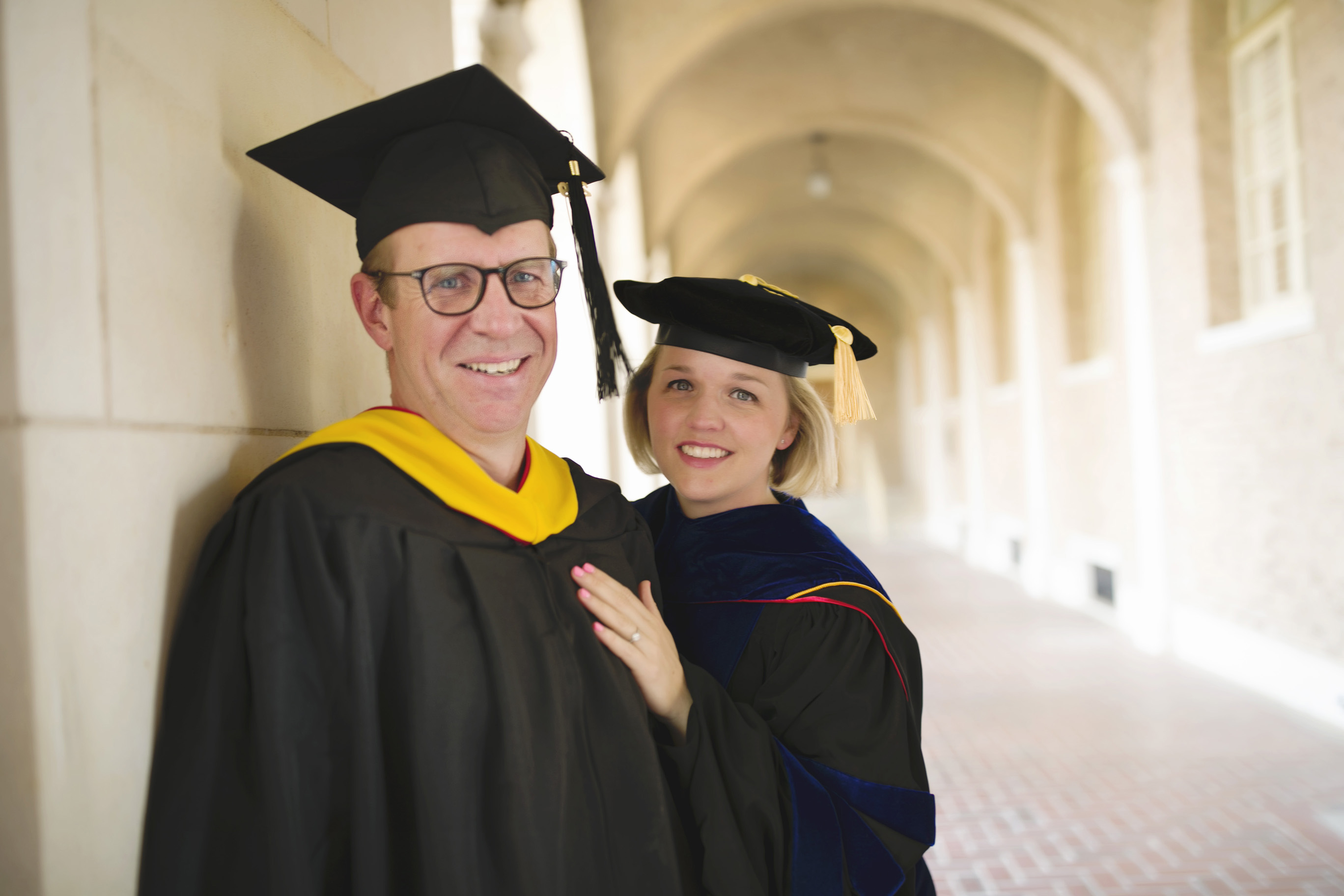 After nearly 10 years as students, getting married and having a baby, Sarah and Jess Schwintz will graduate together on Saturday.

For Sarah and Jess Schwintz, Texas Tech University is their life.

Both were previously married when they got to Lubbock. Now, it's where they work, met each other, raise their children and pursued their education.

Sarah, director of student services for University Programs in the Office of the Provost, and Jess, a senior academic adviser in the Jerry S. Rawls College of Business Administration, fell in love, got married, had a child and are now graduating – all at Texas Tech.

"It just encompasses our entire life. It does, start to finish," Jess said. "It's not just the job we have, but there's more to it."

Their relationship started in 2014 when they were introduced at a Texas Tech Raider Roadshow in San Antonio. Jess was working at a table for transfer admissions and Sarah was representing University Studies. They had a mutual friend who was working the table next to Sarah and, in casual conversation, asked her how the dating scene was going. When Sarah told her not great, her friend said she knew just the guy for her.

Fast forward almost five years to 2019, and Sarah and Jess are achieving another milestone together. After nearly 10 years of being students at Texas Tech, and a marriage and new baby in the middle, the couple will walk across the stage during the same commencement ceremony on Saturday (Aug. 10), something they both call a dream come true.

Sarah will graduate with a doctoral degree in higher education research from the College of Education. Jess is finishing his master's degree in interdisciplinary studies with concentrations in communication studies, educational leadership and higher education from the Graduate School.

With Sarah working predominantly with nontraditional students and Jess with business students, their paths don't cross much professionally. But they do pop into each other's office occasionally, with Sarah going to the Rawls College for birthdays in Jess's office and Jess making his way to Drane Hall for Sarah's monthly potluck.

Their love for the university extends past working on the same campus. When it came time to propose later in 2014, Jess knew he wanted to incorporate Texas Tech somehow. The natural choice was Carol of Lights®, the university's annual celebration of the holiday season, held the first week of December. But he wanted something more private than an event he knew all their Texas Tech friends would be around to watch.

Instead, he created his own smaller version of the event in his backyard a few weeks early, something the two could share with just each other.

"Ultimately it was extremely private for me just to experience that with her," Jess said. "That why I just did that little Carol of Lights® at the house with her."

People they each work with in student services and admissions on campus know them for their love of all things Texas Tech and each other. It seems only fitting, since their relationship started, in part, thanks to a Texas Tech colleague.

"They know of us as a Texas Tech love story," Sarah said. "I think a lot of people are happy for us."

When they first started dating and got married, Sarah was two years into her doctoral degree. Jess had started his master's, but stopped in 2008. As husband and wife, they decided finishing their degrees together was something they wanted to make a priority.

"You want to have the same values and you want to be going on a journey together in life, no matter what that is," Sarah said. "Graduate degrees just happen to be what we both value."

They each took one class a semester so they could complete their coursework without any debt with the help of the Employee Tuition Assistance Program. Because both of their degrees have a College of Education tie, some semesters, that one class was taken together.

For some people, taking a class with a spouse might add an extra layer of pressure. But for Sarah and Jess, it was another way to share their values and support each other.

"It was sort of a built-in cheerleader, because you had somebody who was going to not only hold you accountable, but also encourage you," Jess said.

Originally, the plan was for both to finish in December. But because of the support she got from Jess allowing her to write, read and research over the weekend, Sarah quickly realized she was going to finish early.

She was now on track to graduate in August, and Jess was supposed to have an internship in the fall that would put him finishing in December. But they wanted to walk the stage together.

When Sarah asked Jess if he would be willing to take a summer class and finish in August, he agreed.

"I couldn't have done it without her," Jess said. "And I know we were working for something, too, because our last courses were this summer, and we knew it was all going to come to a head in August. So there was no stopping us."

They will still graduate together, in the same afternoon ceremony even, just a few months earlier than originally planned. And they will have family in attendance from across the country.

"It's as special as renewing your vows, really. That's how meaningful it is," Sarah said. "We both believe in student success. We love helping students succeed at the university, and we're being role models for our students we help by getting advanced degrees."

When Sarah and Jess got to Lubbock and started their time at Texas Tech, both said they were impressed with the hospitality and "niceness" of everyone on campus. There was an undeniable family atmosphere that drew them each in.

Every weekend Jess had his daughter, Ainsley, the two were at Red Raider sporting events. Softball, football, basketball, volleyball, she loved them all and wanted to go to everything.

Sarah and her son, Connor, were the same way. From sports and community events to even the occasional class, he was always on campus with her.

In 2017, Sarah and Jess added another member to their family — a little girl named Hannah. Though she is only a toddler, Hannah is already a Red Raider.

She, like her older brother once did, attends the Child Development Research Center (CDRC) daycare as a Mini Matador and will be in the Double T class this fall.

"We love the CDRC because she becomes engrossed in the culture," Sarah said. "They take the Bye Bye Buggy out, and she gets to go all over campus. We'll watch the band play and have picnics. We do everything they do."

Ainsley wants to be a doctor, Connor wants to test video games, and they both want to attend Texas Tech when the time comes. They're all looking forward to adding new Texas Tech traditions to the family as Hannah gets older as well.

"Texas Tech does so much that involves family," Sarah said. "The homecoming parades, Carol of Lights®, I think of the other events that we go to. They're so inclusive of families in the community."

Five years ago, before Sarah and Jess started their relationship, neither of them could have imagined they would be where they are now.

From finding love again and getting married, to having a child and finishing degrees, Sarah and Jess said they are firm believers that from here, it's possible.

"All of these things are dreams that have come true," Jess said. "So now all we have left is to dream more dreams."