Biology Graduate: Undergraduate Research Work Made All the Difference 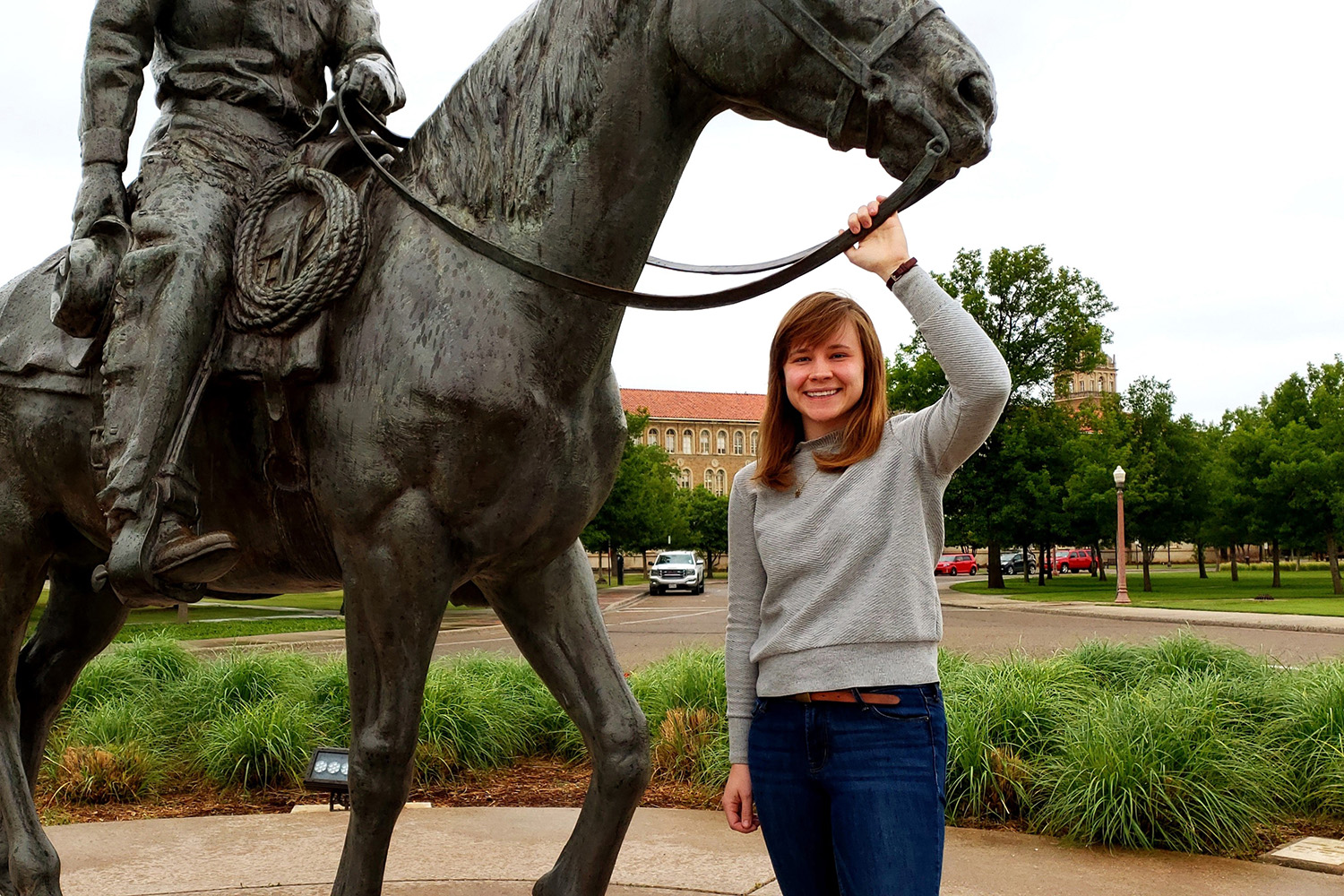 Sarah Miller’s passion for the science behind insulin production is leading her to graduate school at the Texas Tech University Health Sciences Center.

Twelve months ago, Sarah Miller was finishing her junior year at Texas Tech University. As a biology major, she had envisioned becoming a research technician, slowly working her way through a master's degree and maybe going for a doctorate one day.

Just one year later, Miller – now a graduating senior – has been accepted into the doctoral program at Texas Tech University Health Sciences Center (TTUHSC) in the Graduate School of Biomedical Sciences. She starts there this summer.

Miller's dedication to research led her to receive the 2019 Outstanding Undergraduate Researcher Award. She studied how cells regulate the production and distribution of secretory proteins, especially insulin. Her research was conducted under the direction of Andrey Karamyshev, assistant professor in the Department of Cell Biology and Biochemistry at TTUHSC, and the award was presented April 25 during Discoveries to Impact Week.

"When you eat a meal, your blood-sugar levels rise and your pancreas will secrete insulin," Miller said. "I study how the cell makes the insulin."

Insulin is synthesized, or produced, only in the pancreas by highly specialized cells – assuming everything is working properly. In type 1 diabetes, an autoimmune disease, those specialized cells are destroyed and cannot produce insulin. In type 2 diabetes, the pancreas may not produce enough insulin or the cells that need it may not be able to take it in. Both conditions open the door to a host of other health problems. Finding the root causes could stop the disease process before it gets started.

"The thinking is that, in some cases, people can have mutations in the gene for insulin," Miller explained.

In this scenario, pancreatic cells might be able to recognize a defect in the insulin at the beginning of its synthesis, she said, and thus halt its production. In this way, the cell would avoid expending resources on making something that won't be functional.

"We think that is what is going on, but we have to get evidence for it," she said of her research in Karamyshev's lab.

Miller's interest in insulin research extends to staying in touch with the work of other scientists.

"There is another lab at the Health Sciences Center where they are trying to engineer a special kind of immune-privileged cell, called a Sertoli cell, to produce insulin. The idea is that you might transplant them into a patient and the patient's immune system won't destroy them," Miller said of the work being done in the lab of Jannette Dufour, professor of genetics and cell biology at TTUHSC.

She said one of Dufour's current projects is to transplant some of these immune-privileged, insulin-expressing Sertoli cells into diabetic mice, then run tests for the long-term feasibility of this therapy.

"Of course, in order to get other special types of cells to synthesize insulin, you need to understand how insulin gets made in the first place," Miller concluded. "That's the more direct application of our more fundamental studies."

The courage to choose science

Miller is confident in her accelerated science, technology, engineering and mathematics (STEM) career path now, but that wasn't always so. She had to face self-doubt and overcome it.

"When I was a high school senior, I did well in STEM classes but also reading and writing, so it was difficult for me to decide which one to pursue, at first," she said.

She made good grades in high school and did well on her ACTs – high enough in both areas to receive some very attractive scholarships. But as an incoming freshman, Miller found herself up against classmates who came from high schools with a heavy concentration in science and math.

"Their level was so beyond mine when I first started out that it was definitely intimidating," she remembered. "I was getting really put off from pursuing science because I was determined to be the best. And I said, 'I'm already so far behind I shouldn't even pursue biology, even though I love it.'"

But she didn't give up on herself. In time, she came to see that, even in a highly competitive field, she was better off following her own curiosity than falling prey to endless comparisons with peers.

"Curiosity is what drives me throughout my studies, and that's what helps me perform on tests even though I come from behind," she said. "At a certain point you ask yourself, 'What do I want my life to contribute to, to mean?' All these other people's opinions don't matter. I can say I'm not going to be intimidated any more by how smart people appear to be because I know I've been able to accomplish things and have done well in really hard classes. And I really like what I'm studying."

Her advice for other students struggling with doubts is to ask themselves one question.

"'Are you true to yourself and what you want to do?' I think that is where that inner perseverance comes from," she said. "I think it's important to know what that is."

She thinks that's how she landed the undergraduate research award.

"I didn't join a lab just so I could show it on my resume," she said. "I was reading papers of professors and found one I was interested in, and I emailed him. I said, 'Hey, I'm interested in your research. Can I talk to you about it?' And he said, 'Yeah, come on by.'"

It wasn't long before Miller became curious about other avenues within that research. She asked if she could pursue those avenues, then followed through. That, in turn, led to the winning research project.

"I just keep asking, 'What is interesting here?' Or I'll have questions about what I'm listening to in lecture, what's going on in lab," she said. "I love the lab work and being able to see something for the first time that nobody else has seen, or solve maybe a little piece of the puzzle and confront some of the assumptions and biases that we have as we go along. That's just the process of science. And I love that."

Miller is thankful for the resources and donors that make undergraduate research possible at Texas Tech. The College of Arts & Sciences' Dean's Fund for Excellence, for instance, allocates money for additional equipment and provides for students and faculty to attend academic conferences. The Center for the Integration of STEM Education & Research (CISER) funds the hiring of undergraduate and graduate students to work in the labs of Texas Tech's top research professors, thus allowing CISER students to earn an income on campus in their intended field while conducting professional-level research, presenting their research findings in professional settings and publishing their work.

"For some students, it's really helpful to do undergraduate research and get paid for all the time that you're putting in because you are working at the same time that you are going to college," Miller said. "So any program where you can financially support undergrad students to do research is really cool."

She also admires the professors who allow undergraduate students into their labs.

"If you think about it, they are taking on a liability – somebody who potentially doesn't know anything about research techniques or people who don't know what they want to pursue," Miller said. "Even then, these professors are helping students grow and think critically about science and other learning. Having programs to support that is just so important for students. My life has changed because of it."