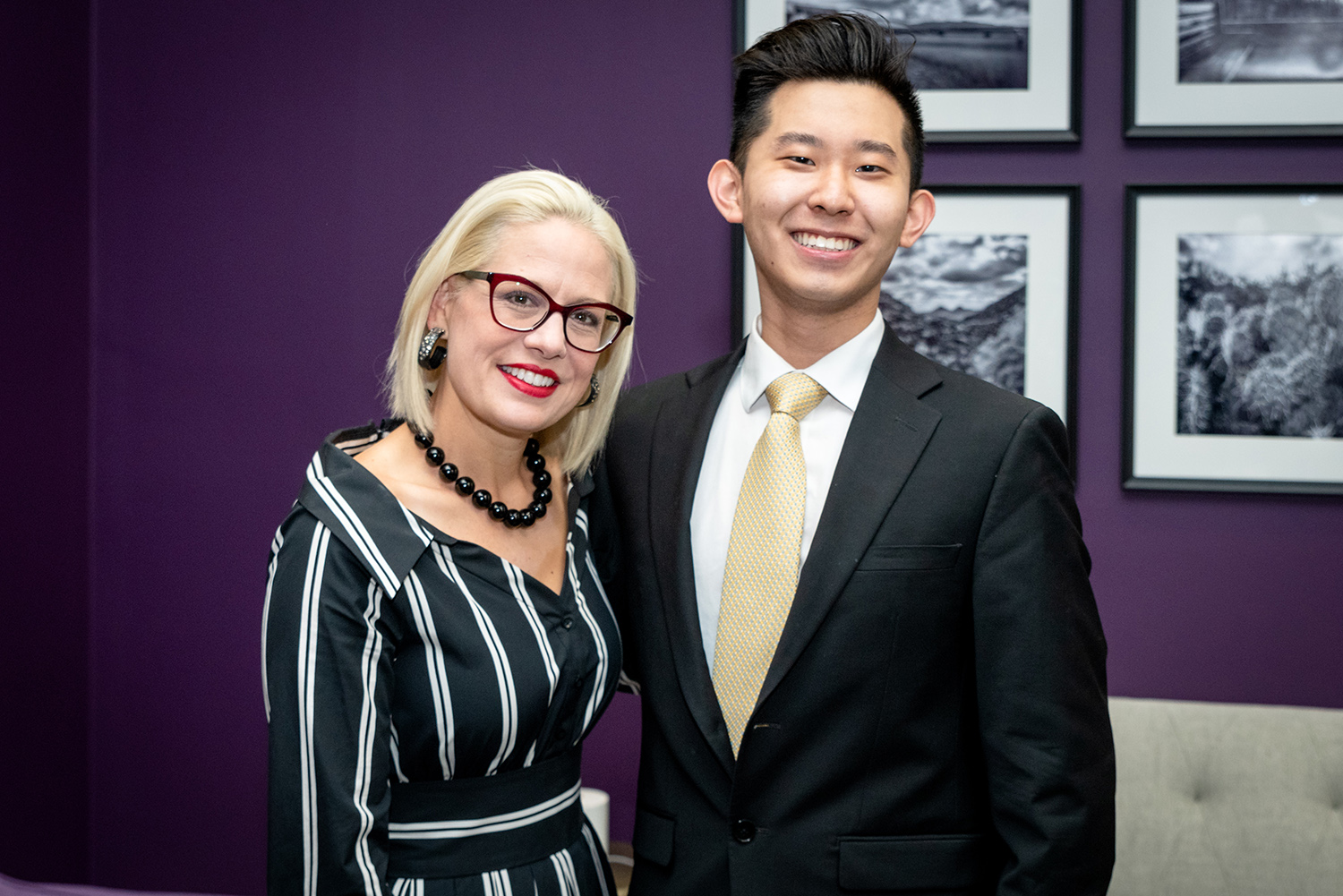 High school is a time of extracurricular activities, SAT preparation and personal growth. Oscar Wu, a junior Honors College student majoring in cell and molecular biology in Texas Tech University's College of Arts & Sciences, used his time in high school to pursue an alternative route – his love of research.

"I started conducting research when I was a sophomore," Wu said. "I emailed 50 laboratories when I was 15 years old, and I was accepted into only one, at the University of Texas Health Science Center at Houston. After that, everything was history."

That internship grew Wu's passion for research, and he continued working on projects throughout high school and college. His work has paid off in a big way. After receiving help with his application from Wendoli Flores, the director of the National and International Scholarships & Fellowships Office in the Honors College, and with such a compelling history and story, Wu was selected as a Goldwater Scholar.

"Oscar Wu is an excellent scholar with numerous research experiences and publications under his belt," Flores said. "He began his research journey in high school at a young age and can best be described by his proactive nature and fearless pursuit of research opportunities. Although there are various selection criteria reviewers take into consideration, I believe Oscar's dedication to research helped him stand out to be competitive for a Goldwater Scholarship. He has worked hard to earn this prestigious honor, and I could not be happier for him."

"This prestigious recognition speaks to Oscar's commitment and talents as an undergraduate researcher and exemplifies the innovative and entrepreneurial spirit we encourage in our students," Schovanec said. "I congratulate Oscar on this well-deserved honor and extend my appreciation to the faculty and staff who play an active role in the education and interests of all Texas Tech students."

As Wu continued his research interests, he became enthralled with examining cancer immunotherapy.

"Whether it's the National Institutes of Health or companies like Merck, there is a huge public and private interest in cancer immunotherapy," Wu said. "In fact, the 2018 Nobel Prize in Physiology and Medicine was awarded for developing the first immune checkpoint inhibitor drug, ipilimumab. This is because decades of basic science research in this field has finally allowed us to utilize that data for drug development and translate them to patients.

"For the Goldwater application, I chose to focus on my projects regarding cancer immunotherapy because it's a revolutionary new field in medicine. My ultimate goal is to become a physician who conducts research and is involved in public policy."

The Goldwater Scholarship Program is one of the oldest and most prestigious national scholarships in the natural sciences, engineering and mathematics in the United States. It seeks to identify and support college sophomores and juniors who show exceptional promise of becoming this nation's next generation of research leaders in these fields.

Named after former Sen. Barry Goldwater, who served his country for 56 years as a soldier and statesman, including 30 years in the U.S. Senate, the Goldwater scholarship awards recipients $7,500 for each remaining year of school.

Much like any esteemed scholarship, the application process for the Goldwater scholarship asks applicants to write a paper showing their vested interest in research and their social competency.

"I mainly wrote about my projects at the University of Texas MD Anderson Cancer Center and Dana-Farber Cancer Institute/Harvard Medical School," Wu said. "At MD Anderson, I evaluated the efficacy of GW-516, a novel small-molecule inhibitor, in inhibiting self-renewal, invasion and metastatic ability of prostate cancer and breast cancer. At Harvard, I designed a project evaluating the effect of deleting the X-Box Binding Protein 1 (XBP1) gene in mice on the cytokines secreted by different subsets of their CD4+ T cells.

"In terms of the leadership aspect, as a freshman at Texas Tech, I co-founded a science, technology, engineering and mathematics (STEM) outreach program that's sponsored by Michael San Francisco, the dean of the Honors College. It's called the STEM & Leaf Corps, and it's aimed toward advancing STEM education for underprivileged, middle school minorities in the Lubbock Independent School District (LISD)."

The idea for the STEM & Leaf Corps began during Wu's freshman year at Texas Tech. With a few of his friends on board, they set out to make an impact in the local community. Since then, the program has grown exponentially.

"Over the course of two years, the STEM & Leaf Corps has grown from less than 10 Honors College students to more than 50 high-achieving undergraduates from all disciplines at Texas Tech," Wu said. "With the assistance of Dean San Francisco and senior honors adviser Chad Cain as our secondary adviser, our outreach has now expanded to Lubbock and Estacado high schools, as well as O.L. Slaton, Hutchinson and Dunbar middle schools. Since fall 2018 alone, we made 1,000 student contacts, impacted more than 300 students and have performed almost 600 total hours of volunteering work in LISD."

The STEM & Leaf Corps has received national recognition as well as accolades from Texas Tech.

"I'm proud to say we won the Best Poster Award for Community Development and Public Service Projects at the 2019 American Medical Student Association's conference in Washington, D.C.," Wu said. "We also received the Outstanding Contributions to the Greater Community Award through Texas Tech's Student Organization Awards this April, none of which would have been possible without our current president, Tingzeng Wang."

Currently, Wu is in Washington, D.C., working as an intern for U.S. Rep. Michael Burgess.

"He's the most senior physician serving in the House of Representatives and a leader in health care," Wu said. "Interning in his office has allowed me to meet a range of leaders in academia, government and the health care industry. Talking to people such as Housing and Urban Development Secretary Ben Carson, a Nobel Prize winner, and the former president of the California Institute of Technology has opened my eyes toward novel methods of serving patients beyond those of pure academia.

"The whole experience has been absolutely phenomenal. Because of this internship, I was even able to meet and take pictures with the two politicians serving on the Goldwater Scholarship Board of Trustees, Congressman John Larson and Sen. Kyrsten Sinema."

Wu also credits his mentors and everyone who's assisted him academically and professionally.

"I'm incredibly grateful to Ronald Phillips and Holton Westbrook, who both work in the Office of the President at Texas Tech, for giving me this opportunity to be in D.C. Without the Texas Tech Congressional Internship program, this experience would have been impossible for me.

"I'd also like to thank Dr. Laurie Glimcher, the president and CEO of Dana-Farber Cancer Institute, who allowed me to intern in her lab at Harvard. To oversee Harvard's cancer hospital while also running a lab is absolutely inspiring. Similarly, I'm also thankful for Congressman Burgess and his staff for giving me a phenomenal experience in D.C. His ability to be the third most-effective U.S. Representative among all 435 members of Congress, in addition to his background as a physician specializing in obstetrics and gynecology, impressed upon me the importance of physicians advocating for health care reform. I think anyone who wants to instigate change, regardless of their major or discipline, should apply for this internship at Texas Tech."