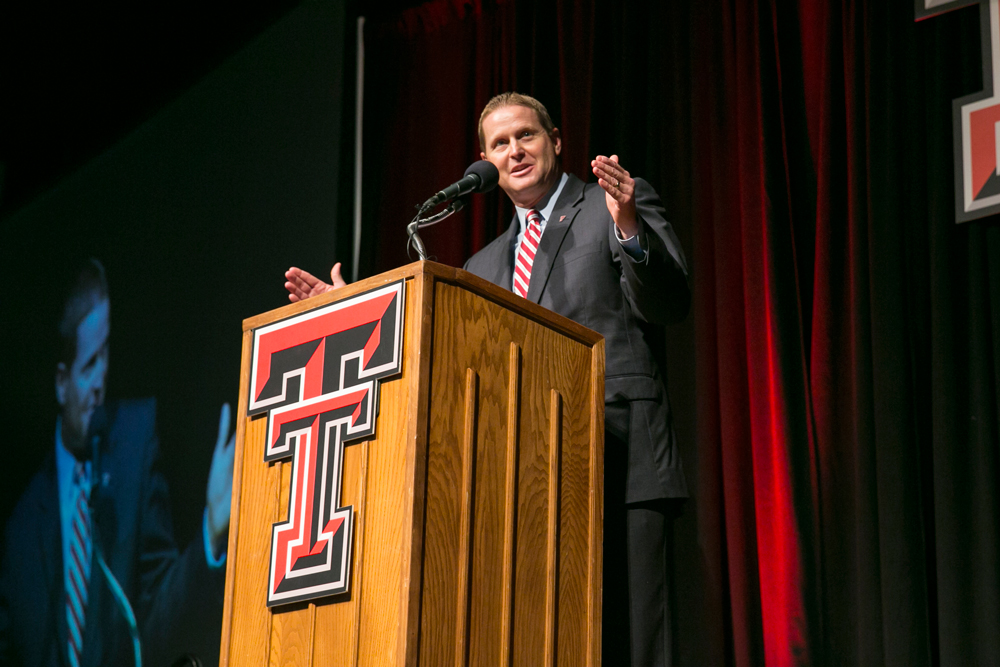 Hocutt has led the Texas Tech athletics department since 2011, during which several programs have experienced unprecedented success.

Texas Tech President Lawrence Schovanec has announced a revised contract for Director of Athletics Kirby Hocutt that includes a two-year extension and an adjustment in compensation.

Hocutt, the 13th athletic director in the history of Texas Tech, is in his eighth season leading the Red Raider sports programs. In his time in charge, numerous programs have experienced unprecedented success and become national powers in several sports, and the athletics program as a whole has seen tremendous growth in facilities and financial support.

"I am sincerely appreciative of the continued trust and support from President Schovanec, Chancellor Mitchell and the Board of Regents," Hocutt said. "Texas Tech University and Lubbock have become home for my family and there is not a greater place. I look forward to continuing our work to elevate Texas Tech Athletics to the top echelon of college athletics."

Details of the contract include an increase in compensation to $1.5 million annually with 3 percent increases each year, beginning September 1, 2019, and an extension to August 31, 2027.

Under Hocutt's guidance, two of the more high-profile programs in Texas Tech athletics have ascended to the national spotlight. The men's basketball team just completed a historic season, finishing the year as the national runner-up after claiming the program's first Big 12 Conference championship. The baseball team has reached the pinnacle of college baseball three times in the last five years with trips to the College World Series and a pair of Big 12 titles in the process. Both head coaches – Chris Beard in basketball and Tim Tadlock in baseball – were hired by Hocutt.

This year, the softball team is in the midst of one of its best seasons in school history, the women's basketball program experienced one of the biggest single-season turnarounds in the nation with the hiring of Marlene Stollings, and the men's and women's track teams continue to complete for Big 12 and national titles in both indoor and outdoor track and field.

The 2017-18 athletic season was one of the best in school history, with six programs – baseball, men's basketball, men's golf, women's tennis and men's track and field (indoor and outdoor) all finishing in the top eight in the country in their respective sports. In all, Texas Tech has claimed 13 Big 12 titles under Hocutt.

"As a result of Kirby's leadership and vision, our athletic programs have enjoyed unprecedented success," Schovanec said. "He has assembled an administrative staff and a group of coaches who reflect his priorities to develop our student-athletes, academically and athletically, while competing at the highest level. His success in fundraising has resulted in impressive improvements in facilities and resources. He is one of the most respected athletic directors in the nation, and we are fortunate that he will continue to lead our programs at Texas Tech."

During his time at Texas Tech, Hocutt also served for three years on the College Football Playoff Selection Committee, the organization responsible for determining the teams that complete in the college football playoffs. He served as chairman of the committee for two of those years.

A native of Sherman who played college football at Kansas State, Hocutt also has been instrumental in upgrading or creating facilities for several athletic programs. Under his guidance, the Campaign for Fearless Champions was created, designed to enhance athletic facilities, invest in athletic scholarship endowments and provide for the future of Texas Tech Athletics. The campaign also benefits the J.T. & Margaret Talkington Leadership Academy, which was created in 2014 to prepare student-athletes for success after graduation.

As part of the Campaign for Fearless Champions, the $48 million Sports Performance Center became a reality, giving the Texas Tech football team its much-needed indoor facility while also creating an indoor track and field facility, which hosted the 2019 Big 12 Indoor Track and Field Championships in February. The campaign also has led to the Dustin R. Womble Basketball Center across the street from United Supermarkets Arena.

Hocutt also has overseen numerous improvements to Jones AT&T Stadium, including the installation of a new FieldTurf playing surface and a new high-definition video board as well as upgraded premium seating on the north end of the stadium.

His success led to Hocutt being honored in March 2018 as the Under Armour Athletics Director of the Year by the National Association of Collegiate Directors of Athletics (NACDA).