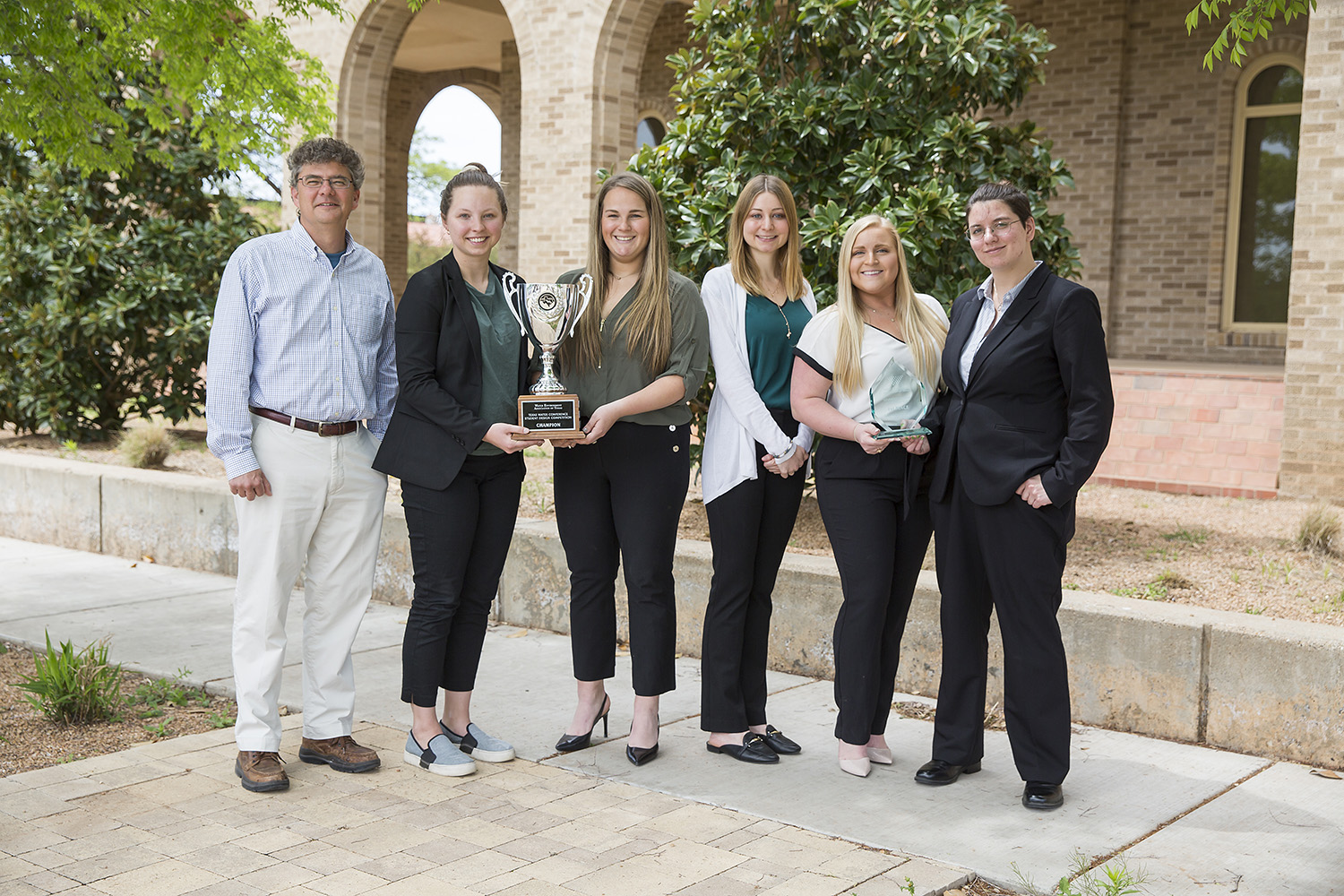 The students won the Water Environmental Association of Texas’ student design competition and will graduate with their master’s degrees this week.

Finals are done. The stress has subsided. Now, it's time for family and friends to descend upon the Texas Tech University campus and celebrate as the Class of 2019 basks in all it has achieved. But before tassels are turned on each graduate's mortarboard, there is time to reflect on the accomplishments of those who about to transition from Texas Tech students to alumni.

For their class, the group was tasked with designing and upgrading the water clarifying system of Bohl's Wastewater Treatment Plant in Bee Cave, Texas.

"Currently, the public utility agency that takes care of this city has two wastewater treatment plants. One cannot expand, and the other one is Bohl's. They have room for expansion, but it's not that much room. So we had to keep the size of the land available into consideration."

The Water Environment Association of Texas (WEAT) has a student design competition at its annual conference. Students have the opportunity to design and present improvements to a real-world wastewater treatment plant.

The Texas Tech group decided they wanted to participate in the 2019 competition, and this year's WEAT prompt also happened to be for the Bohl's wastewater treatment plant in Bee Cave.

"A lot of the teams that competed were really similar to us, but we felt like we had more of an edge because we were so much more familiar with the project," Snyder said. "We had been working on our school project since August, and most of the other teams didn't start until January."

"Texas Tech last won in 2008 and, since then, SMU has won," Haugvoll said. "I can tell you this, when we kicked SMU out of their 10-year run, it felt incredible."

"I'm pretty sure I started crying," Lewis added. "Everyone said, 'You're not going to win because SMU always wins.' And when they were called for second place, we were like, 'Is this real? Am I about to faint? This is a dream.' So, when we were called the winners, there were a lot of emotions."

Along with the bragging rights of taking down a 10-year champion, the group earned a chance to compete at the national competition against the other 49 U.S. states at the Water Environment Federation's Technical Exhibition and Conference (WEFTEC) this September in Chicago.

The team also received a $4,650 check, though those funds will go back toward the university's Society of Professional Engineers (SPE) organization, which is Lubbock's WEAT chapter.

"It goes into the SPE's bank account, but then it mostly helps pay for us to go to nationals," Snyder said. "Any leftover funds help next year's team so they can afford to compete."

Though Texas Tech's five-year master's degree in environmental engineering was the main catalyst that brought the group to the university, their paths were drastically different.

"I started college at the University of the South in Sewanee, Tennessee, on a softball scholarship," she said. "I was an ecology and biodiversity major, so I didn't even want to be an engineer yet. Circumstances brought me back to Texas, and I realized that I'm great at mathematics and science. So I decided to search around for some kind of environmental engineering program. Texas Tech was ranked pretty high and was back in my home state, which was nice. And of course, the five-year program was a great incentive, too."

Lewis had plans to join the Peace Corps after high school before deciding to go to Texas Tech.

"High school Mihna wanted to save the planet," Lewis said. "I was like, 'I'm going to join the Peace Corps. I'm going to save the world and fix all the problems.' I got really invested in it. And my parents said, 'For what you want to do, you have to go to college.' So that's when I picked Texas Tech and the master's program."

Snyder wanted to explore the sea before a conversation with her cousin and a former teacher altered her course.

"I wanted to be a marine biologist forever," Snyder said. "My cousin was a marine biologist in Florida, and I would go there during the summers and work. I would go out on the boat with her, collect samples, go back to the lab and test them. So I was like, 'This is what I'm going to do. I'm going to save the dolphins and the turtles and the oysters.' And my cousin said, 'Katie, it's really good you want to do this, and keep it in the back of your mind, but explore some of your other options.'

"I was in an environmental engineering class my senior year of high school, so it all just kind of all fell together. My professor was an environmental engineer with a doctorate. He told me, 'I think this is what you need to do.' And then I always wanted to come to Texas Tech and be a Red Raider. It just worked out that the university has one of the best programs, too."

When Mason was 5 years old, they attended classes at Texas Tech alongside their mother and fell in love with the campus and the university.

"I'm very lucky to have found the environmental engineering program," Mason said. "It feels like I'm where I need to be."

Once commencement is over, the group will head out on their professional careers.

"I'm going to work for Black & Veatch, an engineering, procurement and construction company," Snyder said. "I'm going to be in their water resources department in Austin, so I'll be doing regional water planning for the State of Texas. My first day is June 10."

Haugvoll also accepted a position with Black & Veatch, but in their Houston offices.

"I've accepted the position of a wastewater/water engineer," she said. "I will start my career mid-June, and I look forward to moving back to Houston to be near my family."

Stegint is moving to Chicago to work for ExxonMobil and Lewis accepted a role with Geosyntec.

"I have officially signed with Geosyntec for a remediation position at their Houston office," Lewis said. "I'm really excited about this new chapter in my life because, in my eyes, this is a career path and opportunity for me to start making a difference. I think this is the beginning for me accomplishing my dreams."

Mason, who will graduate in December, has an internship lined up with the Texas Commission on Environmental Quality and plans to pursue a doctoral degree in the environmental field one day.

"I want to inspire students the same way my professors have inspired me," Mason said.