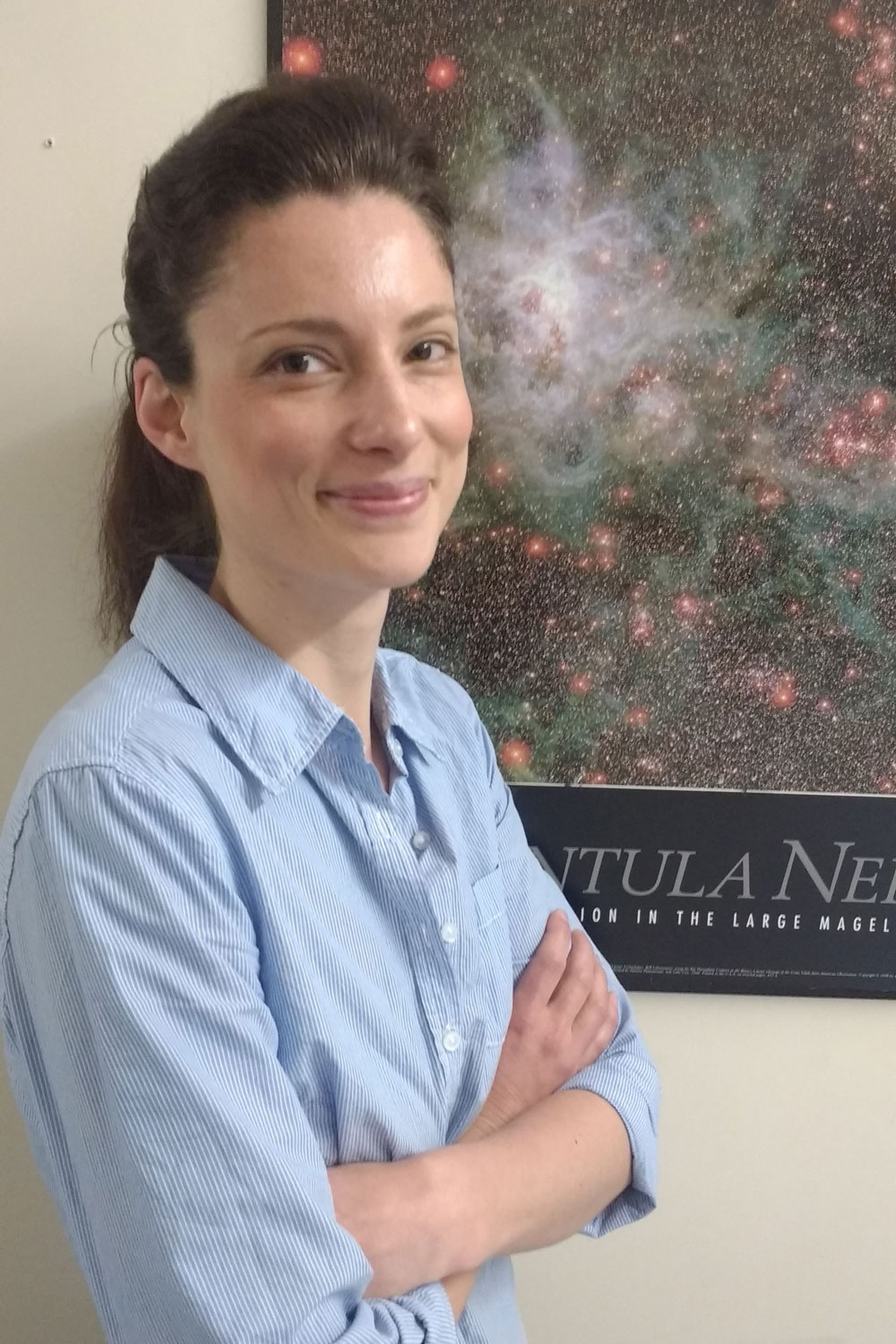 One of the main unsolved problems in astrophysics is to determine the physical mechanisms driving star formation. Texas Tech University researcher Anna McLeod is part of an international team working to answer that question.

A team of scientists led by astrophysicist Diederik Kruijssen from Heidelberg University in Germany has now managed for the first time to reconstruct the time-evolution of interstellar clouds of gas and dust, so called molecular clouds, and the star formation process within them.

Using observations of the spiral galaxy NGC300, the team demonstrated that star formation proceeds very rapidly, yet inefficiently. Most of the interstellar gas is not converted into stars, but is instead dispersed by stellar feedback in the form of radiation and winds. Their analysis shows that molecular clouds are short-lived structures undergoing rapid lifecycles, driven by the intense radiation from the newborn stars within them. This finding shows that galaxies are dynamic systems, like "cosmic cauldrons," consisting of building blocks that constantly change their appearance.

The movie demonstrates that molecular clouds (top right) and young stars (top left) are anti-correlated in the nearby galaxy NGC300. As the video plays, the spatial resolution increases and the ratio between molecular clouds and emission from young stars (bottom left) changes from white (strong correlation) on large scales to bright red and blue (strong anti-correlation) on small scales. The graph in the bottom-right panel quantifies this behaviour. Credit: Diederik Kruijssen & Nature.

To answer which of these models for the molecular cloud lifecycle is correct, Kruijssen and his team combined two different sets of observations of the galaxy NGC300. The first is a map of light emitted by carbon monoxide, which shows where molecular clouds reside. The second is a map of hot, ionized hydrogen, which marks the positions of massive stars that just formed. These maps were obtained with the Atacama Large Millimeter Array (ALMA) of the European Southern Observatory (ESO) and the 2.2-meter telescope of the Max Planck Society and ESO. The ALMA observations were carried out by Andreas Schruba, scientist at the Max Planck Institute for Extraterrestrial Physics in Garching, Germany, and one of the co-authors of the study.

The scientists then analyzed the data using a new statistical method, which determines how molecular gas and star formation in galaxies are related on different spatial scales. For the first time, this method enables scientists to precisely quantify the positions of molecular clouds and young stars relative to one another.

The results left no doubt: molecular clouds and young, massive stars rarely coincide. This effect becomes stronger on smaller scales. The researchers conclude that stars form and destroy their parent molecular clouds very rapidly, such that gas and young stars represent distinct, subsequent phases in the lifecycle of molecular clouds.

"Our results demonstrate that star formation proceeds very rapidly and highly inefficiently," Kruijssen explained. "Molecular clouds in NGC300 live for about 10 million years, and take only about 1.5 million years to be destroyed, well before the most massive stars have reached the end of their lives and explode as supernovae."

Mélanie Chevance, researcher in Kruijssen's team and co-author of the paper, adds, "The intense radiation from young stars disperses their parent molecular cloud by heating them and blowing hot bubbles of interstellar gas. This way, only 2% to 3% of the mass in molecular clouds is actually converted into stars."

McLeod, a postdoctoral research fellow in the Texas Tech Department of Physics & Astronomy who is part of the research team, said while this study examined data gathered in only a single optical wavelength, it lays the groundwork for an upcoming analysis using all relevant optical wavelengths.

"We are now entering the era in which we can map many, many galaxies, near and far, at many different wavelengths simultaneously, via so-called integral field spectroscopy," McLeod said. "We can then apply this new statistical method to these truly huge data sets and systematically understand star formation across the vast galaxy zoo that is out there."

Applying this new statistical method to observations of very distant galaxies will allow researchers to infer how stars have formed throughout the history of the universe.

"We will now proceed to investigate the relation between molecular clouds and young stars in galaxies throughout the cosmos," Kruijssen said. "In the near future, this will allow us to understand galaxies as collections of building blocks that each undergo vigorous, star formation-driven lifecycles and together shape the appearance of their host galaxies."