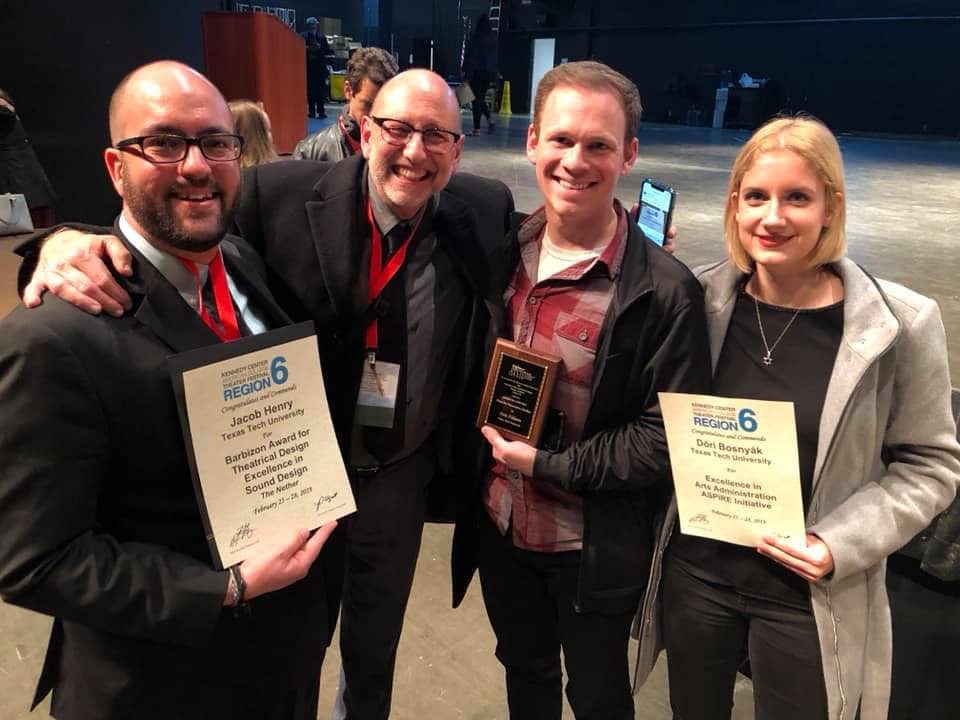 "This represents an extraordinary accomplishment," said Mark Charney, director of the School of Theatre & Dance, who holds national offices in criticism and dramaturgy. "Rarely do you find one school that excels in so many disparate areas. It speaks to the strength of our program and mentors."

At the national festival, Bosnyak will participate in arts administration, Henry in sound design and Weber in the Musical Theatre Initiative. "Black Girl, Interrupted," a new play by Gonzalez, was selected as the national runner-up for the Kennedy Center's Paula Vogel Playwriting Award, which recognizes outstanding student-written plays that explore issues of gender, diversity and sexual orientation. In addition to attending the national festival, Gonzalez receives membership into the Dramatists Guild and the Playwrights' Center of Minneapolis.

"It's a really big honor," Gonzalez said. "KCACTF is like the Tony's of college theater. It's a huge accomplishment. I wrote the first draft in 2017 for a playwriting course. I did a major rewrite last October, and that is the version I submitted to KCACTF."

The play tells the story of an African-American female reporter who is trying to find information on a young African-American Army private who was raped and murdered while stationed in Iraq in 2005, and the reporter's own demons that her investigation forces her to face. Gonzalez said it's a dramatized version of the true story of 19-year-old LaVena Johnson, whose death while stationed in Iraq in 2005 is the focus of the 2010 documentary "The Silent Truth."

"About a year before I wrote it, I saw a clip of the documentary on Facebook," Gonzalez said. "I was intrigued. It had happened 11 or 12 years before, and yet I had never heard anyone talk about it. It just never left me, and I was troubled by it."

"Black Girl, Interrupted" will be the first play performed on Texas Tech's Charles E. Maedgen Jr. Theatre mainstage during the 2019-2020 season. The theater has been closed while construction continues on the expansion and renovation of the School of Theatre & Dance Complex. In addition to workshopping the play at the national festival, Gonzalez said it also will be further developed at the School of Theatre & Dance's annual WildWind Performance Lab this summer.

"That's going to be a big factor on what ends up on the stage in October," Gonzalez said, adding that the feedback she already has received from other students and faculty has made an impact on the play. "Having those responses from the rest of the students has been really beneficial, and the faculty has been really receptive and chose to include it in the season next year, which is amazing."

In addition to Gonzalez, Bosnyak, Henry and Weber, several other students were recognized at the Region VI Festival and will venture around the nation to advance their studies. Graduate student Bill West-Davis will travel to the Stagecraft Institute in Las Vegas for a one-week masterclass for his work in technology and design. He also is the recipient of the National Partners in American Theatre Award, as is visiting assistant professor Ross Fleming who won the Mentor Award. Doctoral student Eric Eidson received the Association for Theatre in Higher Education (ATHE) Prize for Innovative Teaching and will travel to the ATHE conference in August in Orlando.

A complete list of recognitions can be found here.