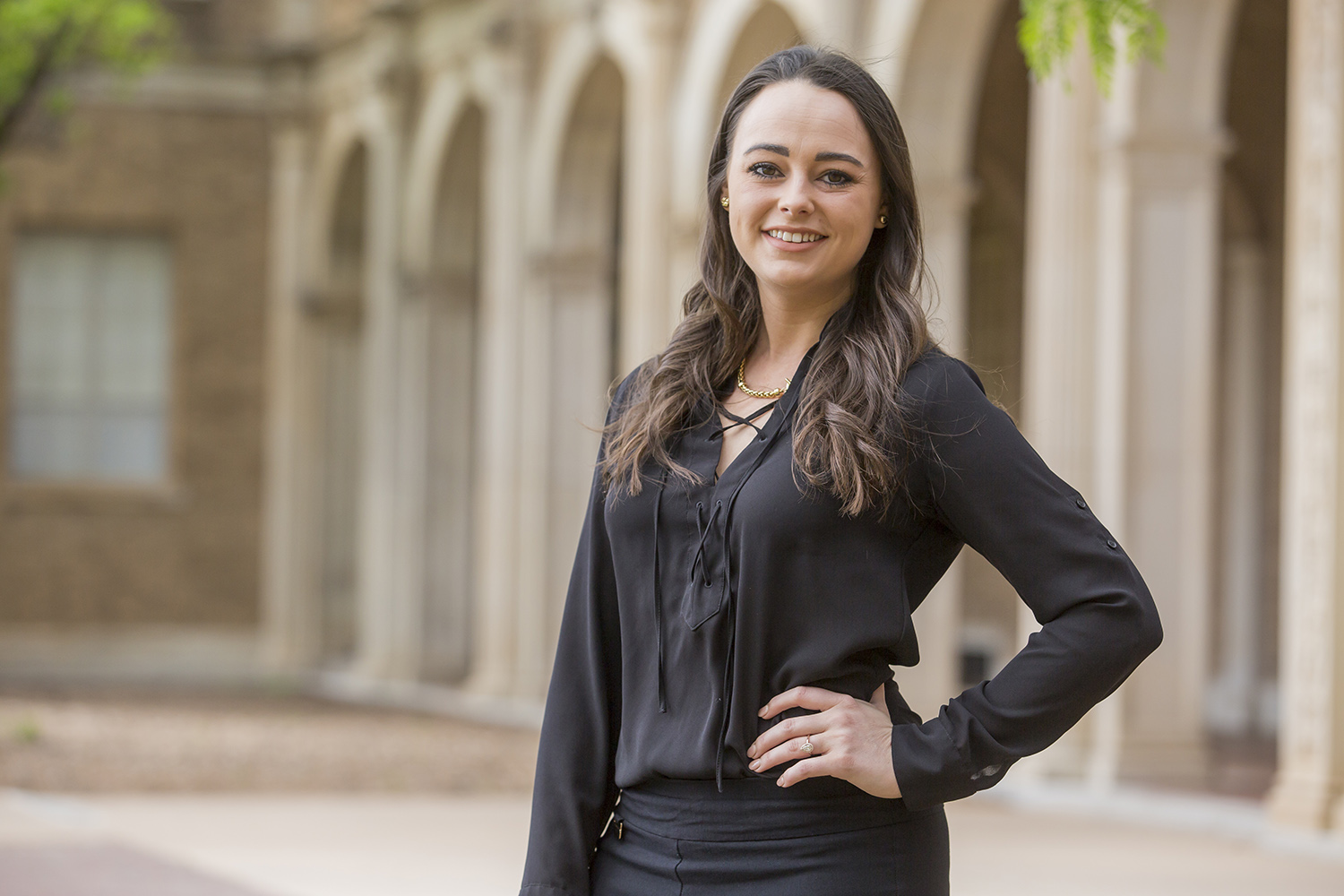 The agricultural industry is a staple in Lubbock and the South Plains. People all over Texas and the U.S. rely on it for simple luxuries, like milk, corn, eggs and beef. But many West Texans live and breathe one agricultural icon: cotton.

Shelby Young, a graduate student who will graduate in August with her master's degree in plant and soil science through Texas Tech University's College of Agricultural Sciences & Natural Resources, has been surrounded by agriculture her entire life.

"I grew up in a rural community outside of Plainview," she said. "Both my parents were involved in agriculture, so I've always been around it."

While in high school, Young's interest in cotton became more prominent. She worked for Texas Agrilife Research in Halfway and continued working in the cotton industry while pursuing her bachelor's degree, also in plant and soil science, at Texas Tech.

"I worked for a cotton geneticist at the United States Department of Agriculture's Agricultural Research Service while I was an undergraduate, so I got really interested in cotton production," Young said. "Texas and the Lubbock area are a hub for cotton. It's kind of the celebrity crop of the area, and it's a really interesting crop."

As Young learned more about cotton, her plant pathology class piqued her interest and convinced her to pursue a concentration in crop protection.

"When I took plant pathology, I was just enthralled by all these things that kill plants and how cool and weird they are," Young said. "So, when it came time to decide what I wanted to do for my master's degree, I decided to stay in science for a bit longer and focus on crop protection, specifically cotton diseases."

One disease that plagues the cotton crop is Verticillium wilt, which reduces water and nutrient flow and causes the crop to turn yellow or white and the leaves or stems to wilt. Verticillium wilt is caused by the soilborne fungal pathogen Verticillium dahliae.

"My master's thesis is working on how to detect Verticillium dahliae and how to best detect how much is in the soil," Young said. "I did a field trial looking at different cotton-disease management strategies that included seed treatments, varying the planting date and varying the seeding rate, which is how close your plants are together.

"Pretty much all plant diseases are really dependent on what the environment is doing at the time. So, a change in temperature, a change in moisture can trigger a disease to flare up where you might not have seen signs of it coming beforehand. Little changes like that can really make a big difference."

While working on her master's degree, Young traveled to different conferences to learn more about the industry. A chance meeting at one of those conferences led her toward Australia.

"I met Dr. Karen Kirkby at the American Phytopathological Society conference in San Antonio," Young said. "She's an Australian plant pathologist who works with cotton. She had some connections through Texas Tech. We were talking about how we do things in our lab at Texas Tech, how they do things in their lab in Australia, and what we were all working on. We found some differences in how we go about things. So, we decided to do a little comparison of how they do a certain method and how we do it.

"It really opened up those lines of communication. Through that, I was able to go to Narrabri, Australia, and pretty much hang out in their lab, meet all of their people, meet growers and explore a little bit."

With so many differences between Lubbock and Australia, one similarity is the climate.

"It's hotter and maybe dryer sometimes, but cotton production is really big in Australia," Young said. "I was surprised."

The second time Young visited Australia, she went to a few conferences that centered on cotton disease.

"I went to Griffith, New South Wales, for FUSCOM," she said. "It used to be just for the disease Fusarium wilt, but now it's an all-cotton disease conference. It's mainly researchers, but growers and industry folks like seed people go to that one, too. It's pretty small, but everybody knows each other, and it's very familiar.

"They get a lot done in that conference. Everybody says, 'Here's what we've been working on this year. What do we need to do next year?' And it's like an open communication channel with the growers so you know what they're seeing in their field, even if you don't go look yourself. The second conference I attended was the Australasian Soilborne Diseases Symposium, and it was in Adelaide, South Australia."

The Fulbright U.S. Student Program is one part of the Fulbright Program. It was established in 1946 under legislation introduced by then-Sen. J. William Fulbright of Arkansas and is sponsored by the U.S. Department of State's Bureau of Educational and Cultural Affairs.

Young applied to the Fulbright Program in hopes of continuing her cotton disease research in Australia.

"There are two ways you can go with applying to the Fulbright U.S. Student Program, one's teaching English, and one's research," she said. "You propose a research project to them, and you get an affiliation letter from a university. Western Sydney University is my university affiliate, and I also obtained an affiliation with the New South Wales Department of Primary Industries within the Australian government. It's kind of like Texas Agrilife, structurally, but specifically for cotton.

"So, I proposed a field trial looking at Verticillium wilt, which is a disease we have here in Lubbock as well as throughout our cotton growing areas in the United States. I'll look at Verticillium wilt and see what happens with different nutrient levels of nitrogen, potassium and also different irrigation levels."

After receiving help with the application from Wendoli Flores, the director of the National and International Scholarships & Fellowships Office in the Honors College, and a large amount of patience, Young was accepted as a Fulbright student.

"My official program start is sometime in July, and I'll be in Australia for 10 months," she said. "The grant will cover my living stipend for 10 months. Wendoli is the coordinator for support from Texas Tech during my time in Australia."

Though Young is excited to continue working on her research in Australia with Kirkby, there's another aspect to the Fulbright grant that she finds just as inspiring.

"One of the really cool things about the Fulbright is you have to have a community engagement plan, and that's almost as big of a part of the program as the research is," she said. "Since my university affiliate is the Western Sydney University, which is located in a suburb of Sydney, I've been looking and they have women in agriculture groups, opportunities to mentor high school kids, and things like that.

"One of the things I want to find is the Australian versions of their cotton and corn-grower groups and the agricultural groups, because there is a group for everything."

Young believes the give and take of information is what makes the Fulbright Program special.

"One of the main initiatives of the Fulbright Program, when it was created, was to exchange information both ways," she said. "So, the affiliates in Australia are getting a Fulbright Scholar over there, but Texas Tech is getting that Fulbright Scholar back. The exchange of information is going to be really exciting, because I know I'm going to learn so much outside of what I listed on my research proposal. I know it's going to be better than I expect."

As if earning a master's in plant and soil science wasn't enough, Young recently was accepted to the master's program in agribusiness through Texas Tech's Department of Agricultural and Applied Economics.

Unlike writing a thesis paper for the plant and soil science master's degree, Young will have to complete an internship and a research project for the agribusiness master's program. She will use her time in Australia to fulfill those requirements.

"With the internship and research project requirement for the agribusiness master's degree aligning with the timing of my Fulbright program, I will be able to get credit toward my degree and explore financial and economic aspects of my research alongside the science," Young said.

With the next few years of her life planned, Young is looking forward to representing Texas Tech and bringing Red Raider spirit to Australia. She also has reflected on how the university has helped shape her personally and academically.

"I really think a big part of how Texas Tech has enriched my educational experience by being here as opposed to another university is by our community involvement, especially in agriculture," she said. "It's just such a close-knit community within Texas Tech, and also within the agriculture industry in Texas and the United States. By choosing to come to Texas Tech, I've had access to a lot of information and people from the industry that's really helped me build lasting relationships, learn a lot more and have incredible experiences outside of the classroom.

"Maybe it's nostalgia because I'm about to graduate, but I'm really feeling that Red Raider spirit. Everybody has such a good sense of humor, but a lot of really amazing work gets done. I think that's really what has made my time at Texas Tech extremely valuable. The personalities and that connection with the local people, and the West Texas way people treat each other, really warmly, and with a lot of respect, and just that West Texas charm of Texas Tech, I think that's really what fosters those collaborations and really keeps close ties with the community and the industry."