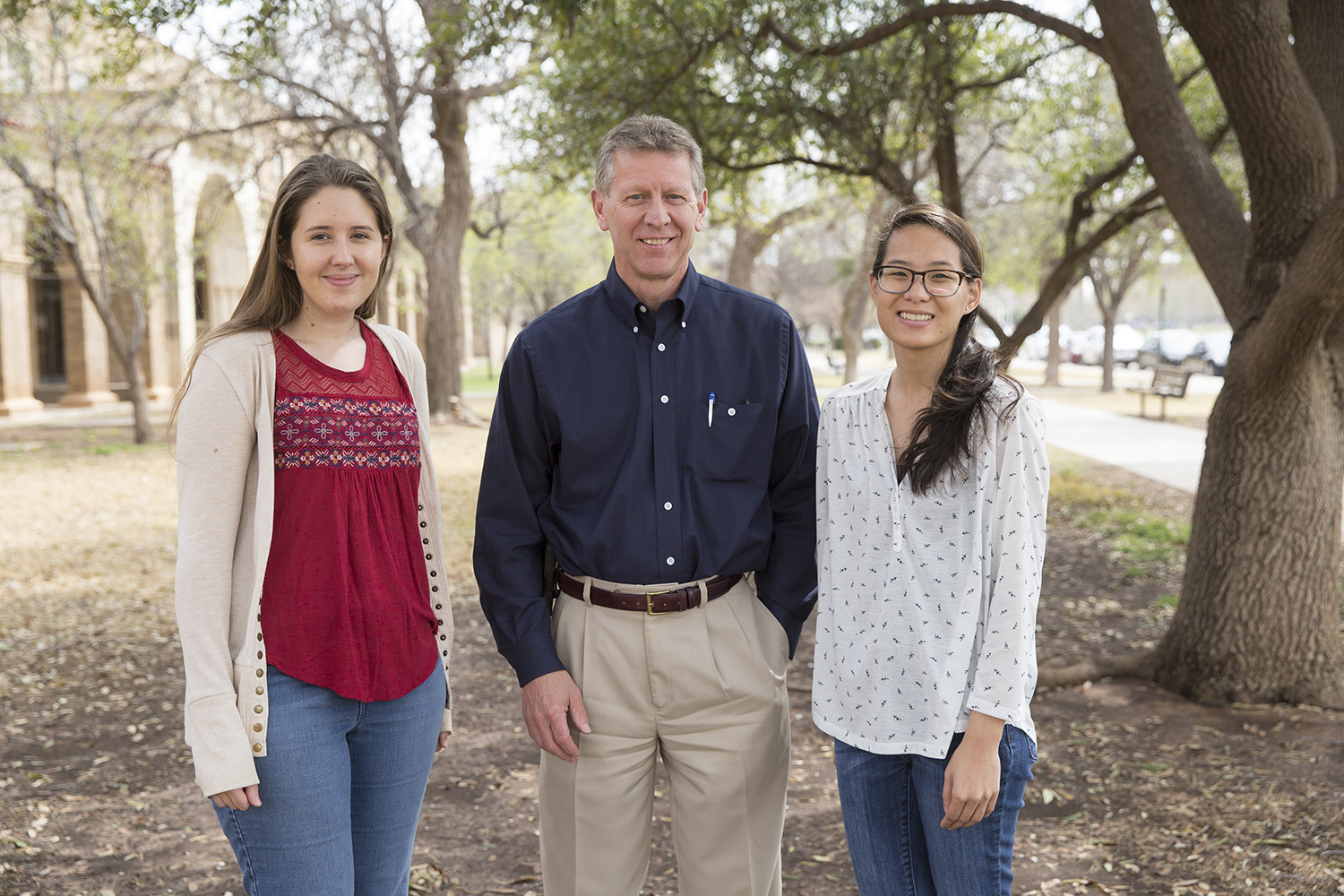 The student-run organization is open to all majors.

Water is a basic necessity every person needs and deserves. However, not everyone has access to clean water. According to a report from the World Health Organization (WHO) and UNICEF, 2.1 billion people lack access to safe, readily available water at home, and 4.5 billion people lack safely managed sanitation.

Though there are still many people who need help obtaining clean water, the Texas Tech University chapter of Engineers Without Borders (EWB-TTU), an entirely student-run organization, was able to produce a means for the development of sanitary water for a small community in Panama.

Engineers Without Borders USA was officially founded in 2002. According to the EWB-USA mission statement, the organization "builds a better world through engineering projects that empower communities to meet their basic human needs and equip leaders to solve the world's most pressing challenges."

In 2005, Clifford Fedler, a professor in Texas Tech's Department of Civil, Environmental & Construction Engineering in the Edward E. Whitacre Jr. College of Engineering, decided Texas Tech should have its own EWB chapter.

"I knew of the national chapter of the EWB, and I thought it was interesting," Fedler said. "I saw it as a unique opportunity for the students."

"I had heard of Doctors Without Borders, but never engineers," Pizzini said. "So, when I came to Texas Tech, I heard about it through one of the fairs, started going to meetings and learned more about their project."

Jasmine Tran, a senior environmental engineering major from Houston, learned about EWB-TTU in a similar way as Pizzini.

Though Fedler helped EWB-TTU launch in 2005, the group's first project, which wraps up this summer, didn't begin until 2009. The group was tasked with helping the Naso people in Solong, Panama, gain access to clean drinking water by building two sand filtration units and one rain catchment system.

EWB-TTU originally had a two-year timeline for the Panamanian project, one year to complete an assessment of the location and its needs and to raise money, and one year for the students to complete the engineering aspect. Unfortunately, Mother Nature had different plans.

"In that two-year time period, the water-catching system they had initially installed was washed away by a flood, and we had to start over from the beginning," Fedler said.

After the flood, the EWB-TTU group also discovered another organization was building a dam on the river to provide hydropower upstream from where the Naso reside. Due to the dam, the Naso would be losing a lot of the water from the river.

"The Panamanian government said they would provide the villagers with drinking water from a nearby lake," Fedler said. "Basically, they just connected a pipeline into the Naso's existing pipeline system. Their pipeline system leaves a little something to be desired. It's definitely not clean under any circumstances. Even the water they get when it reaches the people is not so good.

"We even tested the water up at the lake and, supposedly, it was going through a rock filter. All that rock filter is going to do is clean out big things like leaves or some twigs, and that's about all it will manage. We then had to totally reconfigure our thought process on how we were going to design their water treatment system. So we had to basically start from ground zero again."

Tran, who also is the internal vice president of EWB-TTU, and Pizzini were able to make the trip to Solong to help facilitate the building of the sand filtration systems, a coveted position since the group could only afford to bring a handful of students.

That's not to say those students who the group funded were the only ones allowed to attend the trip.

"We had no restriction on the number of people who could go," Fedler said. "If students had their own financing, and they wanted to do it, then we welcomed them to go."

Thankfully, neither Tran nor Pizzini had to put their first-aid training to use, save for providing the occasional bug spray. The journey to get to the village, however, was much more precarious.

"We were on the ground for seven days," Fedler said. "It's quite a trip to get there because we had to travel from Lubbock to San Jose, Costa Rica. Then, it was a six-hour bus ride to get to the Panamanian border. Then, we had to cross the border and get a cab to the city of Changuinola, Panama. From there, we had to get another cab to taxi us to the water. Then, we had to get on a boat and go upstream to get to Solong. It was quite a process. When you're going someplace that remote, you have to estimate it's going to take anywhere from a day-and-a-half to two days just on travel time."

After the flood and dam fiascos, Fedler and the students went back to work and built sand filtration systems in the most-needed areas in the village.

"We built two small, somewhat portable sand filters for the Naso people to be able to run their water through to treat it to have quality drinking water," Fedler said. "One was built at the local school because that's where all the young kids are going to be during the day. Then, we built one in the middle of a small section of the village. That way, all of the homes around that area would have the ability to use that water."

Using sand as a filter is a better and more efficient way to produce clean water than rocks because the sand actually helps remove unwanted microorganisms.

"The sand has three different layers, so it's very fine at the top, then it gets a little thicker, and a little thicker at the bottom," Fedler said. "As the water is flowing through the sand, any kind of microorganism is going to get filtered out in the sand in that top layer. It forms this biological layer on the top. So what's happening then is that biological layer is literally cleaning that water and the rest of the sand is essentially filtering it as well. So, in other words, e. coli and things like that will be removed from the water. Rocks being large, there's no way they could filter out microscopic particles."

The sand filtration systems were designed to be cleaned about every six months to a year, making the low upkeep ideal for a remote part of the world.

"All they have to do is scrape off the top half-inch layer of sand and then replace it," Fedler said. "Then they put the water back into the filter and let the water run through it for a period of about two weeks before they start drinking the water again. What we recommend they do is alternate the use of the two units. As they build more units, then they'll have much more flexibility."

EWB-TTU wanted to make sure the villagers were able to not only use the sand filtration units the team built but also replicate them and build more at a low cost using local materials.

"We estimated that each unit could be built for around $170," Fedler said. "That's not an extreme amount of money. They can buy materials at their local hardware store, and they also have the ability to apply to their local environmental agency to get funds to help with the cost."

"We wanted to involve UTP because we wanted to educate the students and the local people so they can build more filters on their own," Fedler said. "We left them with manuals in their native language on how to build them."

"I think the most rewarding part is actually going to another country and helping the villagers get clean water," Tran said.

"Traveling to the village and doing our project implementation, you see the lives of people very different from yours and how they live and the resources they have," Pizzini said.

With the word "engineers" in its official name, one might think only engineering majors should join EWB-TTU. Tran points out that, despite the name, students from all majors are welcome.

"Other students from various majors can help out with this organization," Tran said. "Even though they may not be savvy in the engineering or design aspect, there's a lot of things that go into the organization, such as financial budgeting. We also have to understand different cultures, so we need translators. One student who came to Panama with us is a human development and family studies major. With his background knowledge, he understood where the villagers' mindset was and was able to effectively communicate with them without offending them."

Pizzini noted that EWB-TTU truly listens to its members.

"You definitely feel like your voice is heard and that you're making an impact," she said. "There are a lot of organizations where they're so big or there is not much direction, where you don't feel like you're doing anything; you're just a voice in the crowd and not necessarily listened to. But with EWB-TTU, they really do value your input because they know these projects take years to implement. So, we value our younger members because we know that we have to pass it on to them."

Fedler wants to encourage students to consider joining any student organization because of the positive impact it can have on their lives.

"It's a great experience for students to get involved with student organizations if they can figure out how to manage their time and make sure it doesn't negatively affect their academics," Fedler said. "At the same time, I try to encourage them by saying, 'If you take out this one year of your life, and live for, 80-90 years, you find that it's really very small amount of your lifetime. And you can devote that year to doing something that's useful and good for people who don't have the ability to get what we have here in the U.S.' I use that to try to encourage them to get involved and put some time and attention into it and actually get something out of it. I don't think any one of them has regretted a single moment of their time."