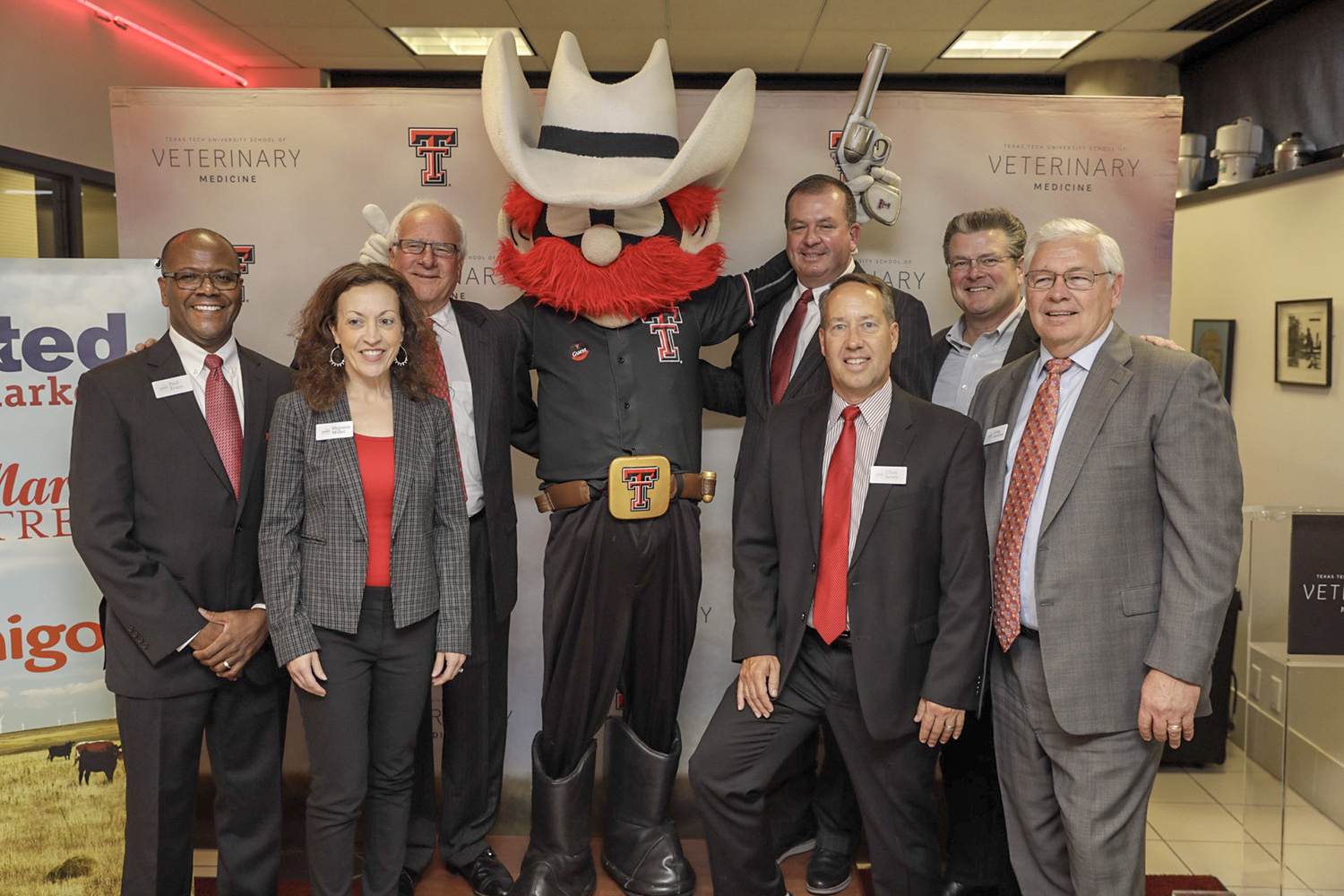 The grocery chain was recognized during a reception for its $1 million commitment in support of the initiative to improve veterinary education in Texas.

Every day, thousands of shoppers enter a United Supermarkets store, some on their weekly grocery run, some just looking to pick up a quick dinner, some finding everything they need for a tailgate or cookout.

"United Supermarkets' long-standing commitment to our communities and Texas Tech University can't be overstated," said Lawrence Schovanec, Texas Tech president. "The United Family has contributed generously to many programs at the university and we are grateful they have placed their support behind this important initiative. I'd like to thank Robert Taylor, Sidney Hopper and everyone associated with United Supermarkets for once again supporting Texas Tech University."

United recognizes the role the Texas Tech University School of Veterinary Medicine will play in ensuring the health of the industry through its efforts to improve veterinary care across the country. United Supermarkets became the latest trailblazing donor for the veterinary school effort through a gift of $1 million, which serves as an example of United's commitment to give back to the communities it serves.

"The Texas Tech School of Veterinary Medicine is critically important to this state and to the more than $2.5-billion business we operate in Texas," said Robert Taylor, CEO of The United Family. "As food distributors, we rely on the production of Texas beef for guests in our 95 stores in Texas and New Mexico. The shortage of veterinarians in rural communities of the Panhandle negatively impacts production in an area where the majority of the beef we distribute is produced. This gift is an investment in the communities we serve and in the future of Texas."

"The founding philosophy of our business is to provide quality and value as we serve our guests and are involved alongside them in our communities," said Sidney Hopper, president of The United Family. "By providing funding for the Texas Tech School of Veterinary Medicine and student scholarships, we are reflecting those founding principles, as we invest in a quality education, at a great value, which will ultimately serve our guests.

The United Family operates 95 stores in Texas and New Mexico under the banners of United Supermarkets, Market Street, Albertson's Market, Amigo's and United Express, in addition to a distribution center and other ancillary operations. United Supermarkets first came to Texas in 1949 with a store in Vernon, expanded to Lubbock in 1956, followed by Wichita Falls in the 1960s and Amarillo in the 1970s. In 2013, United Supermarkets LLC was purchased by Albertsons LLC.

The gift supports construction and development of the future School of Veterinary Medicine in Amarillo, student scholarships and will help revolutionize veterinary services throughout Texas' agricultural communities. Empowered by generosity, the school is designed to fulfill a growing need in these communities by shaping the future of veterinary education and enriching the state's agricultural heritage.

United Supermarkets is the latest of a group of individuals and businesses who have stepped up to support Texas Tech's vision of implementing a planned School of Veterinary Medicine in Amarillo. The company joins Jerry and Margaret Hodge, The Don and Sybil Harrington Foundation, Amarillo National Bank, Caviness Beef Packers, Happy State Bank, Cactus Feeders and other philanthropic leaders, along with the Amarillo Economic Development Corporation, that have recognized the need for and are supporting the establishment of the School of Veterinary Medicine, which is designed to address the need for more large-animal veterinarians in Texas in a cost-effective and innovative manner.

"It would be hard for me to fully express to United how much the City of Amarillo appreciates their contribution to this project," Amarillo Mayor Ginger Nelson said. "The way our community has come together to support educational opportunities for local students is just incredible, and we're all grateful for their support."

In August, the Texas Tech University System's Board of Regents advanced the university's plans to establish a veterinary school by approving the new school, its degree plan and funding for preliminary designs for the school.

More than $90 million has been raised in non-state funds for the project. Texas Tech is seeking approximately $17.35 million from the Texas Legislature in the 86th legislative session to help support initial operations.

The school is designed to enroll 60 students per year for a desired enrollment of 240 students for the four-year program. The school also would potentially serve 150-200 graduate students who are not seeking a doctorate in veterinary medicine, as well as an academic staff of 90.