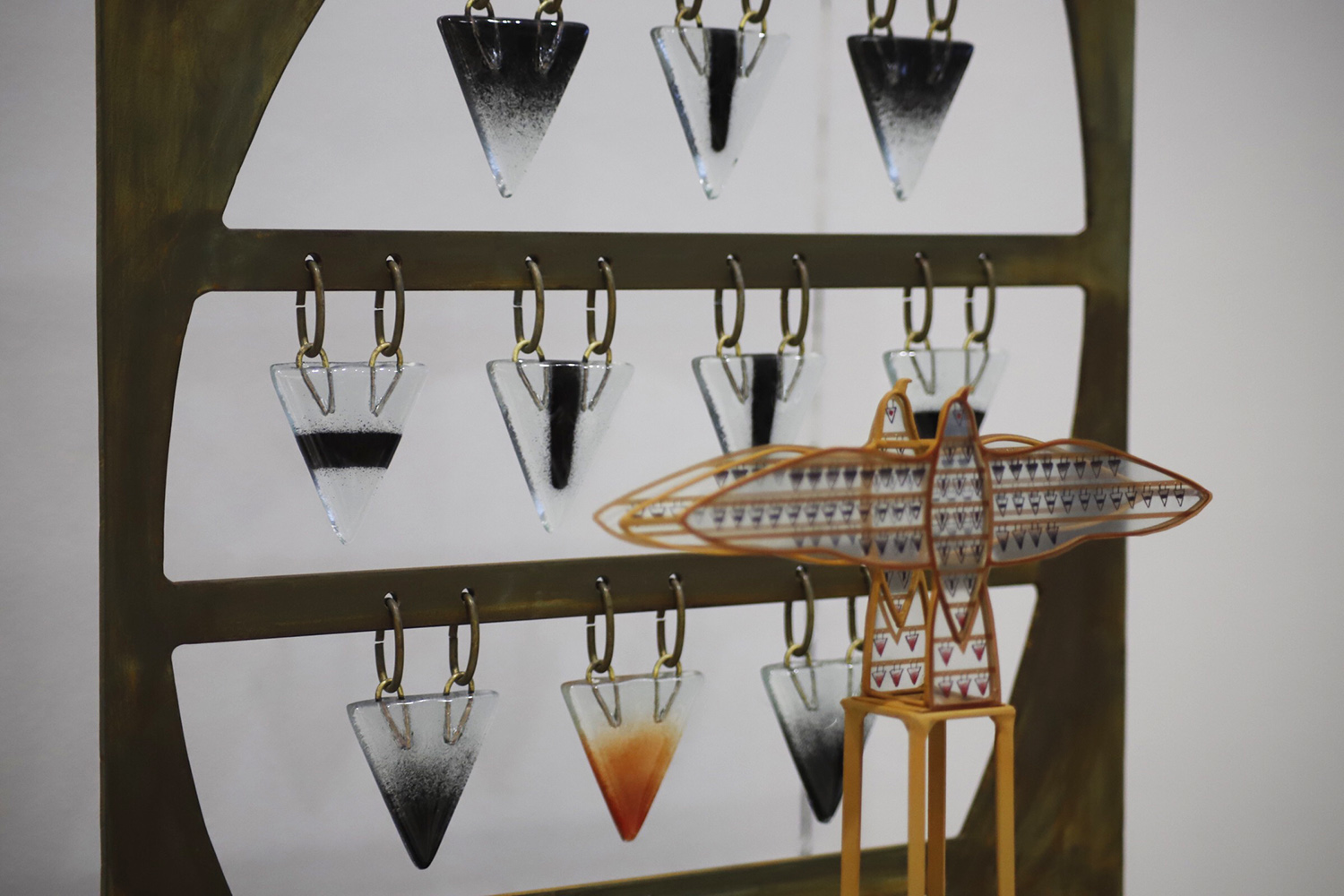 "Red Tail," the newest addition to the collection of the Texas Tech University SystemPublic Art Program, now greets visitors to the Museum of Texas Tech University. The 20-foot-tall sculpture of steel and fused glass, created by artist Peter Mangan, represents a red-tailed hawk and complements the new arroyo landscape at the museum's north entry.

Both the sculpture and the landscape were dedicated in a ceremony at the museum on Friday (March 8).

"The combination of the artwork 'Red Tail,' by Peter Mangan and the landscape arroyo makes for a powerful entrance statement to the Museum," said Gary Morgan, executive director of the Museum of Texas Tech. "Arroyos are mostly dry but occasionally run into floods, and they manifest so much of West Texas with its long dry periods interspersed with heavy rains. The red-tailed hawk is one of the most emblematic Texas birds; its mournful cry is often heard long before the bird is seen far overhead. Vast open vistas, skies that go on forever, rains that refuse to come until they fall in a deluge: this is life on the Southern High Plains."

From proposal to installation, Mangan said the entire process to create the piece took about a year. The sculpture is composed of a steel base, created to mimic the unique shape of the museum's building, and a steel bird with a 10-foot wingspan, double that of the real bird.

Within the steel frame of the bird's body are 136 fused-glass pieces, inlaid with colors to match the actual bird's feathers and designed to move and shimmer in the ever-present Lubbock winds.

"They wanted a sculpture that would interact with the wind, and I had done this type of piece before where the wind is supposed to move it and kind of animates the sculpture a little bit," Mangan said. "I love the transparency and the color. The colors are fused in, so they'll never fade. It's kind of a paradox. Glass is really more permanent than metal, it'll outlast it, but at the same time, it has that transparency and fragility."

Installation of the piece, which will be illuminated at night with LED (light-emitting diodes) lighting, began on Tuesday (March 5).

"The stand, the sculpture and the lighting were the three components that all had to come in at the last minute and work together," Mangan said. "The glass was applied at the museum site. This was really the first time I ever saw it completely put together."

For Mangan, the sculpture symbolizes more than just the wildlife of the area.

"It refers to the glories of nature, freedom and aspiration," he said. "Hawks are known for their super sense of sight, an appropriate symbol for people about to enter a museum."

Emily Wilkinson, director of the Public Art Program, said Mangan was selected from a group of 60 applicants from across the globe.

"His vision for a sculpture that was subtly interactive with the wind and also able to relate to the arroyo was the perfect fit for this project," Wilkinson said. "We are thrilled to see his vision realized with this sculpture. 'Red Tail' and the landscaping addition to the museum are a perfect combination to enhance the north entrance to the already beautiful campus at Texas Tech University."

Mangan said it's an honor to be included in the university's public art collection.

"When I arrived in Lubbock and toured the Texas Tech campus, I was very impressed with the artists and interesting pieces of art. I noticed that the Public Art Collection is one of the top-rated university public art collections in the country," Mangan said. "I'm very grateful for Texas Tech to choose me for this project. It's allowed me to stretch my capabilities, and I'm very proud to be part of its collection."