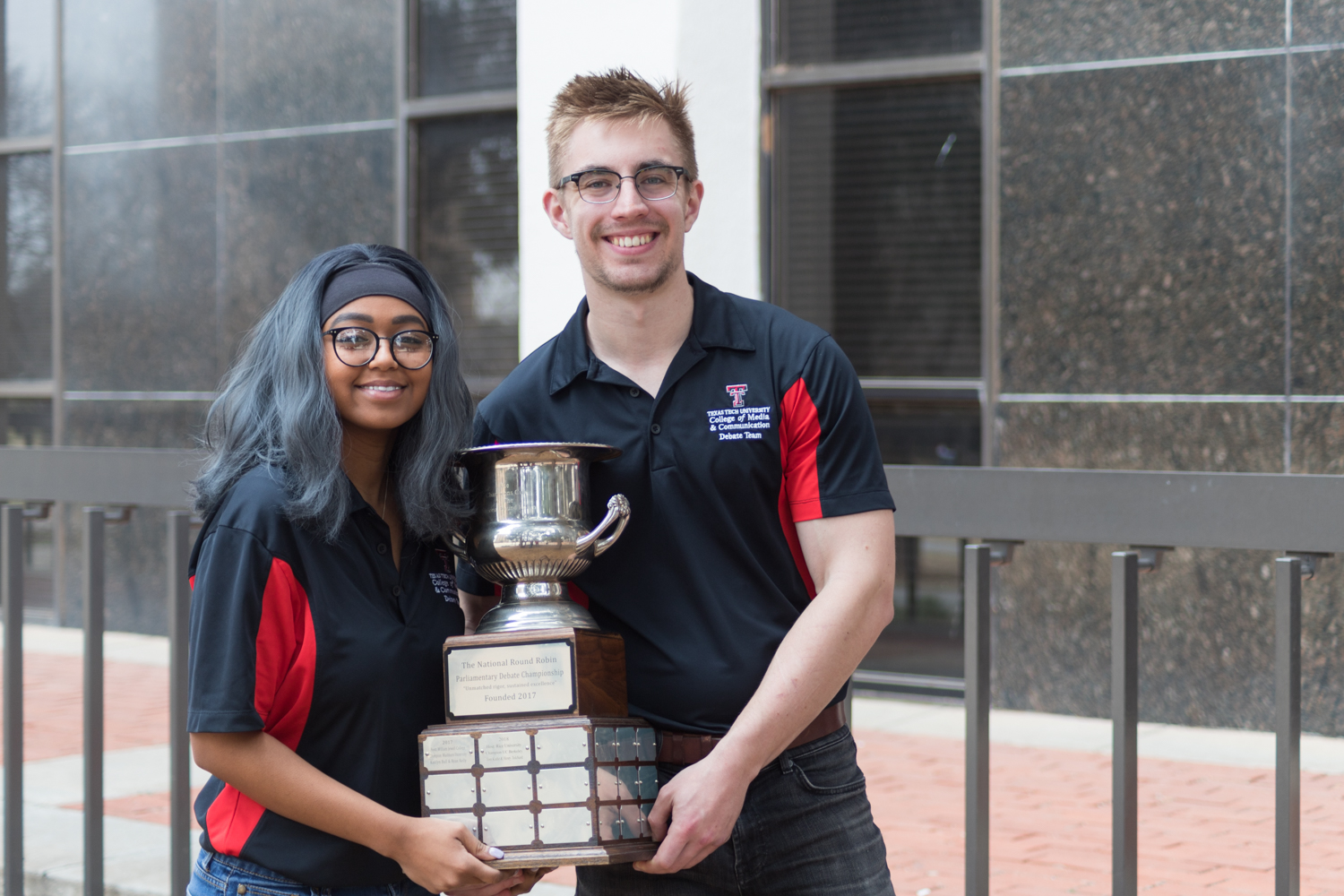 Max Groznik and Fiker Tesfaye bring home the most wins at a tournament in program history.

As an unlikely pair, they never thought they would be national champions. Max Groznik and Fiker Tesfaye are members of the Texas Tech University Parliamentary Debate Team through the Department of Communication Studies in the College of Media & Communication.

Recently, the pair were named national champions at the National Round Robin debate tournament at the University of California-Berkeley. This was the third year of the tournament, and it is the first of three national tournaments that occur annually.

At this event, the top two teams from each participating school are invited to compete. This makes the competition very intense and difficult, because only the best from each school are debating. The first day of competition includes five preliminary rounds, and at the end of the day, the six teams with the greatest number of votes from the judges move on to the next round. The team with the highest number of votes at the end of the tournament wins the championship.

Parliamentary debate is a limited-preparation event, meaning teams don't know the topic of the debate prior to the event. Teams receive a resolution, or topic, only 20 minutes before the round. They then have 20 minutes to prepare and discuss their side of the debate before entering the round. The debaters must have a thorough knowledge of politics, current events, modern philosophy and other topics vital to a well-rounded education in liberal arts. Teams have 44 minutes to convince the judges they are experts on the topic they received.

Groznik and Tesfaye won all their debates at the tournament, which is something Adam Testerman, director of forensics, an instructor in the College of Media & Communication and coach of the debate team, said he has never seen before. Tesfaye also won the top speaker award.

"I believe they're the first team from Texas Tech to ever finish the regular season as a top team," Testerman said. "In some ways, it's how you compete at the national tournament that ends up defining you. But in other ways, it's more impressive to win the regular season title, because that's excellence over a long period of time. No one really has come close to touching this team, in terms of consistently performing at the highest levels during the biggest tournaments throughout the regular season."

Tesfaye became the first member of the debate team to win all three top speaker national championships in the same year. Testerman said she is one of two female black women to be honored with the top speaker achievement on the national level.

Groznik has been debating since he was in high school. He transferred to Texas Tech from a small, private school in Colorado his junior year of college after reaching out to Testerman about joining Texas Tech's debate team in 2017. Groznik said his previous college was having trouble funding the debate team.

Tesfaye chose to attend Texas Tech because she said it was affordable to her. She didn't have any debate experience before joining the debate team her freshman year in 2015, but knew being on the team would help with her career goal of being a lawyer.

"When I decided to come to Texas Tech, I thought it would make sense for me to find the debate team," Tesfaye said. "It took me a few weeks to find them, but I really did want to try, even if it meant trying to learn how to debate in the first place."

Both Groznik and Tesfaye are not majoring in programs within the College of Media & Communications. Groznik is a political science and history double major with a minor in philosophy. Tesfaye is a sociology major with a concentration in criminology and a minor in communication studies. The debate team members are in many areas of study, showing the interdisciplinary nature of the program.

Testerman said the team hasn't always been so successful. When he took over the program in 2015, he began rebuilding the team so it could again be the top-tier organization it had been in the past.

"We sort of felt like we got to kick it off anew whenever I came in," Testerman said. "I started with one of our assistant coaches, who I'd coached with at a previous job. We both came in and thought that it was an opportunity to do something really special. All the support was in place, and we have an incredible student body to find great debaters from. It just took some tender, loving care."

Tesfaye never thought she could be the winner of a national championship title. She said it's wild to be able to win for her school and bring home the trophy.

"People were congratulating us and telling us how we were representing our school and our team so well, and it just feels nice to be recognized," Tesfaye said. "But, it also feels nice because we made it. We have done the thing that we set out to do."

With the debate season coming to a close, there are only two national tournaments left. Both Groznik and Tesfaye will be graduating this spring, and both have heavy hearts.

"I mean, it's really weird only having two tournaments left, because I've spent a lot of time doing this," Groznik said. "But I'm looking forward to those tournaments. They should be really fun, and two of the topics for the National Parliamentary Tournament of Excellence were written by members of Texas Tech debate. It's really cool to see that we're still being represented."

Tesfaye said she's going to be sad leaving her team behind.

"We've spent four years together," Tesfaye said. "We're like a little family, and it's really hard to be leaving after these last couple tournaments."

Testerman said half the team will graduate after at the end of this semester. It is difficult to lose so many members and still come back to win tournaments.

"It's both sad and frightening," Testerman said. "I mean, last year and this year have been the top years we've ever had. It's hard to look at it in any other way. We start all over again next year, which is exciting and terrifying."