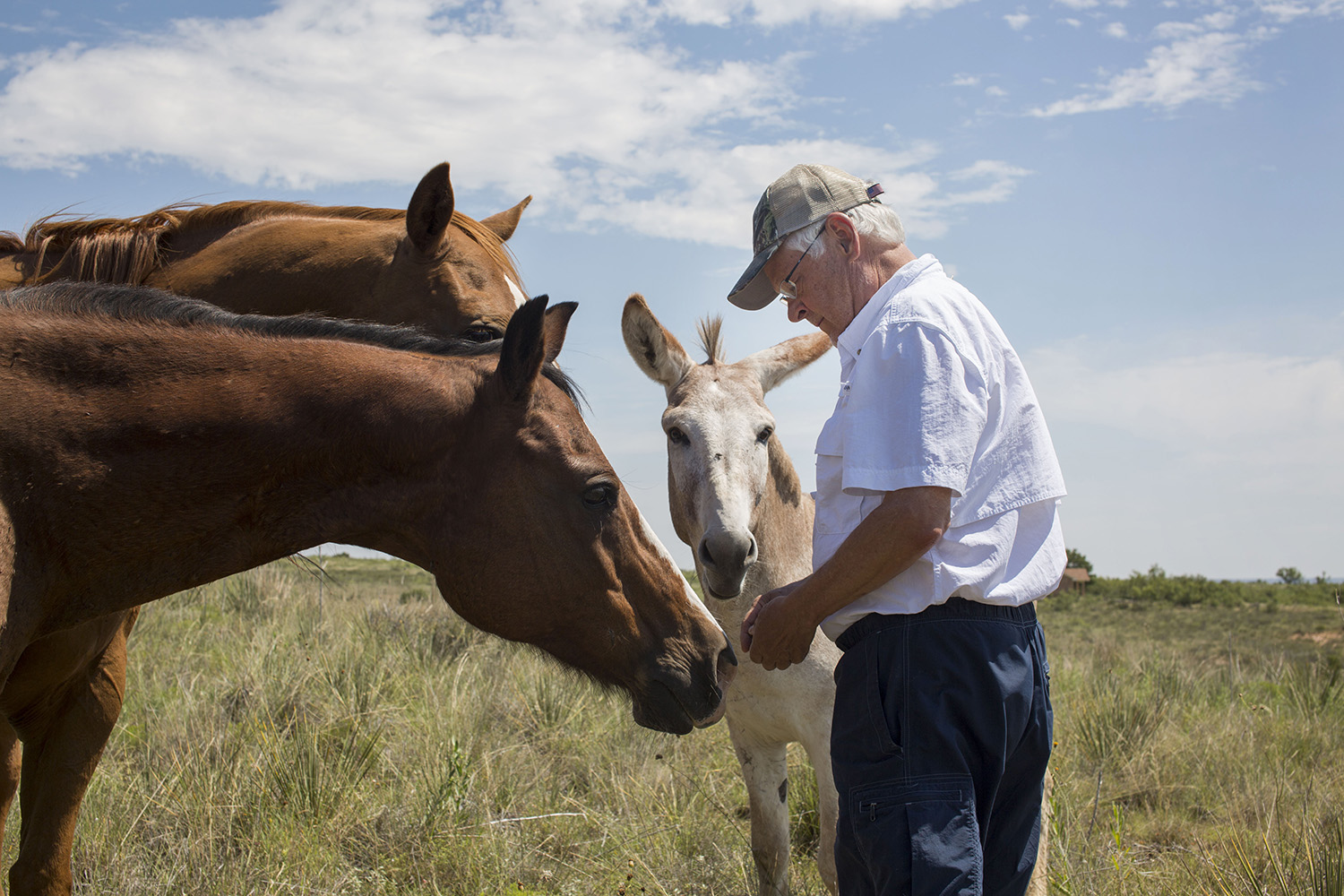 The college’s reputation and relationships with the agricultural community provide great assets as Texas Tech moves toward opening the School of Veterinary Medicine.

A critical component to Texas Tech University's effort in establishing the first School of Veterinary Medicine in Texas in more than 100 years has been building relationships with the veterinary medicine community throughout the state as well as those they serve in the large- and food-animal industries.

Beef and cattle businesses such as Caviness Beef Packers and Cactus Feeders, as well as financial institutions like Amarillo National Bank and Happy State Bank, have enthusiastically stepped up to financially support the initiative. Veterinarians and ranchers representing organizations such as the Texas and Southwestern Cattle Raisers Association (TSCRA) and the Texas Cattle Feeders Association (TCFA), who are important partners with severe needs that the Texas Tech veterinary school plans to meet, have also shown their support.

If there's any question about how critical these relationships are to the success of any initiative, one only has to look at those that strengthen the research and education of students produced by the College of Agricultural Sciences & Natural Resources (CASNR), particularly the Department of Animal & Food Sciences, which itself will play a key role in the success of the School of Veterinary Medicine.

From connections with the livestock and beef industries to its national prominence in the area of meat science that is crucial to cow-calf producers, the work being done in the college and the department has made Texas Tech a leader in food safety and animal research. Much of this work is done with an application in mind.

"We've always had a strong presence in animal health," said Texas Tech Provost Michael Galyean, the former dean of the college and professor of ruminant nutrition. "The department has a long history, particularly in the last two decades, of working very closely with the industry and working on the problems that are going to complement the same issues the veterinary school is going to face. So, in a sense, Texas Tech will have all the pieces – how you feed them and care for them, and how you deal with ancillary food safety issues."

Bill Brown, the new CASNR dean and also a professor of ruminant nutrition, says that some future goals for the college and its programs are to focus on the areas where it has unmatched strengths.

"Our faculty have outstanding programs in meat science, food safety and beef cattle production," Brown said. "Completing the circle by adding animal health through the School of Veterinary Medicine will build capacity and collaborations which will set Texas Tech apart in the nation and across the world."

While the School of Veterinary Medicine is separate and free-standing from CASNR, and has plans to offer specific graduate and professional degrees, it will benefit from collaboration with multiple colleges and schools throughout Texas Tech University and Texas Tech University Health Sciences Center.

As one of the university's founding schools, agriculture has been ingrained in Texas Tech's heritage since 1923. The university has developed a strong reputation in the agriculture industry, and today, Texas Tech has numerous experts in the CASNR faculty.

Guy Loneragan, a professor of food safety and public health in the Department of Animal & Food Science, is a licensed veterinary epidemiologist who has dedicated his life to improving animal and public health through research identifying pre-harvest practices that can help mitigate food-borne pathogens and antimicrobial drug resistance. He also has served as the university's interim vice president for research and is a member of several key organizations such as the TSCRA, TCFA, the Texas Veterinary Medical Association, the Academy of Veterinary Consultants and the National Cattlemen's Beef Association.

Since first announcing its plans, Texas Tech also developed a Department of Veterinary Sciences to serve as a link between CASNR and the School of Veterinary Medicine. The department brought in two outstanding faculty members in Vinicius Machado and Rafael Neves. Their work with dairy cattle seeks to prevent and reduce disease instances, increase milk production and improve reproductive efficiency.

"We have a lot of people who do a lot of things that interface very closely to veterinarians," Galyean said. "The neat thing about the veterinary school, for me, is because it's a new program, we have the opportunity to build the bridges to a department like Animal & Food Sciences and veterinary science here on campus that you don't normally get. Texas Tech the opportunity to tie it much more tightly together."

Not only on campus, but also at the CASNR farm near New Deal, the college has facilities that allow researchers to work with large animals on myriad health issues in real-time settings. The farm at New Deal is a research-scale feedlot that deals with many of the same health and management issues as commercial feedlots, giving potential veterinary students a real-world learning experience.

Galyean sees Texas Tech's facilities as being able to give CASNR students the ability to partner with veterinary students on research in an academic atmosphere that's conducive to learning and producing tangible outcomes for both.

He also foresees tremendous potential for collaboration between the veterinary school and Animal & Food Sciences faculty members on research the college and department routinely perform, be it on large food animals or small companion animals. Galyean sees it as a win-win for both that gives students interested in becoming veterinarians hands-on experience while they're undergraduate students.

"From a research standpoint, we have the chance to partner with people in the veterinary school on research that will give us some opportunities that you wouldn't necessarily see at other veterinary schools," Galyean said.

"I think there's going to be a natural, almost triangle, between the industry coming together with the people in CASNR and the veterinary school to build programs that are really going to start answering some of the big questions for the industry."